The pivotal moment where the path to unity began? 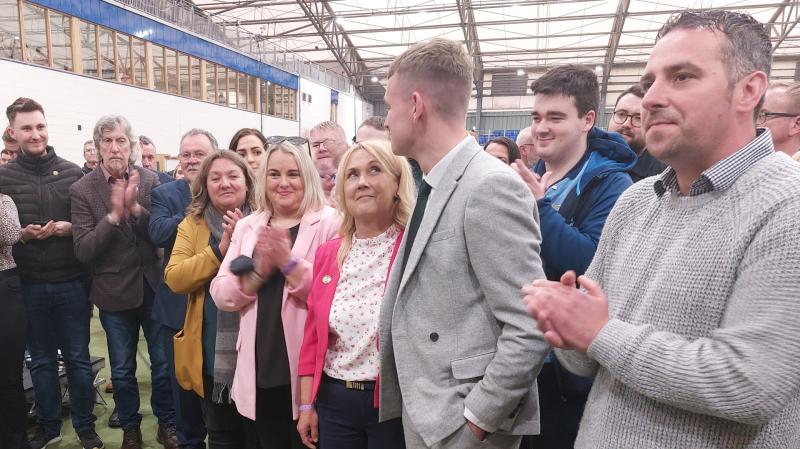 Sinn Féin Foyle Assembly candidates, Ciara Ferguson and Pádraig Delargy with their supporters at the count centre in Magherafelt.

Who would have thought this could have happened in 1921?

Just more than 100 years ago, the statelet that is Northern Ireland was created as a result of the partition of this island with the six counties remaining as part of the United Kingdom.

Despite arch-unionist, Edward Carson, instructing his followers in the North “not to forget the minority”, others had other ideas – as the statelet's first leader James Craig has been quoted as remarking, “a Protestant parliament for a Protestant people”.

The deck of cards were stacked against those of a nationalist persuasion. However, those cards have appeared to have flipped with Sinn Féin looking likely to be the biggest party in Stormont.

A seismic moment, especially when it doesn't seem that long ago that the party was a pariah, not just in Northern Irish politics but Irish politics as a whole.

And yet, in the Republic two years ago and in the North this weekend, it is Sinn Féin who have upset the old guard.

While their usurping of the SDLP as the main nationalist voice in the North might not have been of too much of a surprise two decades ago, to come out on top over the main unionist party of the day is a significant moment.

It may not result in a united Ireland in the near future, but should one come in the distant future, this weekend could well be the point in time when the first stepping stone to unity was laid.

Their performance in Foyle alone has put paid to the theory that the Derry branch of the party was in disarray.

Certainly their 'internal review' that saw high-profile figures such as Martina Anderson and Karen Mullen 'stepped down' from their MLA roles gave the impression of a branch in chaos.

Padraig Delargy's triumphant victory put paid to all of that and, in retrospect, the 'internal review' appears to have been a Cathartic moment.

The wide smiles of the Sinn Féin contingent might have been those of relief but of quiet confidence as well given the feedback on the streets that they had been getting when canvassing ahead of this poll.

They have been helped somewhat by a curious campaign by the SDLP in Foyle.

When it was announced that three SDLP candidates would be running in the seat, it was largely assumed that they would be seeking to take advantage of Sinn Féin's 'internal review' and be campaigning hard to rob their nationalist rivals of one of their two seats.

Instead, the SDLP, turned a lot of its attention in attacking the People Before Profit candidate Shaun Harkin.

While Harkin has shown himself to be an able performer as a Councillor on Derry City & Strabane District Council, it was a leftfield strategy to target a smaller party who did not hold one of the five Foyle seats.

Sinn Féin were braced for a serious attack from the SDLP and their three candidates – only it never really came.

If Sinn Féin were ever vulnerable from the 'internal review' fall-out, then by going instead for the smaller People Before Profit, the SDLP effectively had an open goal only to fire the ball into the wrong net.

Instead, Sinn Féin were allowed to regroup and rally not only their own core support but gain new voters as well.

As for the rest of the election in the North, one is reminded of a quote from the late David Ervine who had been leader of the Loyalist Progressive Unionist Party,

During an interview on BBC Radio Five Live in 2001, Ervine was asked what he would do in the event of a united Ireland. Would he leave or stay put?

He replied: “While I believe it is Northern Ireland's interests to stay within the United Kingdom, should a poll bring about a united Ireland, I would accept the result – I'm no a la carte democrat.”

While a united Ireland will not be the immediate outcome of Sinn Féin becoming the largest party in Stormont over the DUP, an eyes will be on the latter to see if they will accept the democratic mandate of the people.

Having collapsed the previous Executive, rumblings that the DUP would collapse the new one before it has even begun as they may refuse to be second-in-command to Sinn Féin have been growing.

Indeed it has been suggested that the DUP would also collapse the new Executive because of their dissatisfaction of the Protocol.

Kyle Paisley, the son of the late Ian Paisley who founded and led the DUP , posted on Twitter that: “Northern Ireland needs a functioning government as soon as possible. London will do nothing for unionists on the protocol, except break their word time and again.”

Being a la carte democrats is not an option for the DUP. However, unpalatable an election result or the NI Protocol maybe to them, the North needs a functioning Executive.

Because in four year's time, if the DUP felt they didn't have a good day this week, they may well have a worse one come the next Assembly Election.

But for now, this weekend belongs to Sinn Féin.

One day a united Ireland may come and those in Foyle, East Derry, Mid-Ulster et al could well be electing TD's to Dublin instead of MLAs to Stormont.

If that happens, then this weekend could well be the pivotal moment where the path to unity began.