Archbishop Martin pays tribute to families in their fight for justice 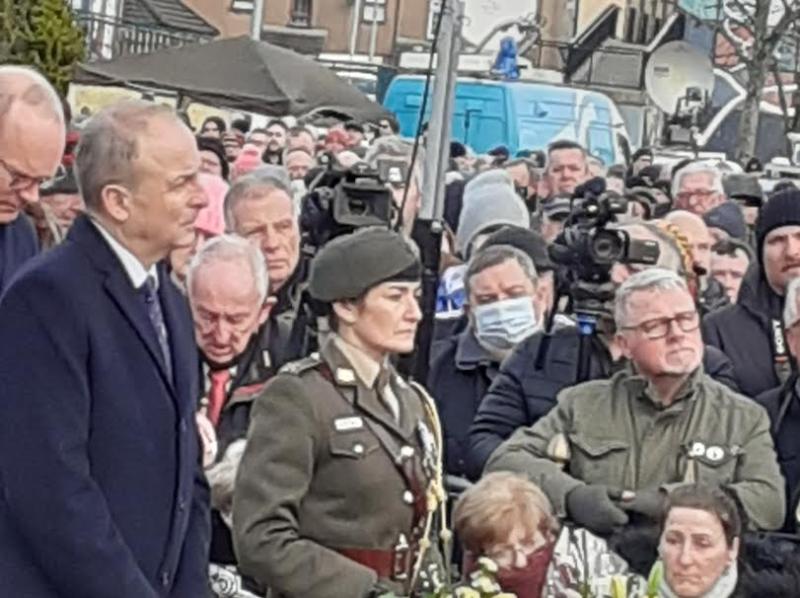 Taoiseach Micheal Martin has laid a wreath at the Bloody Sunday monument in memory of those killed in the 1972 massacre.

The Republic's Minister for Foreign Affairs, Simon Coveney, also laid a floral tribute at a memorial service held at the Bloody Sunday monument on Rossville Street.

The ceremony followed a Families Walk of Remembrance in which several thousand retraced the route of the ill-fated 1972 march.

Speaking at the memorial service, Michael McKinney, brother of William McKinney, one of those shot dead on Bloody Sunday, said the families fight to get those responsible prosecuted for their actions would continue.

Earlier, during an anniversary Mass in the nearby St Eugene's Cathedral, Archbishop of Ireland and Primate of All Ireland, Derry-born Eamon Martin,  paid tribute to the Bloody Sunday families.

Archbishop Martin said: “The horror inflicted on Derry on that day has thankfully been challenged and exposed.  We are grateful for the dignity, determination and example of the families, friends and neighbours of those whose lives were so cruelly taken on 30 January 1972, just a short walk from this Cathedral.”

“The shocked silence which fell on Derry when the shooting stopped that afternoon was compounded by the deliberate silence of governments and politicians who willfully ignored the truth.  Immediately the priests who had been present, tending to the wounded and dying, and many other eye witnesses, called it as it was: willful murder; shooting indiscriminately; no provocation.”

Later today, the annual Bloody Sunday March of Justice will also retrace the route of the original march.

Bernadette McAliskey and Eamonn McCann will be among the speakers to be held at Free Derry Corner.