Glen see off Moneymore to book semi-final spot against Ballinascreen 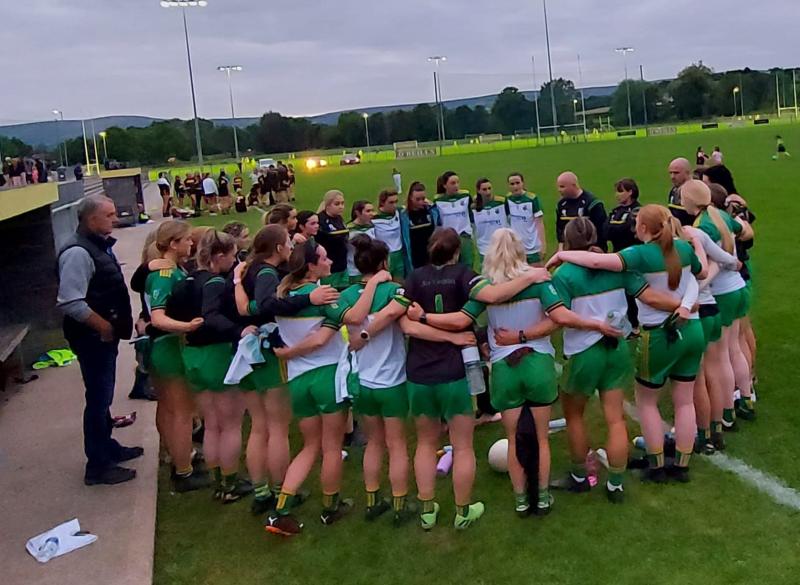 The Glen squad and their management after the win over Moneymore.

Annie O’Lochlainn fired Glen into the semi-finals of the championship after a hard fought victory at Watty Graham Park on Monday evening.

The sharp shooter finished with seven points to her name while her twin sister Mary struck for the only goal of the game. It was a stop-start encounter that never rose to any great heights but in truth Glen, while struggling to break away for long periods, never looked in danger as they led from start to finish.

O’Lochlainn opened the scoring with a free and almost immediately Mary followed with the goal to give the home side a blistering start. However, with Grace Conway anchoring the Moneymore defence they found it difficult to create scoring chances.

Eve Diamond opened the visitors account and on 13 minutes they almost netted when Glen ‘keeper Louise Gunn was turned over out the field and it took great defending from Caoimhe Kirkpatrick and Aimee Glasgow to deny Niamh Hannon. O’Lochlainn and Diamond traded further points before the water break.

A superb ball from Claire McGroggan opened up the Moneymore defence but Lauren O’Loughlin couldn’t make the goal chance count. Diamond landed her third free of the day to reduce the deficit. Bronagh McNicholl with a brace either side of a beauty from Shannyn Doherty left the home side 1-4 to 0-4 ahead at the break.

Diamond with a free cut that advantage but O’Lochlainn with three-in-a row put daylight between the sides by the second water break, with both her sister Mary and cousin Breena O’Loughlin causing Moneymore lots of problems. Moneymore though were not lying down and a super point from the hard working Erin O’Neill cut the deficit back to a five point game. Then came a key moment that could really have saw it game on again when Gunn denied Hannon a goal after the Moneymore girl had jinked her way through with a great run on 55 minutes. That was Moneymore’s opportunity gone and it was fitting that O’Lochlainn had the final say with a converted free to leave six between them at the finish. Next up for Glen in a clash with Ballinascreen in the last four in two weeks time while Moneymore now enter the Shield competition.