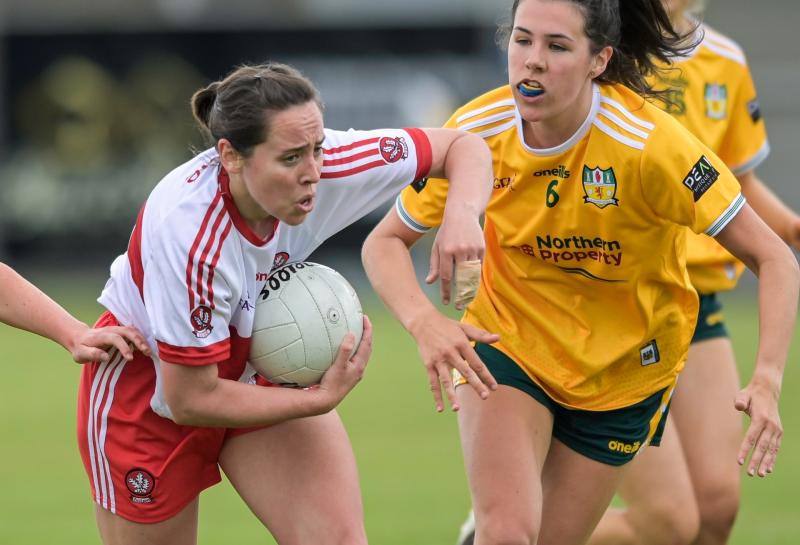 When the dust settles on 2021, Derry Ladies will look back salvaging a year that was going off the rails earlier in the season to coming out on the wrong side of the small margins.

Sunday was another example. Emma Doherty's free looked to have given Derry a win in Mullahoran that would've booked their place in the semi-finals, only for Maire Kealy to level matters and Wicklow swatted the Oakleafers away in extra time.

After a winless league campaign and a defeat to Antrim in the Ulster Final, Odhran McNeilly, his management and squad looked deep inside themselves.

Scratch beneath the surface and there is more to Derry's season.  Playing with a sweeper and a more defensive shape served them well in terms of championship performances, leaving them with two emotions – hope and regret.

Hope, that with the recent minor and U16 wins, a conveyor belt of players with a winning mentality will feed into the squad.

But there are regrets that will linger into the winter. After beating Antrim, they didn't push on. Against Limerick, a game they lost after extra-time, after the Oaks were on the wrong end of an umpiring decision. Then, against Carlow, they also came up short.

The Ladies Association's bizarre format in the group stages of having extra time to produce a winner on the day has to be questioned. In normal circumstances, Derry would've finished a campaign with one win, two draws and their one-point defeat to Carlow.

Going into next season, it's turning the hard luck stories into wins. That's the next step.  It's only progress if there is learning.

Wicklow, with Maire Kealy central to their gameplan all afternoon, went into an early two-point lead before Derry settled into their groove.

Erin Doherty began to carry the ball from defence and Ella-Rose Sainsbury was giving them a great link in their half forward line. Both combined for Ella-Rose to kick Derry's first score.

Derry were on top by the water break, with Erin Doherty popping over at the end of a move she started and also involved Emma Doherty and Anna Frizelle.

Derry turned over the kick-out and went 0-4 to 0-2 ahead with a second Sainsbury score. Nuala Browne kicked over a fifth score for the Ulster side after Aine McAllister picked up the ball from a Gunn kick-out, with Frizelle involved in the move.

Orla McGeogh can be disappointed not to have won a free that would've put Derry three points clear, instead Kealey made it a one-point game before Ciara McGurk blazed wide on the brink of half-time with a goal for the taking.

Derry were ahead (0-5 to 0-4) at the break and doubled their lead with the score of the game. It began with an Aoife McGough interception. The ball was played up the wing through Ella-Rose Sainsbury before she took the return and fed Orla McGeogh for a super score.

A Wicklow goal from Mikeala Shelly rocked Derry, as she nipped in ahead of Louise Gunn to finish Ella Parke's spinning shot that was half-blocked by Nuala Browne, putting Wicklow 1-4 to 0-6 ahead.

Derry didn't stand on ceremony and when Ciara McGurk was fouled at the other end, Emma Doherty confidently converted the penalty.

In the next play Derry nearly had a second goal, only for McGurk's effort to come back off the bar. It was one of those games of inches.

At the second water break, Derry were 1-7 to 1-6 ahead and the third quarter was a tense spell of point for point. Two Doherty frees had the Oakleafers two points ahead with five minutes to go, only for Healey to respond and level the game again.

Two minutes into stoppage time, a foul on Danielle Kivlehan presented Derry with a chance to win the game and Emma Doherty nailed her kick.

There was still a sting in the tail and Wicklow were able to secure possession from their kick-out and three passes later Maire Kealy had the ball over the bar to level matters at 1-10 each, taking the game to extra time.

Disaster struck for Derry when Sinead McGettigan's shot crept into the top corner of the Derry net. With renewed energy, Wicklow added two scores from Kealy to open a five-point lead.

Kealy took her tally to 11 points as Derry struggled to get a score. Nicole Nugent had her close-range free blocked by one of 11 Wicklow players back on the line. From the resultant free, it was blocked again before Ciara McGurk popped over Derry's only score of extra time.

The Oakleafers face Wicklow next Sunday
ADVERTISEMENT - CONTINUE READING BELOW