Brendan Rogers will be playing in Ballybofey insists Derry boss 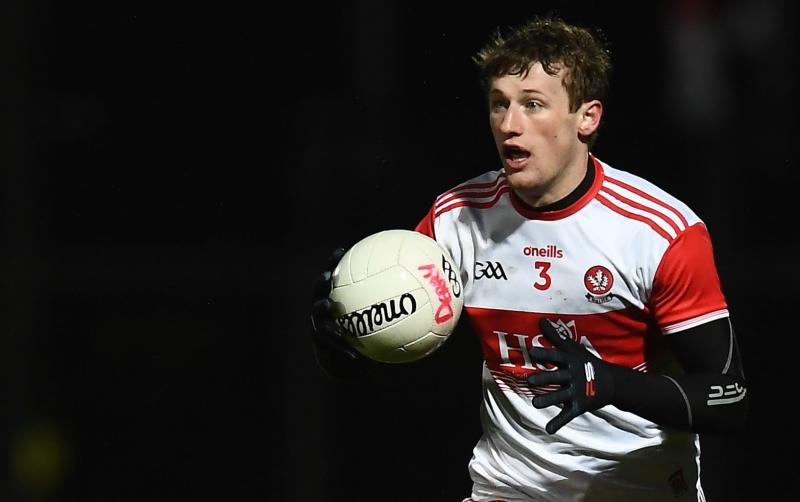 Rory Gallagher's answer is clear cut. There is no grey area. Brendan Rogers will be playing at full-back in Sunday's championship showdown with Donegal.

That's exactly how the Derry manager addressed any uncertainty surrounding the Slaughtneil defender's availability during an interview last week with the County Derry Post.

A hamstring injury, which Gallagher placed in the grade one category forced Rogers off in the second-half half of Derry's victory over Cavan on the last weekend of May and after a scan revealed a small tear

“Brendan is fully fit,” the Derry boss now states. "From the minute he got injured, the management's focus was on getting him back on the pitch for championship action in July. It was all about patience.

“Unless he has a setback, which we don't intend to happen because we are not going to rush him, he'll be 100 percent,” Gallagher said. “It's not about being available for selection...he is playing full back, it is very simple.”

Sunday will mark a full six weeks since he played a competitive game, but Gallagher isn't the 'slightest bit worried' about Rogers' ability to step into the championship cauldron.

“For the likes of Brendan, or any player, if they haven't had a competitive game in five or six weeks...my approach is they are playing football all their life.

“He (Rogers) knows how to play in the full-back line all his life, he is that valuable a player that's a matter of getting him right and that's why we have been very patient. He will be involved in the training exercises and I am not in the slightest bit worried about him.”

Gallagher reports a clean bill of health, but insists Karl McKaigue is out of contention for a starting berth on Sunday despite his full recovery from injury. The defender's only outing in the league was in injury time appearance against Offaly with the game already put to bed.

“The bottom line, he has missed an awful lot of training at a very high level. He just hasn't had the competitive games but he is part of our squad and we'll see if he can push on over the next ten days,” Gallagher outlined last week as they began to finalise their preparations for Sunday.

“Conor McCluskey was back for a first start the last day and we were delighted to get that. Shea Downey has had a couple of setbacks, but he has been training away. We have a fully fit squad and we'd be happy with that.”

The other side of the coin is the injury to Donegal talisman Michael Murphy that leaves his a doubt for Sunday after a recurring hamstring injury in their facile win over Down.

Gallagher, who was present in Páirc Esler, is planning for both scenarios, a Donegal with or without Murphy, but 'expects nothing else' than seeing him listed at number 14.

“Whether he starts or comes on, he'll definitely be available for selection,” admits Gallagher who spent seven years with Donegal at U21 and senior level.

“I have a good idea of Michael's mentality, he doesn't believe in being injured in the championship and he will be doing everything in his power to play.”

Rogers' injury not as bad as first feared