Rogers' injury not as bad as first feared 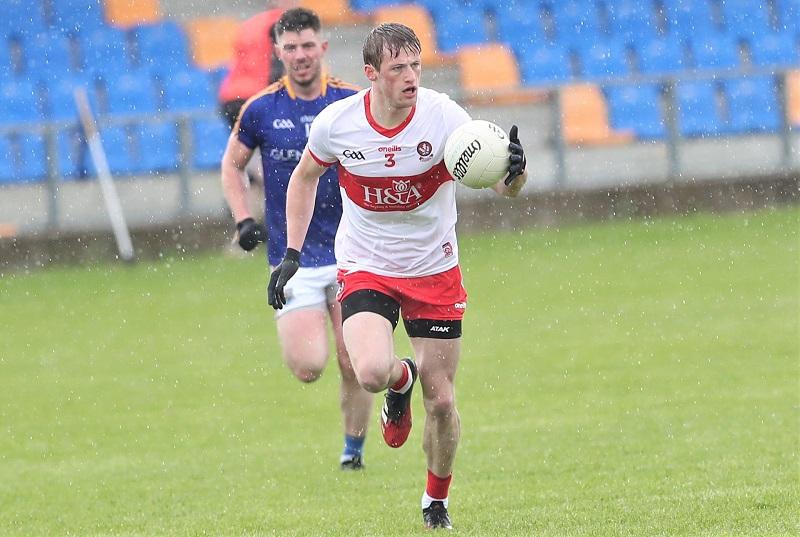 Brendan Rogers will have a scan on his hamstring injury on Tuesday. (Pic: Syl Healy)

Rory Gallagher said it will be a race against time for Brendan Rogers to be ready for Derry's promotion semi-final.
With Derry not opting for a coin toss to decide on a venue, the CCCC made the decision and the Oakleafers will play Limerick in Carrick-on-Shannon (4.00) on Saturday week.
Rogers came off during Saturday's win over Cavan with a hamstring injury. The Slaughtneil defender was assessed by Derry medical personnel over the weekend, with a synopsis that it's not as bad as first feared.
“It will be a race against time to be ready for the semi-final final,” Gallagher told the County Derry Post yesterday.
Rogers will undergo a scan today (Tuesday) to assess the injury and the rehabilitation process going forward.
“He was quite optimistic,” Gallagher added. “We'd love to have him. At this point I am counting him out and if we have it back it will be a bonus.
“The symptoms he was displaying yesterday (Sunday) would suggest it is not too bad. If he is ready it will be brilliant and if he's not...he is not.
“He is in a good frame of mind and no doubt he will rehab it to the letter of the law.”
Karl McKaigue got another club game under his belt yesterday as Slaughtneil edged out Claudy in the first league game of the season.
Danny Tallon, who hasn't featured for Derry this season, played the second half of Glen's win over Ballinascreen.