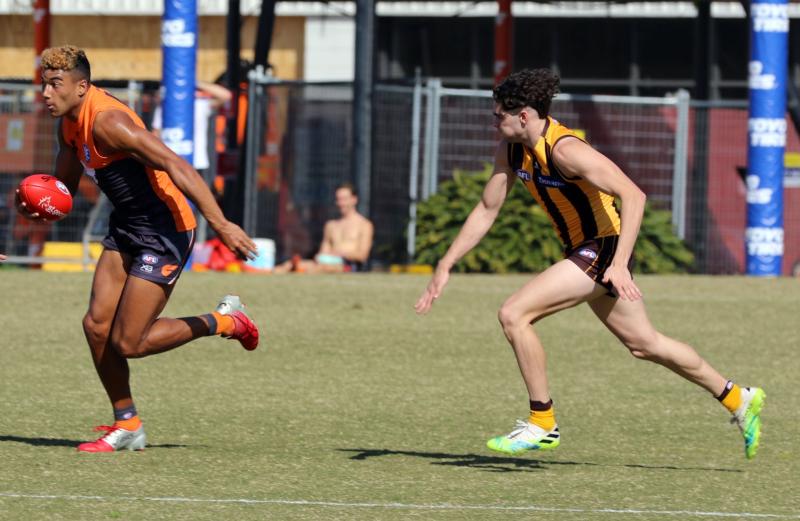 Callum Brown could be in line for his AFL debut. (Pic: GWS Giants)

Former Derry underage GAA star Callum Brown could be in line for a first outing in the AFL after he was listed as an emergecy sub for GWS Giants' game with Brisbane Lions at the Gabba stadium on Saturday.

He will become the club’s fifth debutant of the season, following in the footsteps of Mayo's Cora Staunton who became the first Irishwoman in the AFLW, playing for the GIANTS across the past four seasons.

Scouted by the club in 2017, he signed a two-year deal with the club and was later offered a contract extensions for another season.

In 2018 a GIANTS contingent travelled to Ireland to speak with a 17-year-old up-and-coming Gaelic Football star named Callum Brown.

When 2020 season was cut short by Covid, he returned to Ireland and when he returned it was hard to find consistency in practice matches sometimes only played with 12-a-side.

Another full pre-season has seen Brown enter his third season full of confidence and in recent weeks he’s been playing as a tall defender despite being listed as 188cm and 92kg.

The Limavady man has broken several records within the squad.

“I'd hate to play on him, he has great leg speed and his strength in the contest and in the air is great," his VFL coach Luke Kelly commented on the Giants' website.

Brown has been listed in the emergencies for Saturday’s match and will be named the 23rd man prior to the match.

Should an injury occur, Brown will officially make his AFL debut although being the medi-sub will already give Brown a game to his name.

He’ll become the second Irishman to play for the AFL side, behind Cork's Setanta O'hAilpin.

ALSO READ - Feature interview with Callum before the start of the 2021 season.  CLICK HERE...