The GREAT and good of inspirational businesses through Covid-19 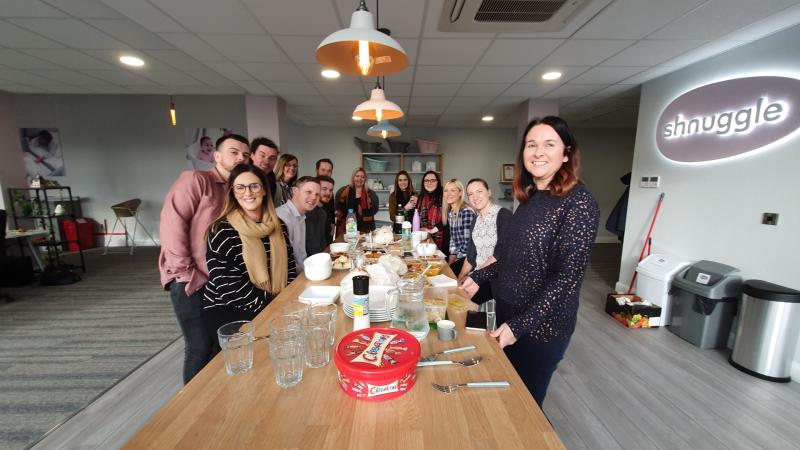 The GREAT and good of inspirational businesses through Covid-19

The UK Government has launched a campaign to shine a light on businesses and employees across the country who have responded to the impact of the Covid-19 pandemic in remarkable ways and are now going back to business. The GREAT Inspirations campaign will recognise companies that have gone above and beyond to continue to operate for their employees, serve their customers and contribute to their local communities. Here are some examples of the many thousands of companies that have proved to be an inspiration.

Rooms and pamper packages for NHS workers away from their families, prepping more than 600 meals a week for vulnerable people in the community and projecting light shows every week for Clap for Carers are just some of the things one hotel team has done during the coronavirus outbreak.

The team at the Queens Hotel in Southsea have been working hard since lockdown began in March to support everyone in the community across Portsmouth.

Duty manager Megan Lockyer has been working with the small team who have welcomed more than 30 NHS workers to the hotel, which during the Second World War served as a hospital for recovering servicemen, for a place to rest away from their jobs. 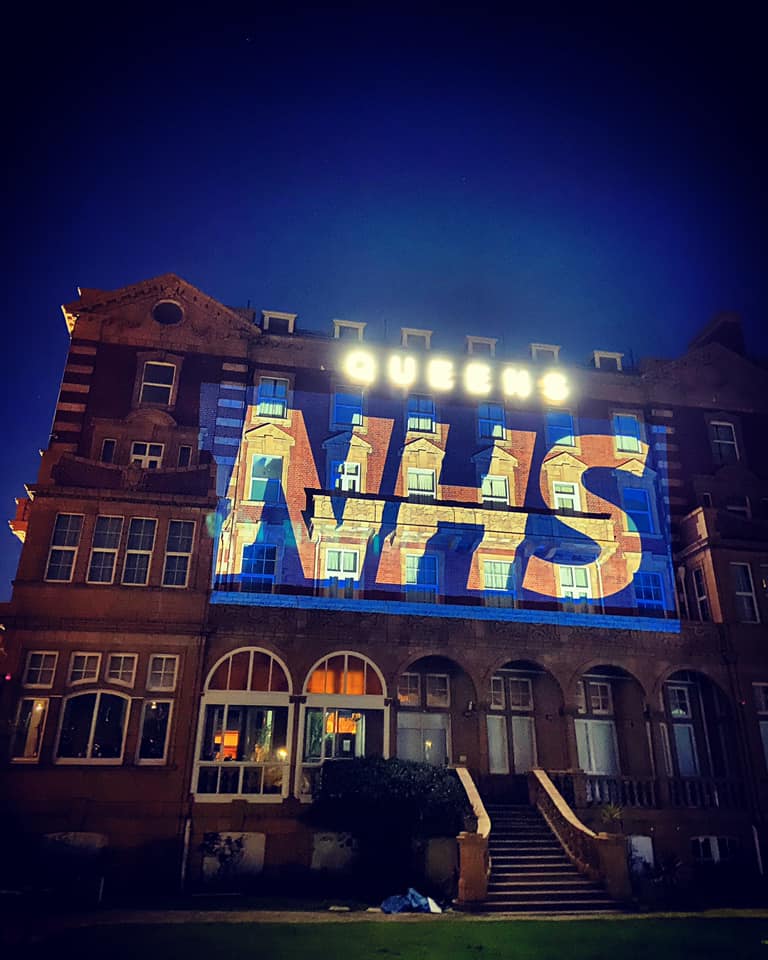 THERE FOR YOU: Queen’s Hotel lit up for NHS and (below) preparing food in the kitchen

Megan put a post on the Portsmouth Coronavirus Support Group on Facebook asking members to support her idea and it has since taken off with donations pouring in from individuals and businesses.

She said: “I watched the NHS workers come back to the hotel after a challenging day and I really wanted to let them know how much we appreciate what they are doing.

“I came up with the idea of making hampers for the NHS workers who are currently with us at the hotel.

“I shared my idea with the Facebook group and it was amazing how the community responded.

“The NHS staff had told us how sore their hands were due to constant washing and we were able to include aloe vera hand cream along with items such as face masks, relaxing bath gels, slippers and Easter eggs.”

Staff also worked with Medusa Hairdressing in Southsea to create more hampers which were distributed to key workers in local nursing homes.

The hotel’s managing director Farid Yeganeh said: “I am delighted with the small team we have working at the hotel who have ensured it is clean and safe for our NHS guests.” 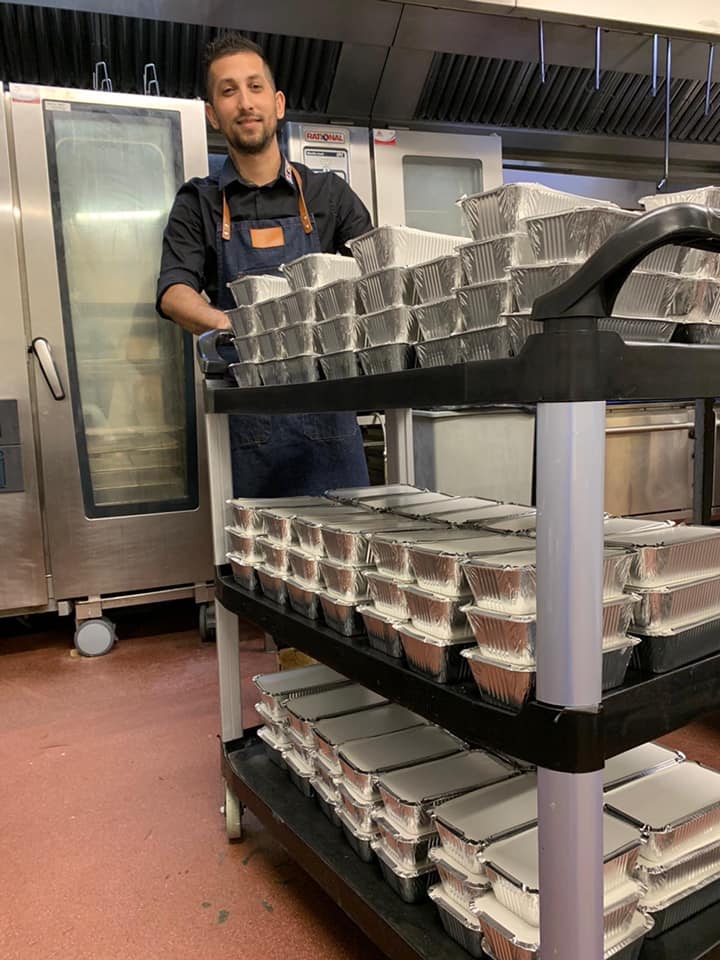 More than 7,200 meals have been sent out in lockdown to vulnerable people around the city thanks to a collaboration between the hotel, a collective of voluntary organisations called Portsmouth Hive, Portsmouth City Council, NHS Portsmouth CCG, the charity arm of Portsmouth Football Club called Pompey in the Community, as well as Anghel Niko Nedelcu, head chef from Portsmouth’s Brasserie Blanc and Royal Beach Hotel head chef Paul Playford. The initiative received two £3,000 anonymous donations, as well as food donations from local businesses including butchers Buckwells. Farid said: “We got an email from the council at the start of lockdown about whether any businesses had any stock that was going out of date. It just snowballed from there really and we teamed up with the Hive to get meals distributed and it means so much that we could help our community.”

Each week for Clap For Carers, projections showing support for the NHS were displayed on the Edwardian era hotel as part of the team’s commitment to supporting local health workers. Farid added: “I have always been aware that we have a really special team working at the hotel and this just underlines it. I look forward to being able to welcome back the whole Queens Hotel team once the lockdown is over.”

When coronavirus started appearing in Inverness, care home manager Victoria Connolly was determined no one who worked or lived there would fall ill.

So she asked the staff of the Isobel Fraser home in Inverness if they’d be prepared to live onsite and was thrilled when 14 said they would.

But then came the problem of where to put them.

The 38-year-old said: “There are a couple of rooms upstairs I could fit six people into. But then I thought, ‘Where am I going to put everyone else?’”

“I have a friend with a campervan so I phoned her and asked if we could use it. She agreed but I needed more so she suggested I hire one.”

Victoria got in touch with Highland Auto Campers whose owner Mark Jarratt, 44, immediately agreed to hire her three vehicles for cost.

While they’d normally charge £130 a night for their practically-new fleet, the care home got them for just £250 each a week.

Mark says: “We’ve only been going two years but earlier this year, things were going well – March was picking up and April and May were fully booked.

“But we only get an eight-month window to make our money because of the tourist season so lockdown came at the worst time for us, the start of our season and was a complete disaster. 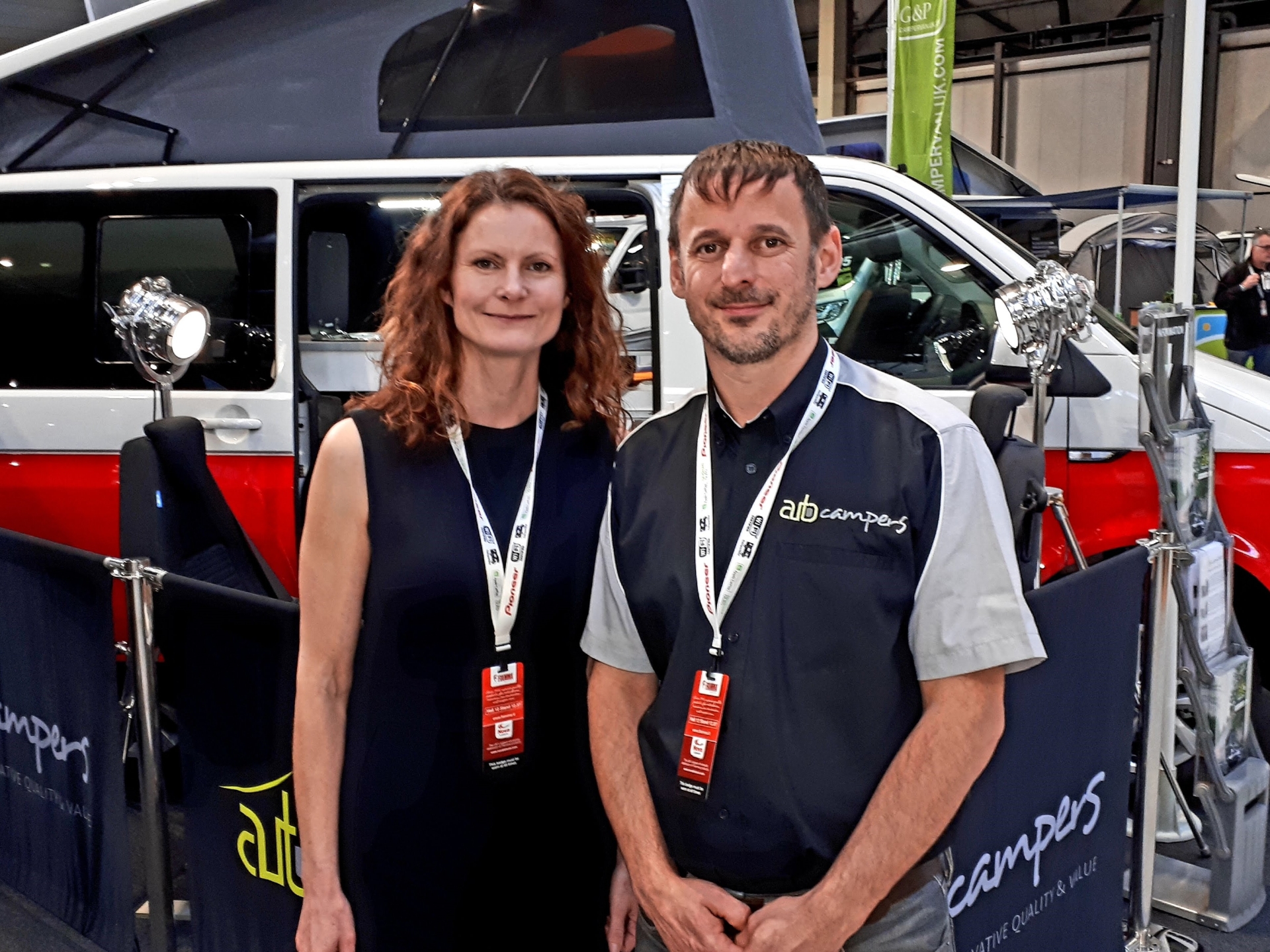 “Then around April 14, we got a call from the Isobel Fraser home. Stories were, by then, beginning to emerge that some care homes had been really badly hit by coronavirus.

“They said that while the home was free of coronavirus, they knew they needed to take steps to keep both staff and residents virus free and by providing accommodation for their staff on site. They wanted to rent three of our vans to do this.

“We were surprised to get the phone call – there are a lot of similar companies in the area – but quite pleased and we immediately agreed to assist in any way that we could. We just wanted to help.

“It was also a win-win situation for us. The campervans hadn’t been used for a few weeks, they were just sitting quarantined and this was income – not a great deal of income but better than nothing.

“Even though they hadn’t been used for weeks, and one was so new it had never been used, we gave them a thorough clean before driving them over and setting them up.

“The staff and some of the residents were quite excited when we arrived and were looking out of the windows.”

Six care home staff slept in the vans for between three and five weeks. Manager Victoria said: “They really enjoyed it – they were warm and comfortable. Most have said they’d take them out on holiday!”

The care home, which has 27 residents, hasn’t had a single case of coronavirus. Mark said: “We were really proud to have been able to help. It’s good to do something for the community.”

Sinead and Adam Murphy were building the company into a leading name among parents with products such as an air bedside crib, airflow mattress, rocking stand, toddler baths, bath stands and many other creations.

But the growth was interrupted when Covid-19 arrived in the UK, and the country went into lockdown.

Although UK sales remained strong, imports were hit and Shnuggle’s owners turned their attention to designing and creating a face covering that would help save lives.

Adam and Sinead quickly realised that they could help make a difference in the national effort to provide Personal Protective Equipment items. After taking measures needed to sustain the business, including taking advantage of UK Government furlough and business loan schemes, they set about creating and growing not-for-profit business Hero Shield.

Adam said: “We had seen a few initiatives that had popped up all around the world.

“A lot were printing 3D face shields so we kind of sat down with our head of design who was on furlough and said, ‘can we come up with a design here that we could start producing at rock bottom price and we’d prefer it to be a reusable one rather than a disposable one?’.

“We came up with designs over the course of a weekend, by Monday we had done 20 different designs and 3D printed them on our prototyping printer and we’d put out a call on LinkedIn to local companies who wanted to get involved and within a very short space of time we had about 20 different businesses all saying, ‘Yep, we can do that bit and we’ll do it free of charge or we’ll do it at cost’. 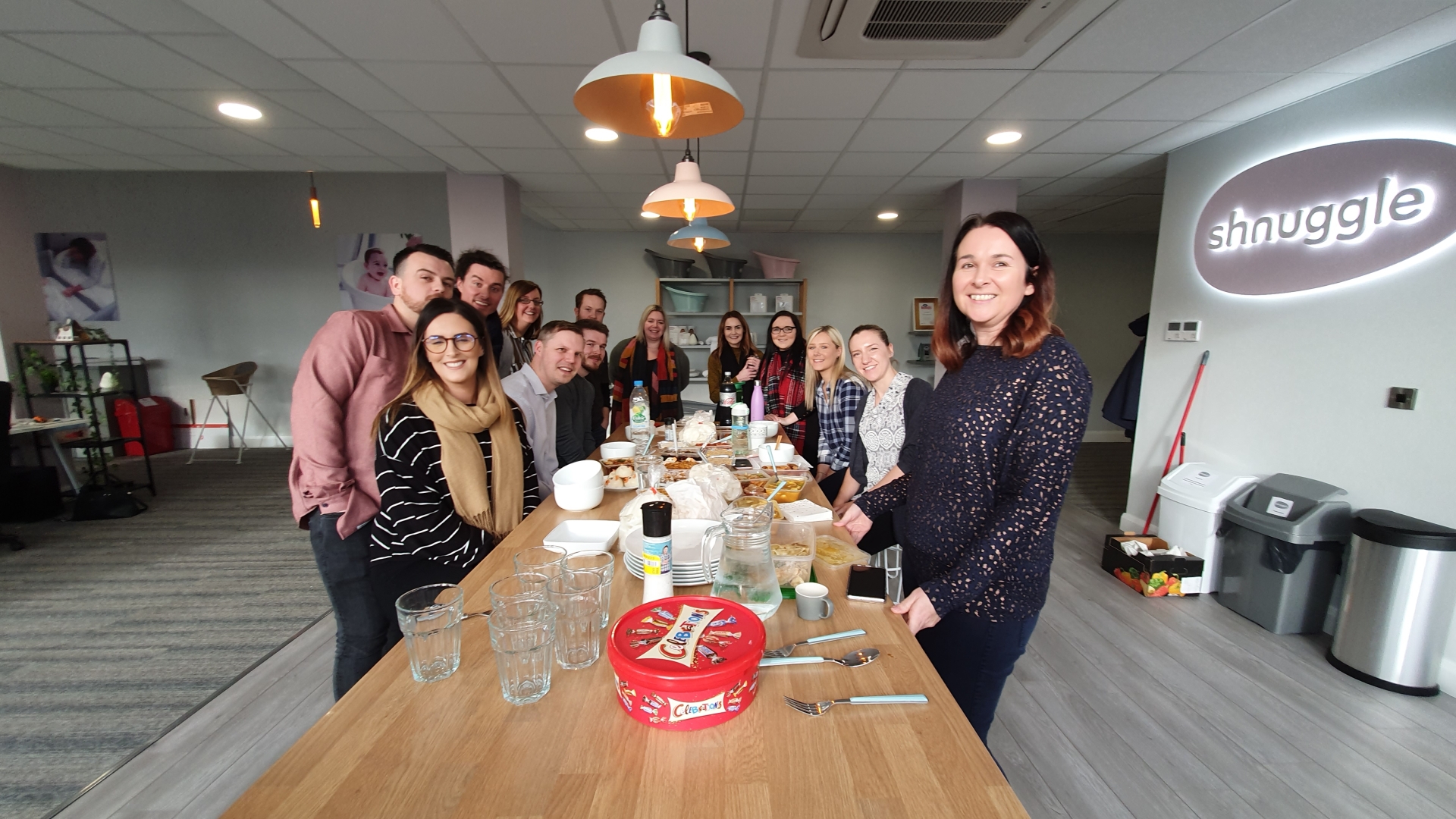 “We said that we weren’t doing it to make money. We were trying to help the NHS and other care workers so we founded another company which was Hero Shield Ltd and we set it up as not for profit so nobody could take any money out of it. Alongside that we did a crowdfunder to cover the costs so we raised £35,000 in the end.

“We managed to produce and ship out about 100,000 face shields in about six weeks.”

Adam and Sinead are working to secure charitable status for Hero Shield Ltd, which is still running on a non-profit basis, and is now focussing more on charities and care services that don’t have the funds for whatever PPE they might need to get back up and running.

Sinead said: “The businesses that were actually producing the face shields, we passed the orders to them and they have turned it into more of a commercial venture because we got a massive order from the NHS.

“It was worth shy of £1m and we needed to focus back on Shnuggles, so we passed it over to them and they pay a royalty into the Hero Shield charity for every one that they make.”

So having helped the NHS in Northern Ireland, Adam and Sinead are now focused again on their core business – creating and marketing clever products for babies and children. 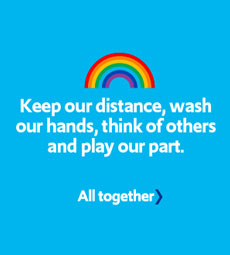