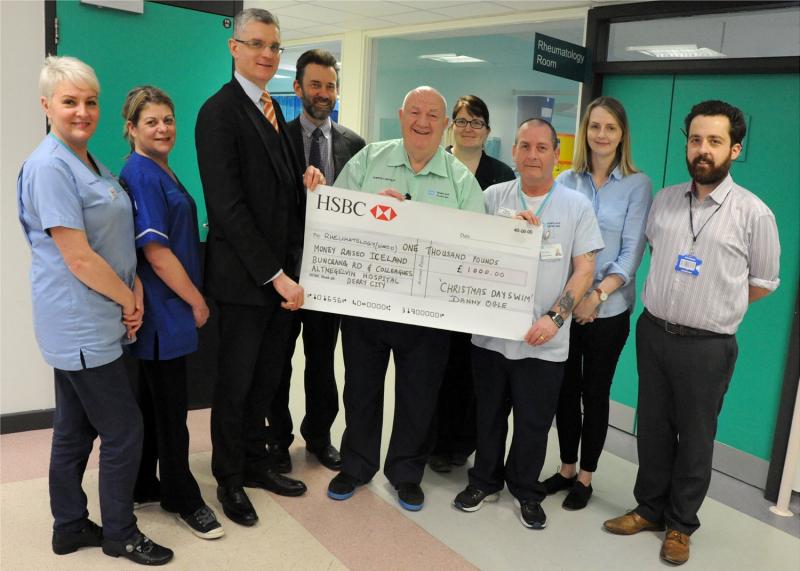 The son of Derry's best known charity fundraiser has thanked the staff at Altnagelvin Hospital for helping his father survive the coronavirus.

Hospital porter Danny Ogle is currently recovering in the hospital's COVID-19 Ward after being released from intensive care last week.

In a touching tribute, his NHS co-workers lined the corridors and clapped to celebrate the first step in his recovery.

Mr Ogle is known to many throughout the city for his tireless charity fundraising work.

Speaking from his home in London, Mr Ogle's son, Daniel Patrick Ogle, said he and his five siblings had been concerned their father would contract the virus.

"My father is 68-years-old and when the coronavirus broke out I spoke to him and said this was too much and he needed to step back.

"But he didn't want to hear it.

"He was determined to go to work and do his job and he wouldn't be told.

"He just said 'they need me and I need to go to work."

"He started to have a high temperature that he couldn't shake and loss of appetite," explained Daniel Patrick.

"He was isolating from my mother Margaret in the house."

By the Friday, Mr Ogle was experiencing shortness of breath and was taken to Altnagelvin Hospital by ambulance, while Margaret was forced to remain at home.

"It was very scary for everyone," said Daniel Patrick.

"No one could visit my mother so she was alone in the house.

"She was able to phone the hospital for updates, but that was all she could do.

"None of us could do anything.

"We couldn't go and hold my mammy which would be the normal thing to do.

"It was incredibly frustrating."

After he was admitted to the COVID-19 Ward, Mr Ogle's condition continued to deteriorate and he was taken into the Intensive Care Unit to be put on oxygen.

"This was kind of scary for us," said Daniel Patrick.

"We started to get very worried.

"One of the worst parts was knowing that if he died he wouldn't get a proper wake or funeral.

"He has probably been to almost every wake in Derry and he lifts people's spirits and has a bit of craic.

"I'm just very, very, very sorry that there are some people out there that this has happened to."

Daniel Patrick said the NHS staff are taking on the role of family at present.

"The hospital staff are the ones who are with people when they are sick and dying.

"They are the ones who are with them at the very end, where normally a family would step in.

"It must be so difficult.

"It is these real, ordinary men and women who are getting up and going out to their work every day and putting themselves in danger.

"From the doctors and nurses to caterers and cleaning staff they are all amazing. I can't fault the NHS in any way."

Daniel Patrick said his father's condition improved in ICU and last Tuesday his co-workers lined the corridors to clap for him as he was moved back to the COVID-19 Ward.

"We knew he was on the mend because he was able to take some chicken soup and he burnt his mouth on it, he was that hungry," said Daniel Patrick.

"My mother was allowed to do a video-call with him and all they did was cry."

Margaret is now looking forward to getting him home and nursing him back to full health.

"We just want to say thank you to all the staff for the amazing work they are doing," said Daniel Patrick.

"Everybody is doing their work and trying their best."

Daniel Patrick is a film-maker and has cast his father in three of his movies, The Best Years, Moussaka & Chips and Requiem for a Fighter, which were filmed in Derry and are available to watch on Amazon Prime.