Gallagher makes four changes for the visit of Donegal

There is a return to the squad for Gareth McKinless 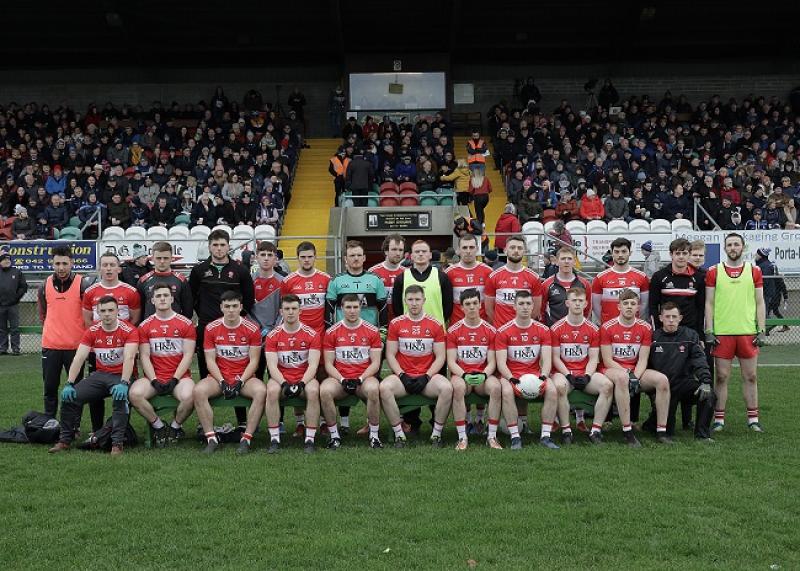 The Derry squad pictured before the defeat to Monaghan in Inniskeen. (Pic: Fintan McTiernan)

Derry manager Rory Gallagher has made four changes to Derry's starting team and has named Gareth McKinless on the panel for tonight's clash with Donegal.

Goalkeeper Odhrán Lynch takes over from Thomas Mallon between the posts for a just a second senior appearance.

Conor Doherty and Carlus McWilliams missed the opener (holidays) but are set to start tonight.

The other newcomer is Niall Toner who comes into the attack at the expense of Oisin McWilliams.

Gareth McKinless, who has started one game (McKenna Cup v Tyrone 2019) in the last three seasons, makes a return and is listed on the bench.  The Ballinderry man impressed in their championship mauling of Dungiven before being forced off in their quarter-final against Slaugntneil.

The Oakleafers' boss hasn't considered any of the Slaughtneil or Coleraine hurlers following their All-Ireland hurling exertions last weekend.

Derry have a score difference of -6 after their defeat in Inniskeen and need a 12 point win to secure top spot and a place in the semi-finals this weekend.

Tyrone and Armagh, who face each other tonight, are the favourites to finish as the best placed runner-up.

“I haven't looked at it. We are focused on trying to win the game and we'll see where that will take us,” Gallagher told the County Derry Post of his take on the permutations.

Donegal boss Declan Bonner has yet to name is side but hit out at the fall-out this weekend's Sigerson fixtures.

Bonner could be without up to 12 players due to university action, should his side qualify from the group tonight.

“We might not even have a team to play (this weekend), but that is just the way it is. It is pure madness how the fixtures are coming," Bonner told the Donegal Democrat.

“Something has to be done, something has to change because there is no way that this possibly can continue.  You are looking at a lot of those lads playing three games in six or seven days.”

Derry will open their NFL Division 3 campaign at home to Leitrim on Saturday, January 25 before facing trips to both Cork and Down.