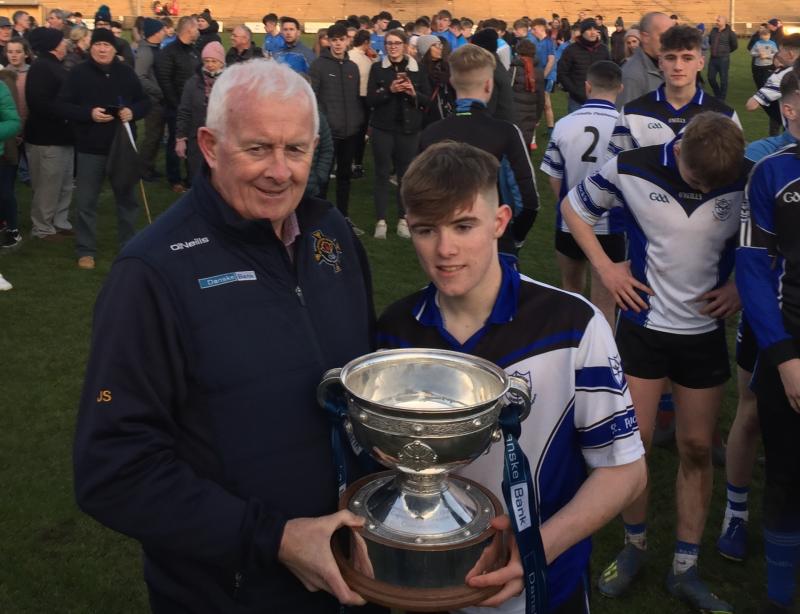 RANNAFAST CUP FINAL
U16.5 'A' FOOTBALL

When Cathal Chambers was fouled, he was faced with a free from a tight angle but the Glen man held his nerve to nail the pressure kick in front of an attendance of around 2,000.

It was a cruel blow on a Magherafelt side that controlled the game for much of the hour.

For St Mary's recently appointed GAA Development Officer Johnny McGurk, it was a bittersweet afternoon.  While the former Maghera pupil co-managed Magherafelt, his son Patrick came out on the winning side where handled plenty of possession in his sweeper role.

Both teams qualified for the final on the back of pulsating semi-final displays but this was a game of chess.

The sides were level (0-3 each) at the break, but Maghera would've been the happier side given six Magherafelt wides and Conall Heron's goal chance coming back off the post.

St Mary's continued their dominance and thanks to Diarmuid Mulholland's 34th minute goal, they went into a three point lead.

Scores were at a premium but Maghera almost replied with a goal when Luke Diamond met Peter McCullagh's high cross-field ball but goalkeeper Tiarnán McOscar tipped his fisted effort over the bar.

Two frees from the unflappable McDermott leveled matters after 45 minutes but Magherafelt were soon ahead with a booming score from Niall O'Donnell.

It would prove to be the last score for 'The Convent'.  Callum Downey, likes his cousin Conor did in the Corn na nÓg final last week, brought the sides level in the closing stages.

Maghera owned the ball but survived a late scare when Ryan McEldowney's free dropped into a packed square.  There were vocal appeals for 'touching on the ground' but the well-placed Paul Faloon waved play on and Raymond Dillon won a free out.

With extra-time looking highly likely, Maghera continued with their patient brand of football until Cathal Chambers won a the late free and McDermott's winner sealed the title.

After the game, Ulster Schools' Chairman Jimmy Smyth presented the cup to winning captain Adam McGonigle, 31 years after his father Barry and uncle Marty were on Maghera's victorious Rannafast winning side.

For analysis, interviews and photos, grab a copy of Tuesday's County Derry Post.