Councillor says claim of 40,000 NW students could damage ‘credibility and reputation’ of the local authority 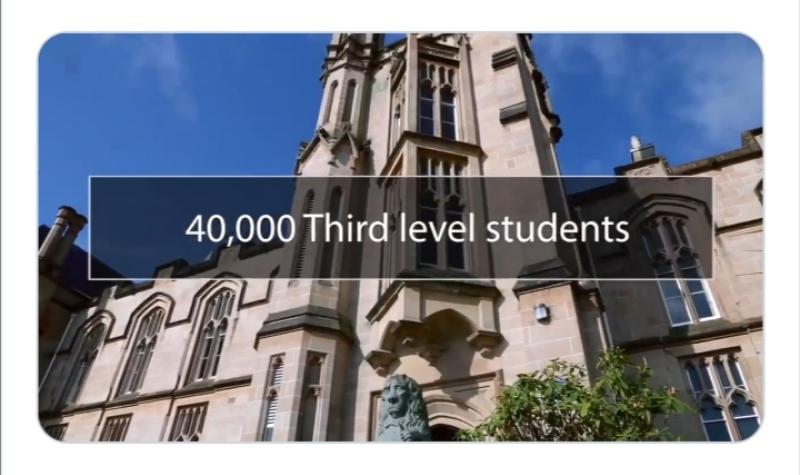 A still from the video promoted by Council

A local councillor has warned that Derry City and Strabane District Council risks “massive reputational damage” over the distribution of misinformation.
The comments were made by Independent Councillor Gary Donnelly after information shared by the Council regarding third-level student numbers in the North West was branded “inaccurate” by FactCheckNI.
A promotional video was produced for a project called Ireland Northwest which is a collaboration between Donegal County Council and Derry City & Strabane District Council aimed at attracting trade and investment to the region.
It claims there are “40,000 third level students” with “7,000 graduates annually ready for employment”.
A delegation from both Councils visited Philadelphia and Boston two weeks ago where they showcased what the NW has to offer, including third-level students.
FactCheckNI, an independent fact checking organisation, rebutted Council’s claims, producing evidence that shows there are 9,370 third-level students in the North West, with approximately 3,300 graduates a year in the region.
It is understood that Ireland Northwest massaged its figures by including adjacent areas in the shape of Coleraine and Omagh, which sit outside the geography covered by the partnership.
Nonetheless, adding the latest available student numbers for Coleraine, 4,495, would take the overall total to 13,865, which still falls some way short of the touted 40,000 students.
Independent councillor, and Chair of Council’s Assurance, Audit and Risk Committee Gary Donnelly emailed Derry City & Strabane District Council CEO John Kelpie to ask how these figures were calculated. He requested that if figures are incorrect then Council rectify them as a “matter of urgency”.
Cllr Donnelly said: “If it’s a mistake it needs rectified. But if people are bumping figures up in order to give a better impression to overseas investors it isn’t the right thing to be doing.
“What they’d be better doing is trying to increase the number of student places than distributing misinformation. My concern is that by tying Coleraine and Omagh into the North West it doesn’t address the reality of inadequate numbers.
“The danger here is that this has been shown to be inaccurate and that could lead to a warning if FactCheckNI flag it up. That could damage the credibility and reputation of the Council because a warning could be given once you click on to any Council post saying the information supplied may not be true.
“That could result in massive reputational damage for the Council.”
Cllr Donnelly is referring to Facebook’s fact-checking operation which launched earlier this year in the UK. FactCheckNI is part of Facebook’s third party fact-checking programme.
The social media giant has however faced harsh criticism over its decision to exempt politicians from fact-checking and has been urged, along with Google, to ban political ads ahead of the UK election.
Council is subject to fact-checking, meaning posts, links and videos that have been flagged as false will be marked as such to users, and people will be warned if a post they are about to share has been found to be false.
Facebook’s newsfeed algorithm will deprioritise false content, ensuring that it reaches fewer people than it would otherwise, and for those deemed to be repeat offenders, all their content is demoted.
In a statement to the Derry News, a council spokesperson confirmed that it had received queries relating to the figures and is currently liaising with colleagues in Donegal and with the colleges in the region to review the figures.
The spokesperson explained that the context of the brochure and video is "mainly to promote the region to overseas investors and therefore aims to maximise the opportunity that is available from a skills perspective in NW region of Ireland."

On 12 November 2019, Derry City & Strabane Council published the video on its social media platforms, where it claimed “Ireland Northwest” contains “40,000 third level students” with “7,000 graduates annually ready for employment”.
A breakdown of numbers by FactCheckNI, which made use of an FOI response obtained by the Derry News regarding Magee figures, shows that based on the latest data available for the 2018/19 academic year, there were 4,313 students studying at the Magee campus - 3,429 were full-time and 884 were part-time.
It determined that if most degrees take three years to achieve there would be 1,500 graduates from the Magee campus each year.
NWRC provided a current estimate of 1,057 students studying in third level/higher education - 539 are full-time and 518 are part-time.
In 2017-18, third-level students comprised 10% of NWRC’s overall student enrolments. NWRC had 586 students graduate from higher education in 2018-19.
Letterkenny Institute of Technology confirmed that they have just over 4,000 students in total, and that all of these students are completing higher education qualifications, Levels 6-10. They also advised that they had 1,200 graduates in 2018.
That makes a combined total of 9,370 third-level students for all three institutions in the North West region, with approximately 3,300 graduates a year.
If, as suspected, Ireland Northwest included Ulster University Coleraine, based on FOI figures gathered by this paper it would push the total to 13,865.