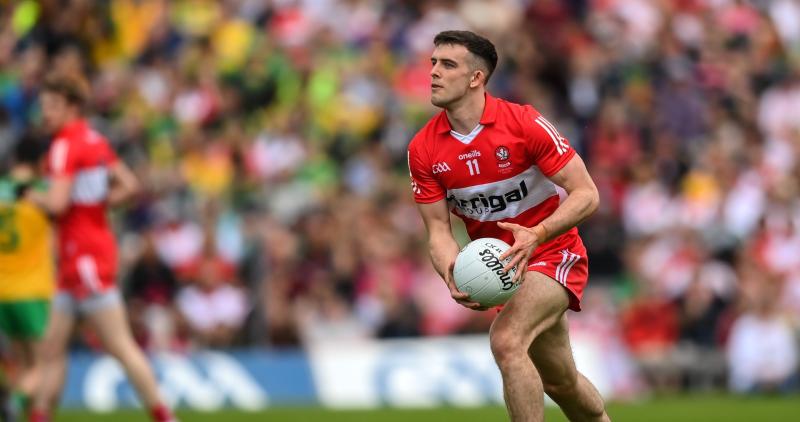 The Derry senior footballers will have to beat Clare and the winners of Galway and Armagh to reach their first All-Ireland football final since 1993.

The All-Ireland quarter and semi-final draws were made on RTE on Monday morning with Des Cahill joined by GAA President Larry McCarthy and Feargal McGill, Director of Club, Player and Games Administration.

Derry were drawn to face Clare in the quarter-finals. In the other ties, Mayo will face Kerry, Cork play Dublin and Armagh meet Galway. Derry were drawn on the Galway/Armagh side of the draw with the winners of those ties playing off in the All-Ireland semi-final.

That means the winners of Kerry v Mayo and Dublin v Cork will contest the second semi-final.

There will be a fresh element to this year's All-Ireland Football Final.
One of these four counties will definitely be in the final, given the semi-final draw...#Galway or #Armagh v #Derry or #Clare

As Ulster champions, Derry have been installed as long odds-on favourites to beat this year's surprise package Clare who overcame Roscommon in the last round of the qualifiers at Croke Park last Saturday evening. Derry won their first Ulster title since 1998 last month as they overcame Donegal in an arm wrestle in Clones.

Clare have been on a retrieval mission after losing to Limerick in a penalty shootout in the Munster quarter-final. They bounced back with a 1-11 to 1-9 winner over beaten Leinster semi-finalists Meath in the first round of the qualifiers which set up their tie with Roscommon.

Derry on the other hand have navigated a difficult course through the hugely competitive Ulster championship to this point. They beat 2021 All-Ireland champions Tyrone at the quarter-final stage with a comprehensive 1-18 to 0-10 victory. They followed up with a 3-12 to 0-17 win over Monaghan before beating Donegal by two points in the decider.

Reacting to the draw on RTE, former Armagh footballer and pundit Oisin McConville said: "Dublin and Derry will be quite happy but Derry will have to be on their guard. It's an interesting draw."

The danger for Derry is underestimating a Clare side who have languished in the early stages of the qualifiers in recent years. They last appeared in an All-Ireland football final in 1917. Yet buoyed by a big win in HQ this term, they will be a serious threat to the Derry juggernaut.

The All-Ireland football quarter-finals will be played over the weekend of June 25/26.