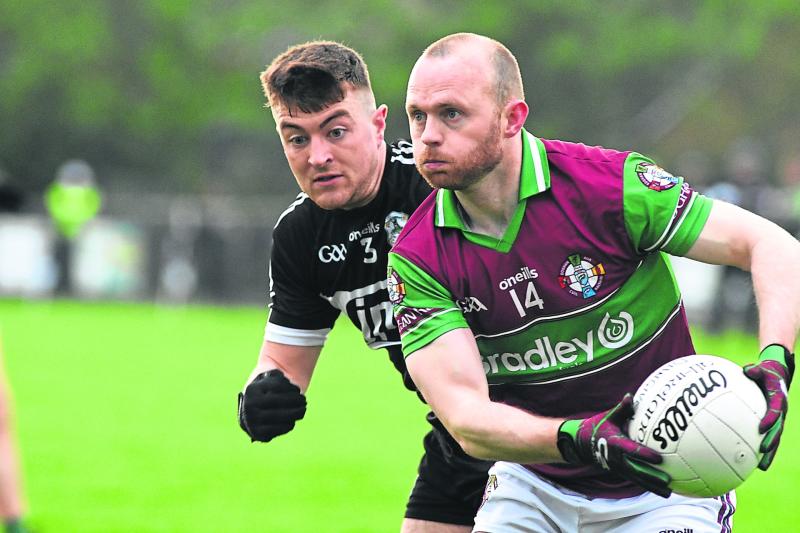 Ciaran McGoldrick scored the winner for Eoghan Rua against Watty Grahams at the weekend.

DERRY SFL ROUND UP

In a very entertaining game a late Ciaran McGoldrick point earned Eoghan Rua the narrowest of victories on a 3-11 to 2-13 scoreline at Glen on Saturday evening. The home side were on top in the opening quarter, with a 10th minute goal helping them to a 1-4 to 0-2 lead.

Danny Tallon had opened the scoring for the home side and soon Alex Doherty continued his goal scoring streak with another well taken effort.

Glen had a pointed effort drop shot and Coleraine themselves found the net after a quick counter attack with a 20th minute goal, a Lorcan McMullen burst forward and cross found Ciaran McGoldrick at the far post to palm to the net.

The sides then traded points in a flurry of scores in the closing minutes of the half points from Conleth McGuckian, Cahair McCabe, Jack Doherty, Paul Gunning, Tiarnan Flanagan and Alex Doherty for Glen, Dara Mooney (2) and Aidan McGonigle for Coleraine, seeing Glen going in three ahead 1-8 to 1-5 at the break.

The opening five minutes of the second half proved crucial as Eoghan Rua hit three points in quick succession, Dara Mooney (2) and Pearse McGonigle on target.

Then Dara Mooney punished a misplaced short kick out to strike low to the net to put Coleraine ahead, 2-8 to 1-8, for the first time in the game.

It really was end to end stuff from then to the finish with a series of fine scores from both sides who concentrated on playing football throughout.

The sides traded points in the third quarter with Coleraine still leading 2-10 to 1-11.

A short barren spell of scoring ended in the 53rd minute when Dara Mooney placed Lorcan McMullen for a neat goal to open a gap of five points.

Glen roared back though, Conleth McGuckian finished a fine move to the net for Glen to level the game after scoring two points from play.

At that stage it seemed Gen had all the momentum but in a break Ciaran McGoldrick found space to advance and punch over what turned out to be the winning point for Coleraine.

The very definition of a game of two halves this fixture saw Lavey playing with the breeze in the first half and registering an impressive 1-10 to 0-04 lead.

Swatragh scored four in the opening half with James and Francis Kearney converting frees and Fintan O'Kane and Niall Coyle adding to the tally.

Swatragh opened the floodgates in the second half, including a goal coming from James Kearney and a range of scores from play from brother Francis Kearney, two from Niall McAtamney and Peadar Coyle scoring the winner to leave it a one point victory to the Swatragh men.

Claudy's woes in the league continued this weekend as they faced a strong O'Donovan Rossa's side at home.

The Claudy men are sitting bottom of the league after seven games without a win, whilst the Magherafelt side are sitting mid-league with three wins from six.

Five of Claudy's six scores came from frees, all converted by Oran Armstrong. The other point came from play for midfielder Shane McGahon.

Goals from Daire McKeever and Cahir Higgins saw the home side secure the win on Saturday evening at O'Cathan Park. McKeever opened the scoring for the home side with the first score of the half from play, and took their last score of the opening half when he slotted the ball past Ben McKinless.

Dungiven looked comfortable at 7-3 ahead when Charlie Crozier took a goal to bring the game back to one point. Dungiven tagged on another point from play before Ryan Bell was sent from the field on a straight red five minutes before the break.

The Shamrocks will be heartened by their second half performance, they battled well despite their deficit in numbers.

Cahair Higgins showed scored a fine goal early in the second half when he held off his marker to claim a high ball in under one arm, spun and rattled the net all in one move.

Ballinderry's netminder McKinless played large parts of the game as a roving outfield player. Dungiven's scores came from eight different players and so they are proving a much improved prospect under their new management regime, captain Kevin Johnston probably the best in black and white over the hour.

Slaughtneil got straight back to winning ways this weekend after falling to Dungiven in the last round. Welcoming All Ireland intermediate champions Steelstown to the Robert Emmets ground the home side looked to Brian Cassidy as leading scorer.

Cahir McMonagle was the visitors top scorer with a personal tally of 1-2 of his side's 1-5.

Kilrea proved too strong for the home side on Sunday afternoon as they notched up an impressive 2-15 away from home. Larry Kielt's accuracy from placed balls was matched by his ability to take a score from play – he scored three of each.

It was a game of brotherly love for the Kilrea side with the McAleese brothers scoring 1-5 between them, and the Kielt men scoring 0-8.

Tiernan Moore matched Larry Kielt's personally tally with 4 frees and two from play, but the home side relied on Moore much more than the visitors relied on Kielt to take their scores.

Ballinascreen continued their unbeaten league run with a one point victory over the visitors on Saturday evening. High scoring from Jon Paul Devlin and Barry Grant helped the home side to the win, whilst Conor McGrogan finished highest scorer for the visitors with a four point tally.