The Derry forward was withdrawn from the semi final after an injury. 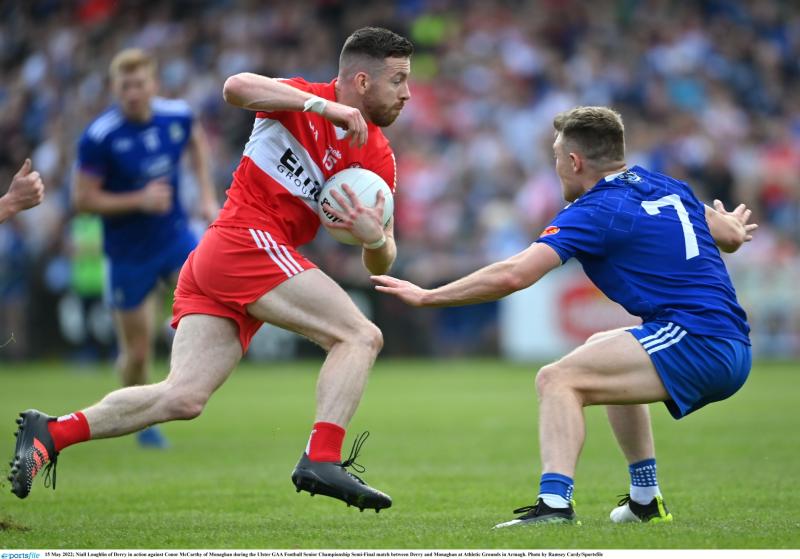 Derry manager Rory Gallagher has said Niall Loughlin is “good to go” ahead of next Sunday’s Ulster final with Donegal in Clones.

Loughlin was replaced by Emmett Bradley after 41 minutes of their win over Monaghan and looked to be a doubt for the county’s first appearance in the decider since 2011.

“No,” was Rory Gallagher’s response when asked if there was concern over the Greenlough man’s availability.

“In fairness we got Niall scanned a couple of days after it and he has no hamstring injury or tear,” said Gallagher, who pointed to it being cramp coming from a back problem earlier in the season.

Loughlin scored 0-7 in their win over Tyrone and was on target with a point from play during the first half of Sunday’s semi-final.

“Niall is good to go,” Gallagher confirmed. “He had back issues at the start of the year and it flared up a wee bit.

“We are out (training) on Sunday and if we get through another couple of more training sessions and he should be fine.”

Derry are bidding for a first Ulster title since 1998, when Joe Brolly bagged a late goal. The only link with the current team is selector Enda Muldoon who was a key cog in Derry’s win.

ULSTER SFC: A decade in waiting for goal hero Heron