Erin's Own clinched the points in stoppage time at the weekend. 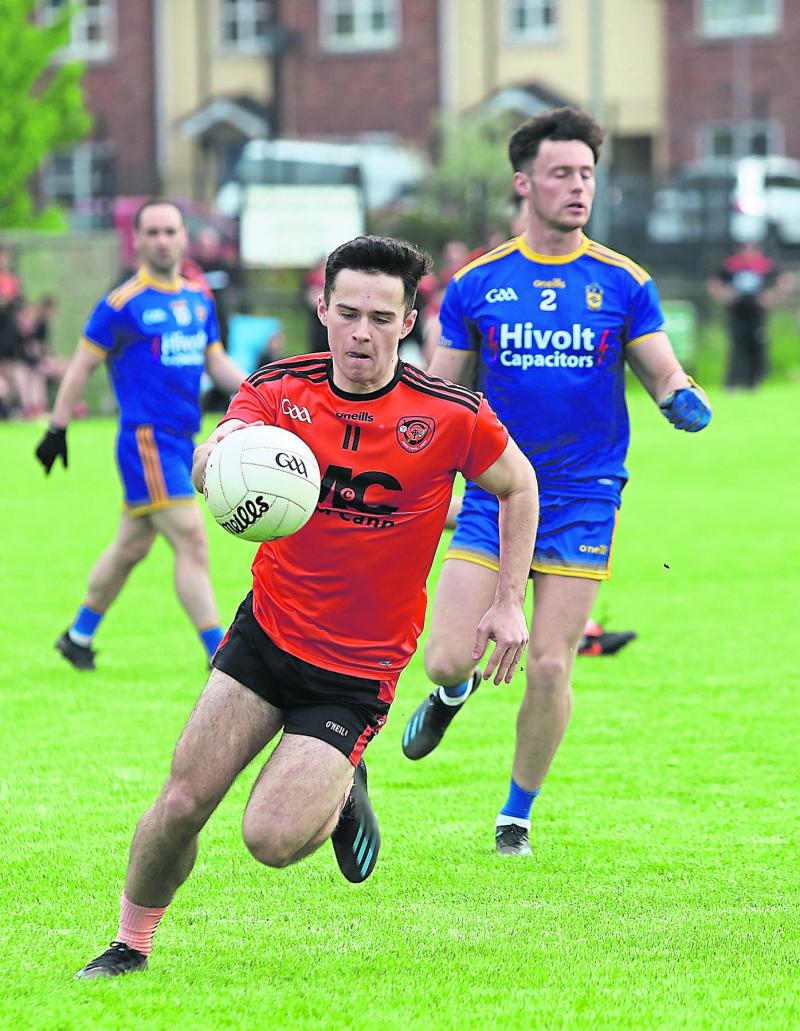 A point from Thomas Donnelly in added time saw Lavey take the win and deny Steelstown at the end of an end-to-end contest at Pairc Bhrid on Saturday.

Hugh McGrath has probably seen it all at this stage, but even he will be scratching his head as to how his team lost this one, with Steelstown leading the game from the 15th minute until the 58th when a dogged Lavey pulled level before going on to win it.

Steelstown will reflect on plenty of missed opportunities, particularly two late wides from Cahir McMonagle late on, just when it seemed that the forward had done enough to create his shooting opportunities by turning defenders inside and out.

Back in senior football after their historic All-Ireland winning season, it was been a tough ride for McGrath and his players at times so far, with several key players missing to date.

Nevertheless, this was a game they certainly should have seen through and while there is plenty of football to be played and ultimately no relegation this season, there was a lesson to be learned here for Brain Ogs about seeing games out at the highest level.

Conan O’Kane got the scoring underway in the very first minute after a Diarmuid Baker foul had given him an easy free, and a strong start from the visitors almost resulted in a goal only for Steelstown goalkeeper Adam Harrigan to deny James McGurk with a good save at his near post.

Steelstown slowly made their way into the game and McMonagle briefly levelled before Lavey edged clear through points from Conor Mulholland and Anthony McGurk. At this stage the Lavey attackers were enjoying too much space, a fact that didn’t escape the attentions of McGrath who let his defenders know about it.

At the other end, Steelstown finally began to click and Mickey McKinney and Mark Foley both got off the mark to bring the sides level at 0-3 each, the latter of which was a tremendous score from wide on the left.

But the momentum didn’t stay with Lavey, as they showed a grit which would continuously frustrate Steelstown throughout the hour; they stretched clear again with two quick scores from James McGurk, who was popping up in dangerous areas continuously and making the most of them when he did.

It took a moment if inspiration from Cahir McMonagle to shake Steelstown from their slumber s he sped in from the right wing, right to the net where he attempted to lift the ball over the goalkeeper. Whether it was an attempted pass or an attempt for a point barely mattered, as the ball hit off the post before falling into the path of Mark Foley, who drive it left-footed past Sean Scullion and into the Lavey net.

At 1-3, 0-5, Steelstown were ahead for the first time in the game and Emmet Deane and Foley again, popped up with scores to add to the growing confidence of the home team, who were visibly boosted by the opening goal.

A poor kick out by Harrigan gifted possession to Ryan McGill and he set up Liam Murphy, who interrupted the Steelstown momentum with a score at a crucial time in the game. McMonagle for Steelstown and James McGurk for Lavey then traded points, with three the difference as half time approached.

Lavey could well have gone into the break ahead when Liam Murphy was found in space in behind the Steelstown backline, but, not for the first time, Harrigan bravely parried the shot and kept the ball out of the net to keep his team going into the break.

Lavey were out of the gates strongly in the second half and Murphy, at the second time of asking, beat Harrigan, but not the post as the ball cannoned back off the upright with the Steelstown goalkeeper watching on.

There back a series of tit-for-tat scores as Steelstown tried in vain to shake their opponents off; Neil Forester winning a free which McMonagle converted, before Lavey goalkeeper scored from a ’45. Forester was doing his level best to keep his team on the front foot, and another burst forward set up Foley for a score, just seconds before McMonagle hit the crossbar with another effort. In turn, Murphy hit the post again at the other end before Patrick McGurk finished off the rebound to keep his team within two points at 1-8, 0-9.

Steelstown looked to have secured the victory at the midway point of the second half when the energetic Gareth Logue exchanged passes with Forester and went through to drive the ball under Scullion and under the net. That made it 2-8, 0-9, giving the hosts a five-point lead with just 15 minutes remaining.

Strangely that goal only seemed to jolt Lavey into action and their response to that blow was impressive. Conlan O’Kane and Declan Hughes reduced it back to three, and there was a huge scare for Steelstown when Shane McGill was found in behind, but just as he was preparing to shoot past Harrigan, he was crowded out by a number of blue shirts and the chance was gone. Nevertheless, it was clear this game wasn’t over.

The game was so open at this stage as Steelstown then attacked and Foley had a path to goal blocked at the last second before substitute Callum Deery took the point.

With the minutes ticking away quickly, Lavey gave it one last push, and got their rewards for it. After Murphy took a score to make it 2-9, 0-12, Patrick McGurk raced through the centre to find Conlan O’Lane, who lashed the ball past Harrigan to level the game with just four minutes remaining.

It then became a case of who could hold their nerve; McMonagle put Steelstown ahead again but Patrick McGurk levelled at 2-10, 1-13 to set up a tense finale.

Steelstown were left frustrated as referee Terence McGilligan gave a free kick against them at one end, and they then conceded at the other, a superb effort from Donnelly giving Lavey the lead for the first time since the 15th minute.

There was time after that, but just not enough for Steelstown to find another score, and with the final whistle, two points that had seemed theirs for so long were leaving Pairc Bhrid in the hands of a Lavey team who just wouldn’t go away.

Steelstown’s Gareth Logue led by example just through sheer effort, particularly in the second half. He threw himself into everything and that persistence saw him rewarded with a goal that looked to have taken his team closer to a morale-boosting win.

The late Lavey goal was reward for their never say die attitude and gave them a real chance of winning a game in which they trailed for so long. Patrick McGurk raced through the centre to find Conlan O’Lane, who lashed the ball past Harrigan to level the game to set up their winning finale.

SCORE OF THE GAME - Donnelly point

Thomas Donnelly picked the best time to get his first point of the game, as he kept his nerve from wide on the right to send the ball between the posts in added time. That proved to be the winning score and Steelstown were left wondering what might have been.

Alex Doherty starsed as Glen took the points at the weekend.