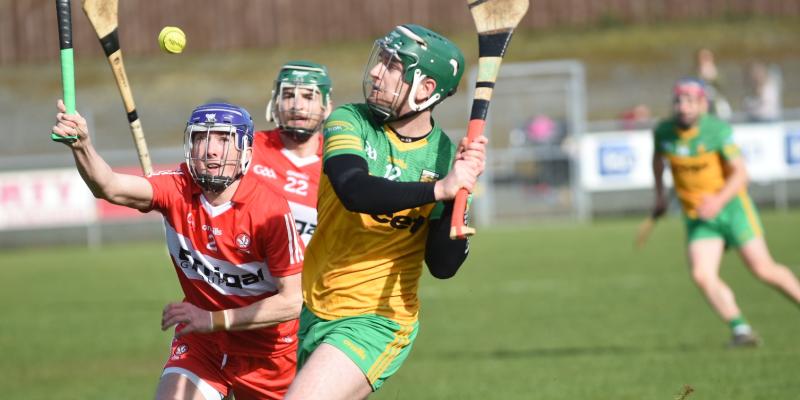 Donegal's Gerry Gilmore tried to get the ball downfield despite the attentions of Derry's Ciaran Hendry. Photo Geraldine Diver

A superb final 20 minutes pushed a Derry side with loads of power and panache, into a Division Two B final against a game but ultimately outgunned Donegal side.

The impressive winners hit a stunning 0-9 to their opponents 0-2 from the 48th minute to the finish as their bigger stronger men opened their shoulders and the points flowed freely in O’Donnell Park.

But they got nothing easy from a battling Donegal side who actually led this contest for 44 minutes after turning over in front by 0-10 to 0-7 in a wind assisted first half.

However, they badly missed the physical presence and hurling nous of the injured Ritchie Ryan, Jack O’Loughlin and Michael Donoghue and were no match for the visitors in the final 20 minutes.

Derry was minus the towering Tiarnan McHugh, Richie Mullan and Eamon McGill but showed their strength in depth especially when they brought on Slaughtneil star Gerard Bradley who responded immediately with two great second half points.

Another Slaughtneil star, Cormac O’Doherty, hit a most impressive 0-10 from placed balls as Donegal struggled to cope with Derry’s surging physical power which eventually opened the floodgates in the final quarter.

But Brian Óg McGilligan, John Mullan, Declan Foley and Odhran McKeever really stood up in the second half to drive their side to victory.

The opening stages were cagey before Donegal team captain Ronan McDermott hit a soaring point as the home side had a wind assisted first half. But, a physically powerful Derry hit back with a pointed free from Slaughtneil marksman Cormac O’Doherty.

That set the pattern for a ding dong, hard but fair hitting first half as both sides signalled that this would not be a dead rubber. Daire O'Maoileidigh finished off a well worked Donegal move to edge them in front in the 6th minute after great work from Declan Coulter. 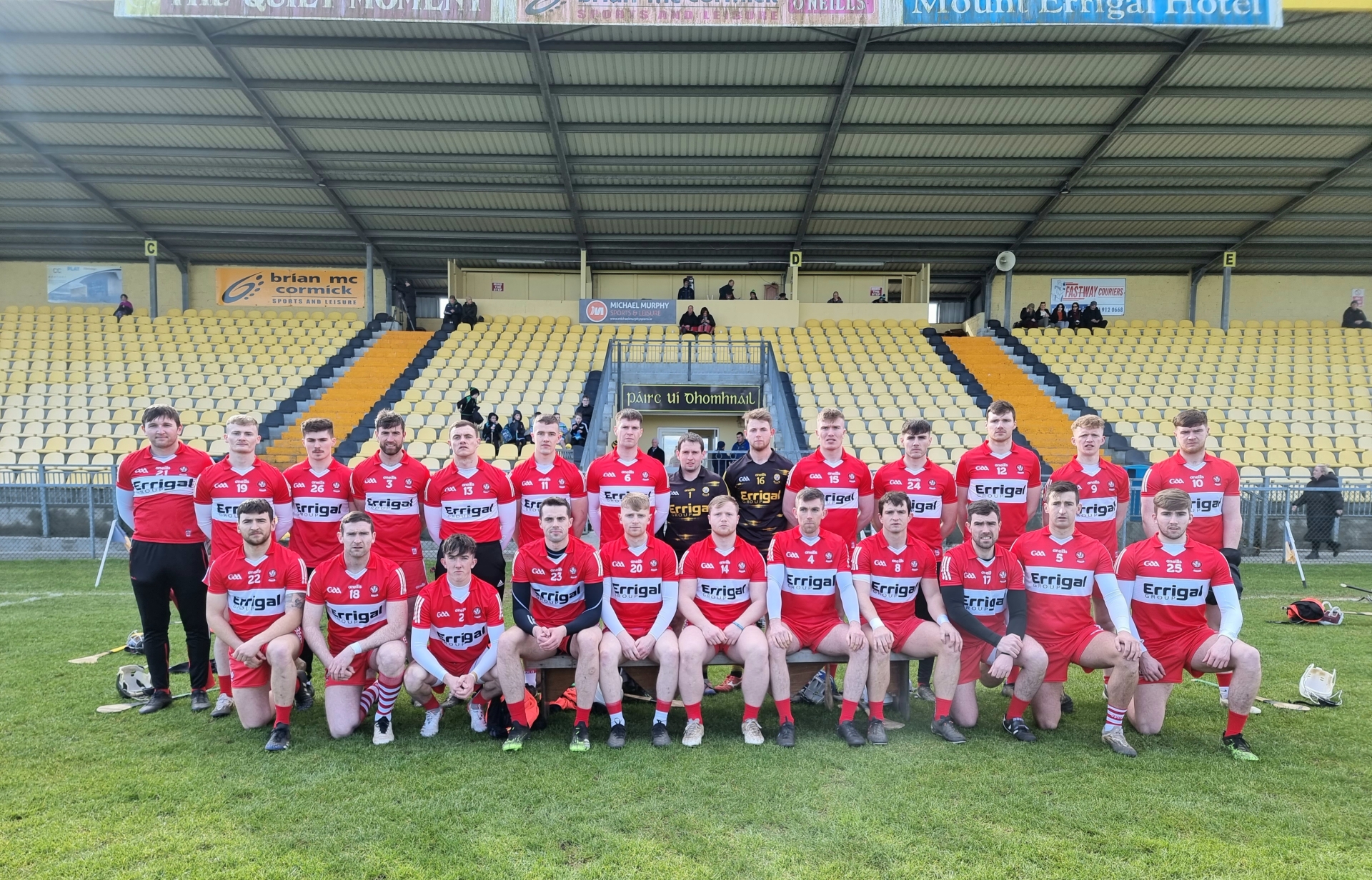 The remainder of the half was a contest between O’Doherty’s frees- a fine effort from Darragh McGilligan and some well executed scores from Donegal’s Coulter who hit one monster free from 100 metres, Brian McIntyre and Flynn.

Derry had loads of chances but managed to hit eight wides to Donegal’s five in this half and they seemed a bit jittery at times.

But, both defences were on top in this half and there were no goal chances created in a full-blooded encounter. The margin of 0-10 to 0-7 did not look quite enough for Donegal as they faced into a stiffish second half breeze.

But they managed to just keep ahead for the first quarter and led by 0-12 to 0-10 eight minutes into the second half. However, that was as good as it got for the home side as O’Doherty mercilessly punished all indiscretions and Derry began to hurl with real poise and power.

The excellent Darragh McGilligan levelled matters for the first time in the 45th minute and O’Doherty gave them a deserved lead for the first time, a minute later. From there to the finish it was all Derry who won all the big midfield battles with McKeever, Foley and Brian Óg McGilligan hitting some great scores.

Donegal kept fighting but were not able to make any real impression on a powerful Derry defence. But, you get the feeling that these two sides could be destined to meet again as Donegal are already in the semi-finals.