The Ulster dream is still alive for Steelstown! 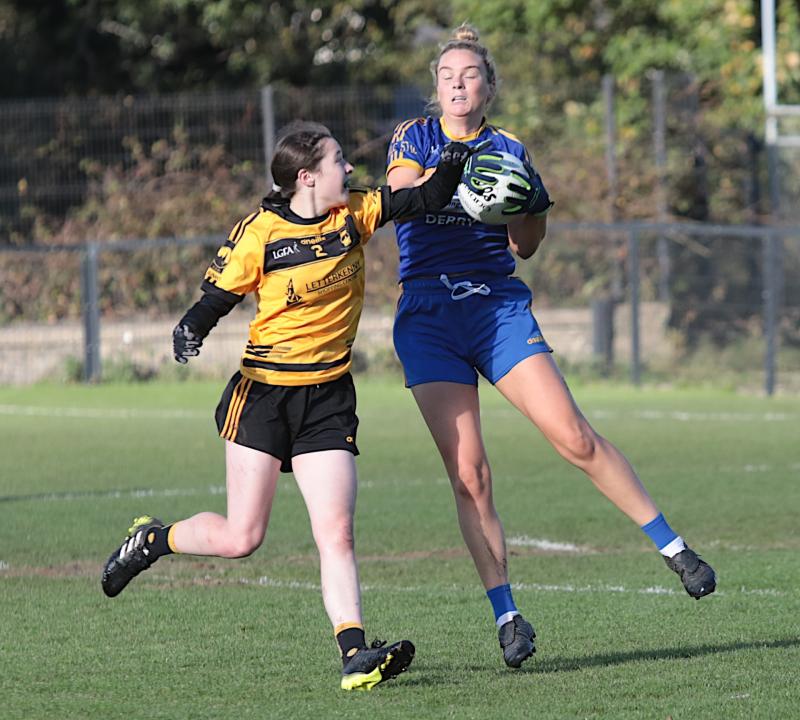 Steelstown Ladies are just one game away from an Ulster final. Pic by Tom Heaney, nwpresspics

Steelstown Ladies are just one game away from an Ulster final as they head to Belfast today to face Antrim champions Niamh Brid.

Kathryn Canavan is expected to return today after missing last week’s quarterfinal win over St. Eunan’s at Pairc Bhrid, and her experience could prove vital for a team that conceded 5-8 but still managed to win in one of the most incredible Ulster games ever played.

Four goals from Leah McGonagle took Steelstown to a 6-18, 5-8 win in a game which was not settled by any means until the final five minutes. As impressive as the girls in blue were in attack, they could just not shake their Letterkenny opponents, who refused to lie down.

Manager Thomas Cusack had thought he had seen it all in the game, but even he admitted to being shocked at the events on the pitch as a total of 11 goals were scored and 55 points combined. The most important thing after a game like that was the result, and it was Steelstown who progressed to the last four in Ulster.

“We’re in the semi-finals and that’s what it’s all about all the day getting a result in the quarterfinal,” Cusack said afterwards.  “I’m at this 10 years now and it was the strangest, maddest game I was ever in. It was end to end and there was 11 goals which says everything. It was a great game and everyone got their value for money. It was just the experience of the team told out in the end, all the older heads stood up and shepherded us through to get into the next round.”

This week’s opponents St. Brigid’s join Steelstown in the last four after easily seeing off Killeavy from Armagh on a scoreline of 0-9, 5-12. They proved they have serious firepower in that game, while Steelstown showed great character to keep fighting against a tenacious opponent, qualities that could serve them well in Belfast.

“Letterkenny never gave up and they deserve credit for that,” Cusack continued. “I’ve watched Letterkenny before and they do play good football and they will attack you. They are a good young team and it was a great game to be involved with. We got over the line and that’s what it’s all about at this stage of the competition.

“There are no bad teams in Ulster. Everyone is coming out of their own counties. Some people might see Derry as the weaker of the sides but we proved it there that we are able to battle against anybody and that we can football against any team in any county.”

In terms of players to look out for this weekend, Leah McGonagle will surely be first on the team sheet, as her tally of 4-4 makes her a serious problem for St. Brigid’s. But with 7 different scorers on the day, Cusack is content that he won’t have to rely on any individual to win the game.

“It was a great performance from Leah but I think all the forwards played well,” he explained.  “They were very dangerous and we know that if we get the right ball into the, they can score. Throughout the Championship it has always been about the defence which has been dominant at keeping teams quiet, but this time it was all about the forwards doing it for us.”

After seeing their Ulster Championship campaign ended prematurely last year after defeating Monaghan champions Magheracloone, this is very much bonus territory for Steelstown, whose dream of becoming Ulster champions   is now within their grasp.

“It’s one step closer,” Cusack agrees. “I tell the girls that every week is a bonus. We are just looking to go week to week and we are away to St. Brigid’s now. We’ll just go and play football; our shackles are off, we’ve won our Championship and we’ll just go and have fun now for the rest of the year.”