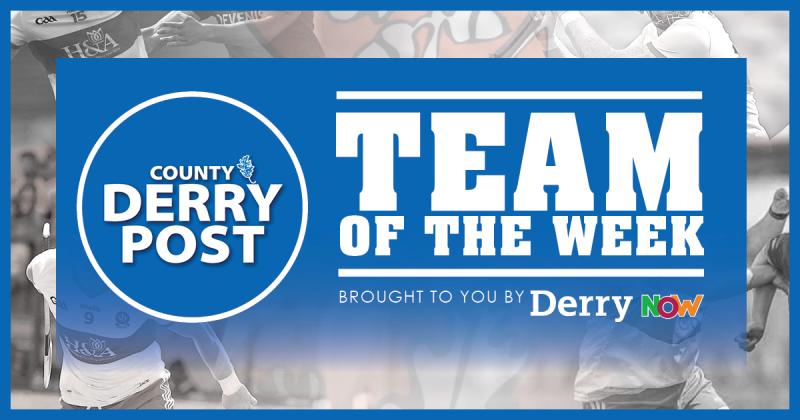 After a week of action from Derry county teams and the local club scene, here is our team of the week (ending Sunday, August 22).

1 – Alisha McClenaghan – Ballymaguigan U19 – In a game that swung from end to end, Alisha was steady all afternoon and gave the 'Quigan the platform to stay in the mix until their late winning goal.

2 – Eoin Ferris – Drumsurn senior – Tiarnán Moore was Banagher's dangerman all season and Ferris kept a tight eye on him, holding him to one point from play.

3 – Ryan O'Kane – Glack senior – Gary Keane has been shooting the lights out all season, but O'Kane limited his influence as Glack shocked Ballerin in the last game of the season.

4 – Sinead McGill – Derry senior – A late addition to the starting line-up, but put in a big shift. Her block denied Meath an early goal and she defended strongly throughout.

5- Declan Brown – Bellaghy senior – It was Bellaghy's running game that paid dividends early on and Brown got forward from wing-back to kick two scores in the first half against Loup.

6 – Eimear Stuart – Ballymaguigan U19 – In the game of the week, Magherafelt looked like they'd done enough to force extra-time. Stuart had other ideas and scored a cracking winning goal, one that would grace any stage.

7 – Ryan McCann – Lissan U16 – No matter where Claudy kicked the ball in the first half of Thursday's final, McCann was there. He was immense in every way, played on the front foot and scored 3-3.

8 – Aine McAllister – Derry senior – Once again, Aine McAllister was the driving forward for Derry's camogie challenge. She notched nine points and had a hand in both goals.

9 – Tiarnán McHugh – Kevin Lynch's/Drumsurn senior – He bagged three points from full-forward as Kevin Lynch's saw off Ballinascreen in midweek and 0-4 midfield as Drumsurn beat Banagher to clinch the league title.

10 - Brendan Rogers – Slaughtneil senior – Lavey kept with Slaughtneil for most of last week's hurling clash before Rogers hit 3-2 to round off a fine end to the league after his return from Derry duty.

11 – Richard King – Limavady senior – The Wolfhounds enjoyed wins over neighbours Glack and Magilligan during the week and King amassed 2-10 across the games.

12 – Odhran McFeely – Foreglen senior – His five points from play was enough for Foreglen to see off Slaughtmanus and it was his composure near the end that mattered most.

13 – Brid Peoples – Claudy U19 – Claudy turned around a slow start against Coleraine to take championship honours at the weekend and Brid Peoples played her part with a 2-1 tally.

14 – Aideen McGonagle – Craigbane U19 – Lissan pushed Craigbane all the way in a recent league game, but scoring power made the difference in the Sunday's final, and McGonagle scored 3-12.

15 – Luke McElkennon – Lissan U16 – He was comfortable kicking off both feet and was a constant outlet at full-forward. His 6-10 tally had Claudy on the back foot and Lissan on route to glory.