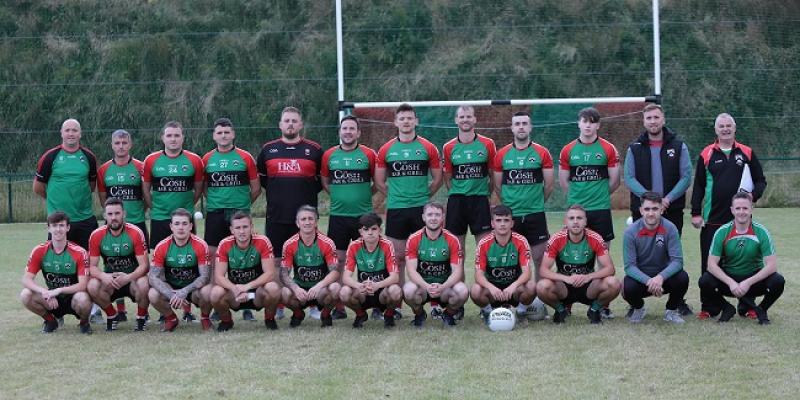 Doire Trasna marked their first senior game on their new pitch with victory on Friday night.

Call it ‘Pairc Na Piarsaigh’, call it the ‘Field of Dreams’, call it Corrody Road – for Doire Trasna, it’s home, and their senior team graced it with victory in their first game there on Friday night.

Eoghan Carlin and his players did not want to lose this one, no matter who the opponent was, and while at times they made hard work of it, they eventually got the job done in an entertaining game filled with incident that held the interest of a very decent crowd who came to watch a bit of history take place.

The future is rushing at Doire Trasna all of a sudden, and after 21 years of waiting they now have the facilities to really push the club forward, and the enthusiasm at the club at the past few weeks, from the kids at the Cul Camp, to the seniors on Friday night, shows that the appetite is there to keep the momentum going and to make the club stronger than it has ever been.

In the meantime however, it is about finishing the season as well as they can, and Carlin’s side have another four games at home, giving the every chance of setting a marker down and making their new ground an intimidating venue for visitors.

Doire Colmcile did their best to spoil the evening for their hosts. Coming to the Waterside with just  one point from seven games this season, few expected the challenge they produced, but this can only encourage Ciaran Quinn and his players, who will see this as an opportunity missed. There were some big moments in this game for Colmcille, not taken, particularly Ciaran Curran’s chance at 1-9 to 1-3 when he went one on one with the goalkeeper, went for power and the ball went over the bar when it should have ended in the net.

Quinn can probably point to a dozen moments such as that throughout this difficult season, but if they can produce this type of performance consistently, then that first win should not be too far away.

Colmcille goalkeeper Michael Nash had to be alert very on as Pearses almost scored a goal in the opening minute, saving from Colin Murray and then Ciaran McGowan’s rebound as the home side started strongly.

Two points for McGowan gave the hosts a good foundation, and when Conor McCartie went off  injured, it seemed to all be going wrong for Colmcille.

But the visitors, showing an appetite which would keep them in the game throughout, hit back and points from Mickey McCallion and Malachy Campbell levelled the game at 0-2, 0-2 after 10 minutes.

It was back and forth as both teams went for it and Pearses went two ahead again through Murray and Eoghan Quigg. That momentum was stalled however when Paul Quigley lost the ball and Ciaran Curran and Campbell set off on goal in a two-on-one attack, which ended with Curran blasting the ball into the roof of the Pearses net. The first senior goal at the new ground was scored by an away player and it gave Colmcille the lead for the first time at 0-4 tp 1-2.

Within three minutes – and Quinn will no doubt go over this with his players – that lead had disappeared completely. After Quigg hit a free to level, referee Michael Kelly awarded the home side a penalty for an off the ball incident which Quigg drive home to make the score 1-5 to 1-2.

Here Pearses pulled away for the first time, scoring four of the next five points,  Sean Fleming, Damien McGee, Michael McNaught and Quigg scoring, while McCallion had a solitary reply for Colmcille.

Then came Curran’s moment which he wasted and Quigg scored another free to make it 1-10 to 1-4 with half time approaching.

Doire Trasna shot themselves in the foot again however as they lost possession deep in their own half and Curran set McCallion through on goal, but as he was about to shoot he was deliberately clipped by Tomas McCrossan and the second penalty of the game was awarded. Luke Clarke slammed the ball past Marty Healy and Colmcille were back in it at 1-10 to 2-4.

McNaught and Richie Stewart traded points and the half time whistle went with just three points between the sides.

In the second half, Pearses could not shake off Colmcille no matter how hard they tried. Quigg and Eoghan Devlin added points but two from McCallion kept Colmcille in touch. The away side enjoyed their best period around the 50-minute mark when Malachy Campbell and Conor Doherty each scored to make it a one-point game and it seemed the momentum was now with the visitors.

Just when his team needed it however, Eoghan Quigg produced a moment of magic, as he raced towards the goal and nonchalantly lofted the ball over Michael Nash and into the net for his second goal of the game. It was a brilliant strike and a huge blow to Colmcille at a crucial time in the game.

Scores from Campbell and Clarke showed that Colmcille were not for giving up, but points from Colin Murray kept his side just out of reach. Michael McNaught then got what proved to be the final score with a free on 63 minutes, and the home side held out after that to claim a victory that was more about the points on an historic night for the Waterside club.

They really wanted to win this one, and they did.