Preview: A look ahead to Derry's Ulster championship showdown with Donegal 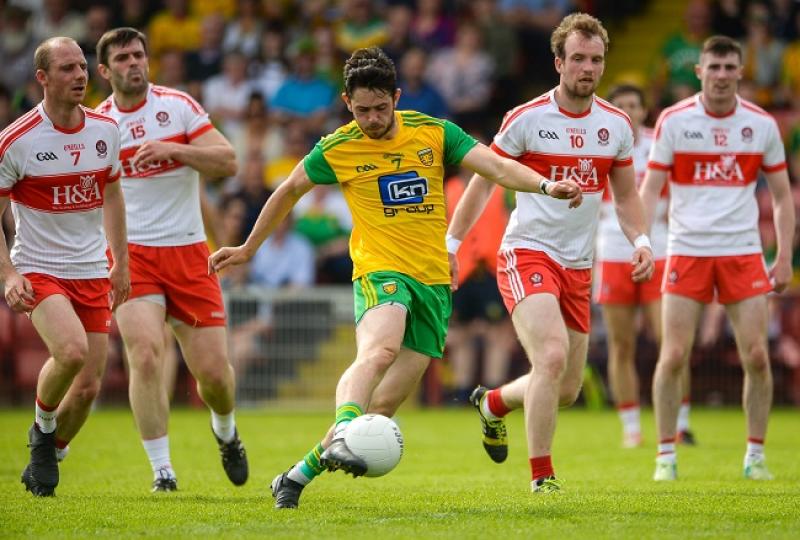 Ryan McHugh gets through the Derry cover in the 2018 meeting of the sides. (Pio: Oliver McVeigh/Sportsfile)

Optimism. No matter which way you turn in the Oakleaf County, a generous dusting of satisfaction has been sprinkled over the footballing landscape.

There is a sense of relief that the lower reaches of the leagues are in the past, with a group of players moving in the right direction.

Chrissy McKaigue standing at the top of the Hogan Stand steps was the window-dressing on Derry's second promotion in three seasons.

Any run out at headquarters is invaluable and gave this new-look Derry side a taste of of playing on the biggest stage, with an appetite to return when the stakes are higher.

Three points in as many minutes in the second-half in Carrick on Shannon put an end to any hopes a well-drilled Limerick side had of stopping the progress.

Since the, it has always been about the championship. In an interview with The Irish News, Antrim manager termed Sunday's date with Armagh as a 'free shot', with no level of expectation and nothing to lose.

To those outside the Derry football camp's cocoon, there is the same feeling. Donegal are a step too far. This year was all about the league. Its a building process. Bonus territory is Derry's safe zone.

Not in Rory Gallagher's book. A telephone interview last week may not offer the chance to read someone's body language, but the Derry's bosses words were as clear as day. Derry have been preparing for Donegal from a few corners earlier in the track.

Conor Glass omitting the word Down from the equation during interviews after the league final. This alone points to a camp chomping with a full focus on Donegal.

Eight players made their championship debut against Armagh last season, but of the players who featured in the league this season, Shea Downey and Conor McCluskey would be the only likely debutants this time around, should they feature.

McCluskey started ahead of Paul McNeill in the league final and will be pushing for a start. Brendan Rogers is fully fit again and the Derry manager has stressed he will be back in the starting team.

Rogers picked up Paddy McBrearty when Slaughtneil met Kilcar in the Ulster championship in 2017. McBrearty kicked 10 points, but not many of them came as a result of a one on one battle. It was his taking the ball around on the loop before arrowing over that did the damage.

This was an element that was evident from Donegal's win over Down. The angle and variation of the support runs gave Donegal a great platform. Hugh McFadden ghosted from his sweeper role to contribute. Ryan McHugh, Ciaran Thompson and Michael Murphy all made the snowballs and McBrearty threw them.

It might tempt Rory Gallagher to double up on him. With McNeill or McCluskey likely detailed on Oisin Gallen or Jamie Brennan up front, Derry could put Paudi McGrogan as the shadow on McBrearty's left foot. Any limitation at all would be a huge boost for the visitors.

Such a change in tactic from the season could see Paul Cassidy miss out. It would leave Chrissy McKaigue to do a marking job on Ciaran Thompson. Conor Doherty would pick Peadar Mogan, a reunion from the 2016 minor final won by Donegal. If Odhran Mac Neilis makes what would be surprise return from injury, it could see Niall O'Donnell moved inside alongside McBrearty.

Donegal will think long an hard about who plays at centre forward and they won't do an Offaly and give Gareth McKinless the inch that he magiced into a mile and destroyed them with. Bonner will most probably engage Hugh McFadden in the plans for McKinless, a stopper, making sure the centre of Donegal's defence has a presence.

There are so many permutations. Will Rory Gallagher allow Shane McGuigan to be swallowed up by a sea of yellow jerseys in the parish close to goal?

If the Slaughtneil man goes to centre forward, Odhran McFadden-Ferry, their specialised man marker, will almost certainly go on him.

The Donegal defence didn't give Down a sniff in the first-half, keeping any forward activity clear of the goal-scoring danger zone. Derry will take heart how Caolan Mooney cut through after the break and that Down could've had at least another goal as the game developed.

If either defence can limit McBrearty and McGuigan's stamp on the game, it is going to come down to a game of chess in the middle zone.

Last year, Armagh dropped a man back and allowed Odhrán Lynch freedom on his kick-outs. It's hard to see Donegal allowing that to happen with the threat of McKinless and Padraig Cassidy getting on the ball through midfield. Down were shut down and made to scrap for the breaks around the middle.

This will lump the responsibility on Conor Glass, Emmett Bradley, McFaul and Shane McGuigan – if he is a free role – to win primary possession. Then, it is a good old fashioned battle for possession, mixed with enough short kick-outs to mix up the approach.

That was one of the biggest pluses from the win over Cavan, how Derry were able to build two separate game-winning leads on limited midfield possession. But Donegal are not the same outfit, mentally, as the one overturned by Cavan last year.

Perhaps Derry's greatest conundrum is what to do with Ryan McHugh and Eoghan Bán Gallagher. McHugh is their playmaker all over the field and his versatility makes him impossible to tie down. Then you have Eoghan Bán's running power from deep. That's where Derry need to put Ciaran McHugh and Padraig Cassidy on the duo, in one to one battles on opposite flanks. These two battles are in the game changer category.

Add in Conor Glass versus Michael Langan. Glass has been Derry's silent and reliant constant through the season. Plugging holes wherever it is needed. Langan grabbed the headlines for two wonderful goals. Glass likes to defend. Langan loves getting forward.

These are the battles Derry have to relish. This is the landscape they are going to meet from now on in, if they are to reach the summit and become a seasoned Division One team again. Derry will have the confidence that their fitness levels can match Donegal's as they go down the tracks.

The game will come down to two things. How well can they curb Ryan McHugh, which in turn will dictate the flow to Donegal's attack and how many of their own kick-outs they can win.

If Derry can come out on top in these two areas, they are in with a puncher's chance of a first championship game since 2015. And if they can't, then that search stretches into another season. Roll on Sunday, but I give my hesitant nod to Donegal.