Derry and Tyrone to meet in refixed 2020 semi-final

It's the fifth meeting of the counties in as many seasons 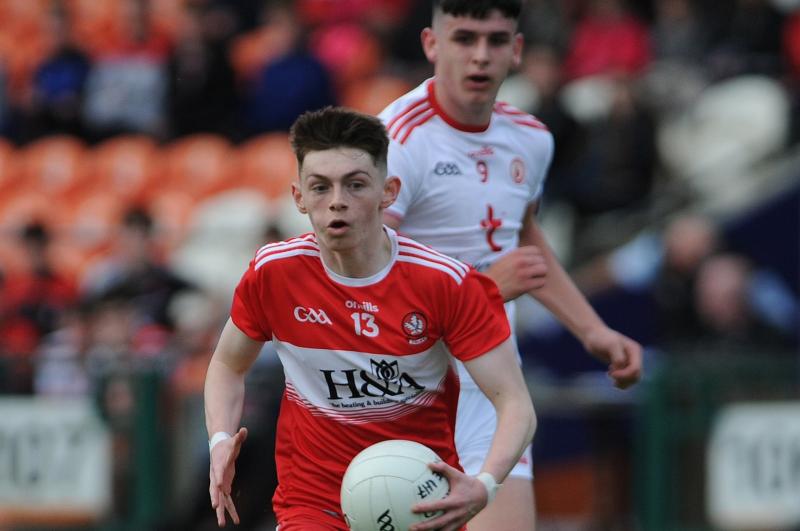 It wasn't the best Christmas present Derry minors could've received. Shortly after half four on Christmas Eve, the news pinged into their phones of the decision to postpone their Ulster Semi-Final with rivals Tyrone.

It was the third time the pause button was pressed on their championship odyssey and now, a staggering 188 days after their win over Armagh, Derry will face the Red Hands in Saturday's showdown.

“They deserve their opportunity and I'm delighted the GAA and the Ulster Council have made the decision to finish the competition,” said Derry minor boss Martin Boyle, who has to juggle the preparations with that of the 2021 crop who are only five weeks away from championship action.

“These cubs had their championship pulled three times, it's tough for them to deal with and it's the same for Tyrone, Monaghan and Fermanagh,” Boyle added.

He can appreciate those not involved directly with county minor teams would have the opinion of scrapping the 2020 competition. To just take the hit and move on.

“If I was on the outside, that thought would've crossed my mind,” Boyle admits. “But these boys are desperate to get this competition played, they are a special, special group. There is a rapport built up and almost like a club feel to it.”

The Ballinascreen man admits that while managing both the 2021 and 2021 minor teams at the game time is a 'balancing act' and limits face to face time with both squads, its a good problem to have. It beats looking out from inside the lockdown cocoon at empty pitches.

Going into the Armagh game last December, like the first round of any minor championship, the Derry management didn't know where they were at and after having a game under their belt, the lay-off has left them back at square one.

The Oakleafers could be going into Saturday's game without four starters from their last game, but Boyle has had time to plan around his absentees. He feels the management have a better idea of their players now.

Sean Deehan's cruciate injury and a knee injury to Ray Dillon have forced them out and Boyle rated their loss as 'colossal'.

Mark Doherty picked up an injury in Newbridge's recent defeat to Coleraine in the senior league, while Peter McCullagh is on his way back from an ankle ligament injury.

Calum Downey, who came on as a substitute against Armagh due to the management of his groin injury, looks set to miss out this weekend.

“There hasn't been much progress and this game looks like it is going to come a bit too early,” Boyle stated.

“He hasn't been on the training field and he is a big loss when you see what he can do.”

On the flip side, Ryan McEldowney is back pushing for a place after overcoming a hip injury and Niall McGonagle returns to the selection mix.

Their attacking options have been given a further boost with the return of Darragh Wade to training  and Lee Brady has recovered from a knee injury.

"We played with the handbrake on in the first half"

Donncha Gilmore missed the Armagh game with a cruciate ligament injury, but had rehabilitation 'signed off'. He made a substitute appearance in Steelstown's draw with Banagher and is reported to be going well in training.

Boyle has been happy with the development of the three U16s on last year's panel, Ballinderry's Niall O'Donnell and Lavey duo Niall Duggan and Patrick McGurk who starred in the club's U16 final win over Dungiven.

“We see a big development in the three U16 lads. They have matured, stepped up and will be pushing for the team.”

While the management juggle two teams, Boyle is happy that the club football in recent weeks has 'stood to' his squad. Their weekend sessions together have been more about video work and getting the focus for this weekend.

“Sometimes less is more when you are in a hectic club season,” Boyle offers, while highlighting the difference in their preparation from their two previous windows during the winter and autumn months. In his opinion, the time suits Derry. The long evenings and the better weather.

“We think it suits these boys and there is another four or five points in them in the better conditions,” stated Boyle, who like Tyrone coach Conall Lavery sees it as an important factor in how the game will pan out.

There have been reports of Ruairi Canavan and Conor McGillion injury doubts, two players that Derry will have flagged up as key players.

When St Ciaran's Ballygawley played St Colm's Draperstown in the Arthurs' Cup final last year, Canavan's duel with Connor Shiels was worth the admission fee alone. Another instalment on Saturday would an intriguing prospect.

Of the last five minor championship meetings of the counties, Derry have won four with the Red Hands, under Collie Holmes, defeating the Oakleafers in the 2019 Ulster Semi-Final.

Saturday is an old season with a new feel. If Derry can absorb their injury worries and limit the influence of Ruairi Canavan, an Ulster Final berth is not beyond them.