Archive: Derry battle their way to victory in Cavan 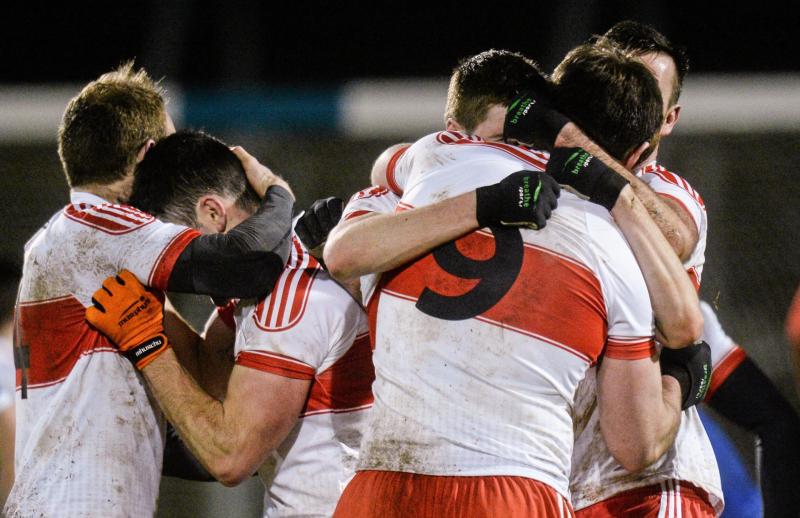 A free from Mark Lynch, with five minutes remaining, proved to be the clinching score on a bitterly cold night at Kingspan Breffni.

Cavan threw everything they had at the visitors in a frenetic last five minutes, but Damian Barton's men stood up well to the challenge and squeaked home after what was a pulsating contest played at near-championship pace.

The Blues made most of the early running but they were hampered by dreadful shooting as Derry made the most of their early chances.

It was tied at 0-2 apiece after 10 minutes before Derry went into a narrow lead.  Derry had the chance to push further ahead but Ryan Bell's penalty routinely saved by Ray Galligan.

Could Cavan hold on against the gale?

Derry provided the answer with 70 seconds of the restart when Cailean O'Boyle palmed to the net.

And once James Kielt boomed one over from all of 50 metres from their next attack, Derry had the breathing space which looked like proving crucial in such a claustrophobic affair.

Martin Reilly and Herron exchanged points but, from nowhere, Cavan hit the front, before finding the net.  Michael Argue reacted quickest and rifle a shot first-time to the top corner.

Two frees from Mark Lynch edged them in front – and then sub Shane Heavron floated over a beauty to make it 1-11 to 1-9 and set up a frenetic final 10 minutes.

By the time three of them had elapsed, Cavan had clawed it back to a draw again with frees from McKiernan and sub Seanie Johnston but Derry were handed another chance when McKiernan fouled – and the reliable Lynch again converted the winner.