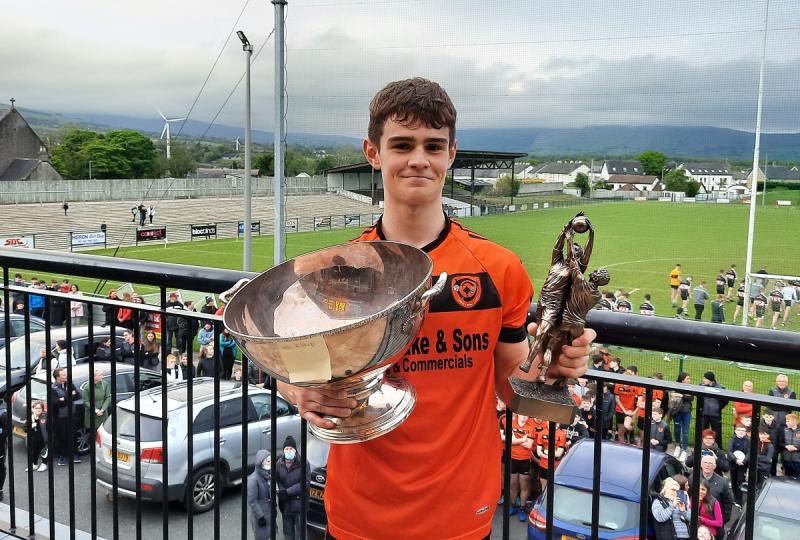 Lavey captain Patrick McGurk with the cup and man of the match award.

Lavey won their third U16 title in four years after a hard fought battle with Dungiven in Friday night's refixed 2020 decider at Ballinascreen.

Winning captain Patrick McGurk was named Man of the Match and was presented with his award by Rosaleen McAuley in memory of her late son Karl, who was instrumental in Ballinascreen's 2006 triumph.

In a tight encounter, Lavey needed every inch of their electric start which saw them hit the net after 12 seconds. Niall Duggan won the throw-in and set his midfield partner Segdae Melaugh on the run before he hammered an unstoppable shot to the top corner of Brandon Deeney's net.

Niall McKeever popped over a score for Dungiven before Lavey went on the rampage again. This time it was Rory McGill's searing run that ended with Conlan O'Kane's perfectly measured shot off which clipped the post before nestling in the net.

With Joe Dillon and Eoin Higgins linking well in attack, combined with and Brandon Deeney's varied and accurate kick-outs, Dungiven settled into the game.

After the water break, Dillon did the spadework on a move which saw Higgins palm home at the bar post and Dungiven were back in the game, 2-3 to 1-4.

Lavey had Niall Duggan and Patrick McGurk pulling the strings in the central area and went 2-7 to 1-5 ahead with the interval looming.

When otherwise assured goalkeeper Louis Regan lost the flight of a high ball, it took a goal line clearance from Charlie Curley to keep Lavey in the ascendency at the break.

Points from Odhran McElhinney and Eoin Higgins had Dungiven back in contention early in the second-half, but a Duggan point, from a killer Rory McGill pass, was another momentum changer for Lavey.

Dungiven did have a goal chance just before the second water break when Higgins showed a clean set of heels to the Lavey defence, but when he passed across goal, defender Cal Kuczogi did enough to flick the ball off the line.

As the game went down the final furlong, Dungiven were chasing a way back until a later Conlan O'Kane free sealed Lavey's win.

ALSO READ - Feature on the late Karl McAuley and the legacy of his Man of the Match Award.  CLICK HERE...