Louise Gunn is a selector with the county senior team 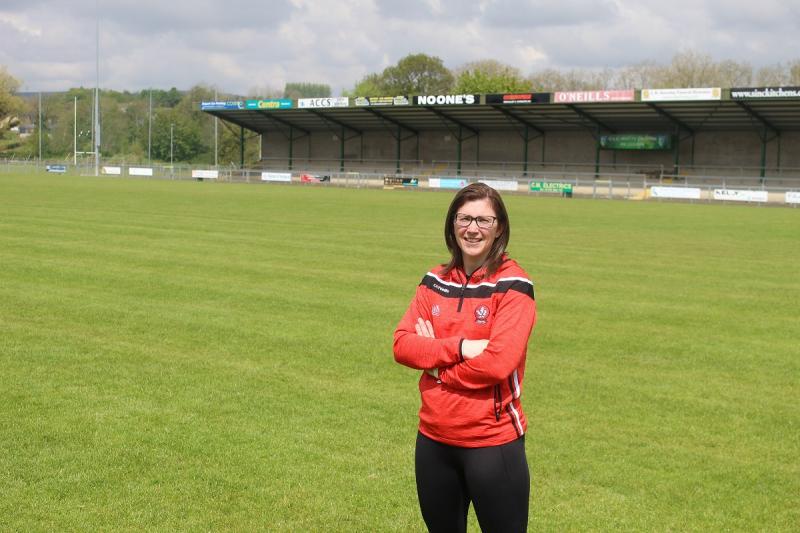 New Derry Senior Ladies selector Louise Glass says her new role has opened her eyes, but she is enjoying the involvement as part of manager Odhran McNeilly's management team.

Gunn, nee Glass, captained Derry to their All-Ireland junior final defeat to London in 2008 and a stellar club career with Glen.

McNeilly took over from Paul Hasson at the start of the season and has built a formidable backroom team. Former Antrim manager Benny Marron is on board as trainer, Claudy's Conor Johnston has been in charge of the Strength and Conditioning, with former Derry minor and U21 Ciaran McCloy as goalkeeping coach. John Coyle also joined the setup as performance analyst, using his new state of the art pitchside camera. 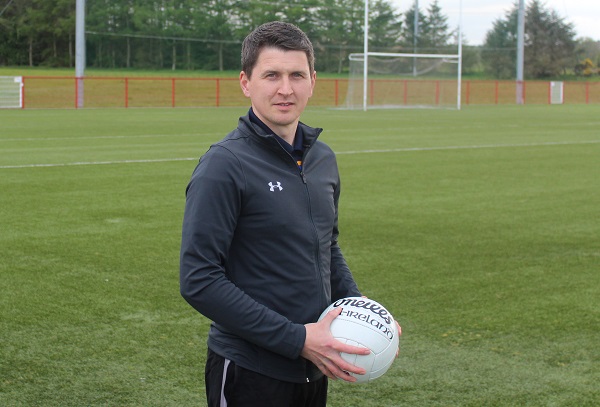 “It has opened my eyes, but it is great and I am really enjoying it,” said Gunn of her involvement so far. During her playing career with Derry, management wasn't something she saw herself trying her hand at. Maybe things would change after her playing career.

“Management frightened me and I wouldn't have the patience you'd require,” she jokes.

“Watching Odhran and Benny...their coaching, their management and way of thinking...it is eye-opening to me.”

Getting the call to join the setup was a 'nice surprise' and something that instantly appealed to her love for the sport she played since her early teens.

With a young family and work, there was a bit of consideration of how things fitted into the weekly schedule.

“There was a lot to consider, but when I was asked to do it, it was a big honour. There was a bit of thinking...but it didn't take me too long to reach the decision,” Louise points out.

Her mindset is all or nothing, especially with a panel of players giving '100 percent' commitment to the cause. The management team needs to match that ambition.

“It is the only way you are going to learn about your players and see what way things are progressing,” she added.

She may turn 38 next month, but Louise was back playing for Glen last season after a spell away from football with two daughters born in the last eight years.

“I have been about football in Derry for longer than I'd care to imagine, 20 plus years,” she points out, having started playing for the club since her early teens. Three Ulster Club titles and 14 senior county championships is no ordinary return.

“I have been out of the loop. I played for Glen last year, after having two or three years out. The players and the names, a handful I'd known from my playing days but the vast majority are new to me,” Louise continues.

Derry have only reached two All-Ireland junior finals, losing both. The last was 2017 when they had one hand on the cup, only for a late Fermanagh penalty forcing a replay which Derry lost.

The recent Ulster title is a rare moment to remember in a history laden with underachievement, something Louise agrees with.

“For the talent that is in Derry, even when I was playing back in the early noughties...without a doubt, and everyone will agree, we have underachieved,” Louise states.

She believes the talent in the county and with a collective push – at club and county level – silverware is there to be had.

“I don't mean just from the senior team, it is from the underage up. There is a huge amount of work that has gone into underage development in the last few years,” Louise adds.

The 'slow process' won't be an overnight sensation, but since coming on board with the county senior team, Louise is impressed with the tools at their disposal.

“The standard and the talent is there,” she feels. “Now, we have to get the girls to believe in themselves, as well as working in everything else we want to work on.” 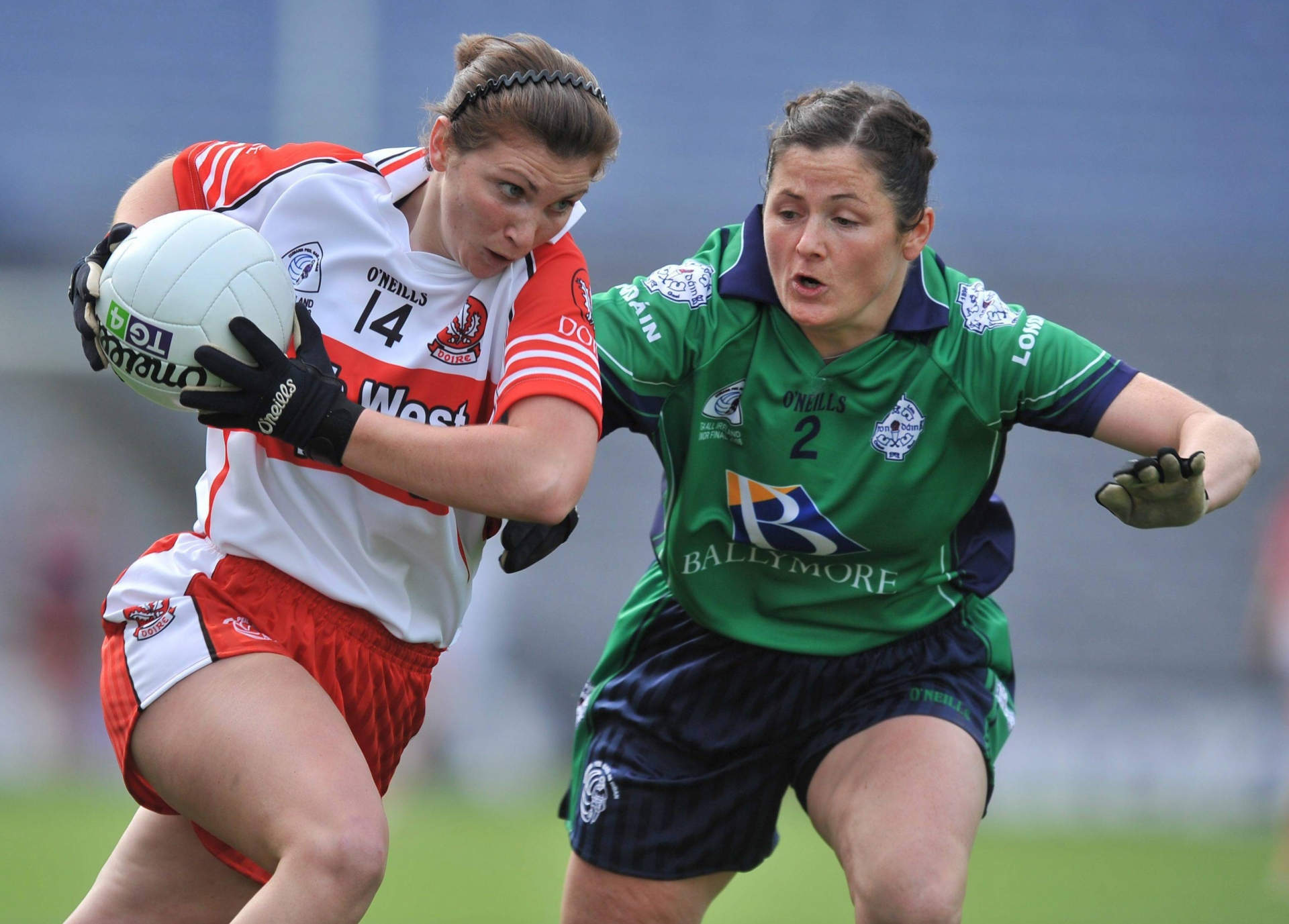 Louise in action for Derry in their 2008 defeat to London in Croke Park. (Pic: David Maher/Sportsfile)

Players need to believe they are as good as any other junior team in Ireland, with the step up to intermediate level a real possibility. The enthusiasm with which she talks copper fastens Odhran McNeilly's decision to bring her on board.

“It is the wee things like going that extra yard, chasing that ball down, making those runs, it is the small things that accumulate together to get you over the line,” she emphasises.

Her mind casts back to the 2018 All-Ireland Semi-Final when they had Louth on the ropes when the Wee County had a player injured, forcing a lengthy stoppage until an ambulance came to take the player to hospital. When the game resumed, Kate Flood inspired Louth to victory and left Derry distraught.

“That was Derry's game, but something happened that they lost it,” Gunn said.

“Like Antrim last year, we get ourselves into positions where things are going for us, but it is about seeing the game out.

“Hopefully with the right preparation, with Odhran and Benny putting the right things in place, we can see out those games. Derry have shown in patches what we can do, but we need to do it for 60 minutes.”

Going into Sunday's game with Antrim, there is an interesting sub plot. While Derry's management duo hails from across the Bann, Antrim's new manager Emma Kelly is a native of Desertmartin, who also played with Glen when her home club temporarily folded. She played for both Derry and Antrim.

“Odhran and Benny are from Antrim and they know a lot of the players. They didn't just take it (Derry job) on for the craic, they know the potential that is in Derry and they want to help bring success to the county.”

“There is a lot resting for everyone on it,” Louise concluded. “There are three points up for grabs and we want them badly. It will be a real battle.”

Nicole Nugent (Ballymaguigan) and Rachel McAllister (Ballinascreen) will join the panel on their return from university.

The top two teams advance to the league semi-finals