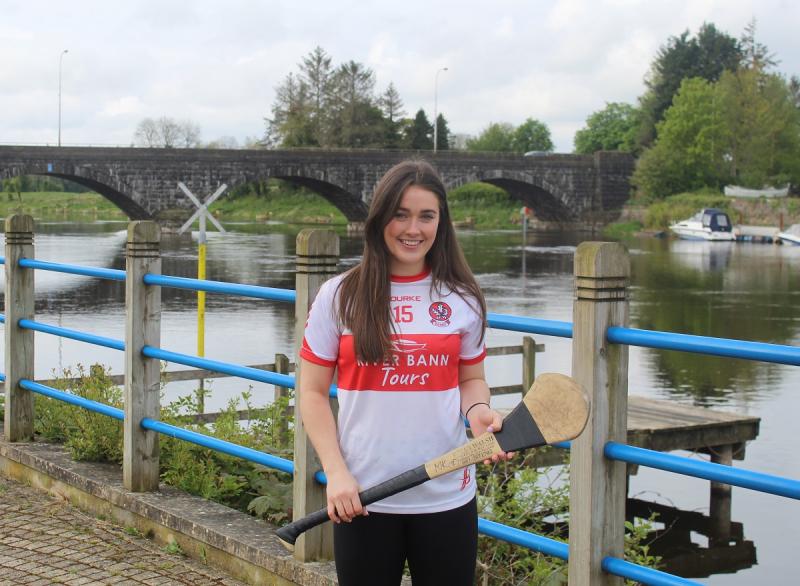 Derry's Megan Kerr is happy to see young blood being introduced to the squad.

Coleraine defender Megan Kerr is glad to see new blood in the Derry squad as the Oakleafers begin their 2021 season this weekend against All-Ireland champions Down.

Kerr was one of the stars of Ciaran Cunningham's side last season with notable performances at corner back and she is back to help lead Derry's influx of new talent.

At club level she was part of Coleraine's back to back All-Ireland winning teams while still a pupil at Loreto College where her talents saw her pick up an Ulster Schools' All-Star.

She made her senior club debut at the age of 13 and after operating at midfield for the first All-Ireland club title, manager Joe Passmore pushed her into the attack.

“She scored two points which were crucial, her pace was lethal,” Passmore recalls, of one of his key cogs in Coleraine success.

He is full of praise for that Megan brought to the table. She played the midfield role 'to a T' and was always eager to listen and learn.

In 2014, while a student at St Mary's teaching college in Belfast, Kerr starred as 'The Ranch' annexed the Fr Meagher Cup.

In the red and white of Derry, her defensive skills came to the fore in her marking ability. She shone brightest against Tipperary that season as the county won their first game in 60 years at All-Ireland senior championship level. Megan was named as Ulster senior camogie player of the year.

“Things are going very well, we are training hard and twice a week,” Kerr commented before training at Owenbeg last week.

“We are just preparing for our first league game against Down and that'll take us into the following week against Antrim.

Derry will face old foes Down on Saturday and while going into the game as underdogs against their seasoned opponents, they will take the game to the All-Ireland champions.

“That's the plan,” Kerr stated. “We are hoping that's what will come along. We know it just won't click and it won't happen automatically, we have to trust the process, what Ciaran has to say and what he is doing with us.”

She believes the Derry camogie development 'will come together', but it will take time and patience as they work together as a group.

Manager Ciaran Cunningham has admitted that his team is in transition and the influx of new players are the long-term future of camogie in the county.

“They are up into senior (championship level) and we know we always had a good battle with them,” she continued. “The aim is to go out and to give it our best challenge, working towards our championship and the following week against Antrim.

“We won't be sitting down and expecting them to walk all over us. We are hoping to give it to them as best we can, we are not going out there just to play the game.”

Without challenge games and with Down and Antrim starting their league action last Saturday in Portglenone.  The Saffrons won by a late goal, 1-13 to 0-13.

Derry are going in without knowing exactly where they sit. It doesn't deter Megan's approach to the game.

“There is only so much you can do in an in-house game,” she concludes. “It will be our first big challenge this year, to see where everybody is at, to try out the things we have been working on...we're looking forward to it.”