The GAA must take a different approach to 2021 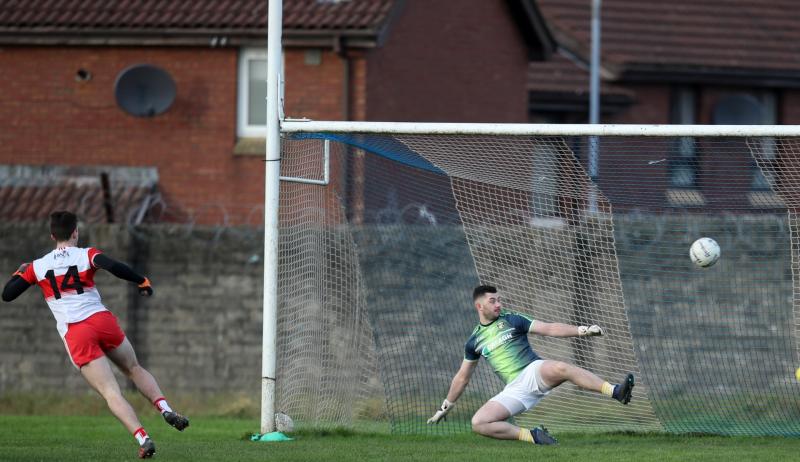 Shane McGuigan slots his penalty past Antrim goalkeeper Padraig Nugent in Derry's 1-10 to 1-9 win at Corrigan Park in 2019. Sideline View;'s group format could see the counties meet in the All-Irelan

With inter-county squads, who prepare extremely diligently, not deemed as 'elite' any more, it saw a new ruling preventing the GAA season – unless there is a u-turn - to begin until at least Easter.

It is a major kick in the teeth for players who have that serious desire to pit themselves against the best the rest of Ireland has to offer, tuning their bodies to perfection in the process.

While I do think the level of preparation for the inter-county game has reached an unsustainable level, this decision is a major insult to county players. It is the choice of word. The stipulation for a return to action should be for professional sport, not elite.

Do the top GAA players really prepare that much differently to the those earning a small fortune in the professional game? I say no. The difference is, the GAA star still has to work for a living and won't be able to self isolate in hotel rooms between games and training sessions.

Now that the ruling has put the inter-county season back, the argument rages between shoehorning the club season into the void now until crowds are allowed to return before starting the inter-county league and championship.

For me, the club championship season should stay were it has been used to, after the inter-county is over. A flipped version of 2020.

Derry CCC had the prefect solution to the Covid-19 crisis, with a 12-week window allowing their championship to be run off in a group stages format that guaranteed club players four games with their county players all on board.

For this season, the junior championship need to have the groups seeded to avoid the group of death – containing five of the six strongest teams - that ended up with Drum, finalists the year before, as the only team in the county not to have a knock-out game.

The underage championships need to be properly graded and if Covid-19 is still with us, we cannot have a repeat of packed grounds with no social distancing. Aside from these three factors, Derry's was the model club championship.

If the club season were to begin on the weekend of August 16, the 12 weeks would still allow five weeks before Christmas to get the provincial championships to be played, with perhaps the finals and the All-Ireland series to be finished in 2022.

To ease the fixture congestion, counties with the teams winning football and hurling titles – like Slaughtneil in 2020 – are exempt from the football preliminary round if the schedule is too tight to accommodate the codes before Christmas.

So where does that leave the inter-county season? I think we'd be better to forget about the league. At most, it was giving counties four games, which would be creep to five with a knock-out championship.

The GAA had a chance last year, with Covid-19 forcing a drastic change, to go for an open draw in the championship. I'm thinking back to 1984 and the Centenary Cup, played on a knock-out basis, Derry beat Cork in Ballinascreen, before needing extra time to see off Kerry in Tuam and eventually lost to Monaghan in the semi-final. It made for novel pairings.

This season, with no room for league and championship, the GAA only really have one viable option.

Bin the league, keep the provincial championships and play the All-Ireland off in a group format. Cavan and Tipperary, quite rightly, have the chance to defend their titles. It gives Cork, Donegal and Tyrone a chance to avenge their early exit from last year.

Dublin should be kept out of the Leinster preliminary round, for no other reason than to avoid some poor side taking a needless pasting.

In Ulster, the teams due to be in the top division in 2021 – Tyrone, Donegal, Armagh and Monaghan - are excluded from the preliminary round as a reward for making the top flight.

The inter-county season could begin on the weekend of May 9, which allows five weeks of preparation after a potential Easter return to play. It is tight, but built into a 15-week window of inter-county action there would three 'catch-up' weeks in case Covid kicks in. Or they could be dotted in as rest weeks.

Week 15 of the inter-county season is the All-Ireland replay weekend, which is followed by a free weekend before club season.

In terms of hurling, the various championships – Liam McCarthy, Joe McDonagh, Christy Ring, Nicky Rackard and Lory Meagher – would be played in the group stages.

The Munster and Leinster (and a return of the Ulster championship) would be knock-out.

Alongside it all would be inter-county minor and U20 championships, played on a knock-out basis with the only back door option handed to teams beaten in a provincial final.

It would leave the quandary of the availability of U20 players to senior panels. To take any decision out of managers or players' court, the GAA should take a vote across all 32 counties. This would set the law for the season.

It would rob someone like Ethan Doherty from a chance to play for both teams, but if it is consistent across the country, it is someone we will have to roll with.

It is all very tight, but abnormal times dictate us to have measures that sit outside the box.

County Boards, if Covid-19 numbers allow it, could run club district competitions – without county players - between July 18 and the beginning of the club championship to allow clubs to ease themselves back in.

The 'Champions League' format – eight groups of four (shown below) - would give all counties a chance to challenge for the Sam Maguire, with the bottom two teams in the groups going into the second tier Tailteann Cup.

The groups would be seeded from the league placings at the end of 2020 and would replace what the league was going of offer this season.

The games – one home, away and neutral - could be separated over the weekend to allow for television coverage between all channels, with the exception of round three of the group stages being played at the same time. It would make for excitement of tuning into the radio or social media to check how other games could affect permutations.

When I think back to Derry's roller-coaster qualifier game in 2017 down in Castlebar, what they had Mayo on the ropes. These are the types of games that would add an interesting dimension to the county scene.

Last season the GAA had a chance to do something different. Now it's time to embrace change and shuffle the deck.

All-Ireland groups, based on 2020 league placings.