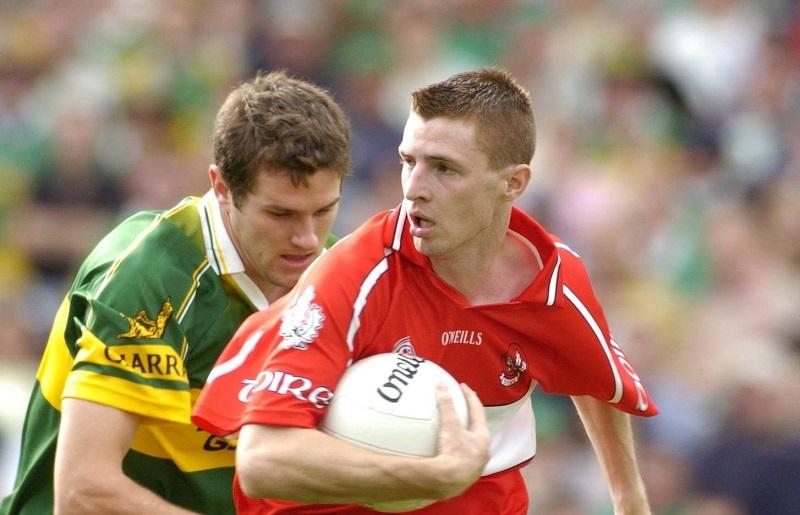 Former All-Ireland minor winning captain Gerard O'Kane feels his experience at club level was a huge help in preparing him for his inter-county senior career.

In an feature interview in this week's County Derry Post, the Glenullin man – who also captained St Patrick's Maghera to MacRory and Hogan Cup glory – looks back on 2002 and the county's last of their four All-Ireland minor wins.

O'Kane made his debut, under Mickey Moran, in a NFL league clash with Waterford at Ballinascreen in 2004, with his first championship coming later in the season against Wicklow in Round 1 of the qualifiers as Derry went all the way to the All-Ireland semi-final where they lost to eventual champions Kerry.

His last outing was a substitute appearance, replacing Kevin Johnston, in Derry's 2016 Ulster SFC defeat to Tyrone at Celtic Park under Damian Barton.

“All our boys (2002 minors) were playing club senior football,” O'Kane points out.

“I got called into the squad towards the end of 2003 and I still had a year of school to do at that stage. It didn't suit and I remember Dublin ending Derry's summer down in Clones.

“I remember Mickey and Harry Joe (McWilliams) calling me in for a ween of training games and with my A-Levels, it just didn't suit.

“I came in the following year and I was still only 18, but by that time I had three years of senior club championship football, at first division (level) during my minor days.”

“I think you need that two or three years playing senior club football,” he states.

“Nowadays their senior club career only begins at 18 or 19 and if you give them two or three years it would mean they are not ready for county senior until they are 21 or 22, then so be it.”

After Derry's 2002 All-Ireland success, it took 13 years for the county to win an Ulster minor title. Conor Glass was the next winning captain and O'Kane feels he needs to be given time to grow into round ball game after five seasons with Hawthorn and that 'a lot of pressure' has being put on the Glen man's shoulders.

“He needs to find his feet in that (club) environment. I had three years behind me. I remember marking Paul Young, Enda Gormley and Glenullin beat Bellaghy. I was marking Joe Cassidy, who was a Derry senior at that time,” O'Kane points out.

“I know fellas are being plucked from minor squads into senior squads as a development pathway, but there is no better pathway than playing club senior football regularly.

“You have to impress at club senior level, before you play county and I don't know that it is happening at the minute.”

O'Kane continued by saying that while it 'might sound harsh', players are being picked because 'so much time' has been invested in them through development squads.

“The same boys might not play senior football for their club regularly, yet they are in and around a county senior squad.

“If you take an American tourist, it's quite simplistic, and took them a club senior game in Derry and ask him to pick out the county senior players, he should be able to do it.”

On the night O'Kane and his teammates took the Tom Markham Cup back to Maghera in 2002, he made a 'grand statement' that a senior title would follow in 'six or seven' years.

“I remember standing in Maghera – and I cringe looking back on it,” he recalls. “It just wasn't going to happen like that. I didn't know that as a 17 year-old, but once I stepped into the environment I realised its not that easy.”

The former Derry defender does see the county's stock rising. In his role with Queens' he has been taking a wide look across underage in Ulster in recent time.

“Now one of the first questions I am always asking is 'what is Derry like this year'?” he admits.

“For years, it was Tyrone and Cavan, but Derry are now seen as one of the teams that people in Ulster are looking to straight away and I'm sure Derry minors would've given it a good push this year.

“That Lavey team is one of the best minor teams I have seen, I saw them playing Glenullin and winning Ulster last year, and you take the other (Derry club) teams in around them.”