SIDELINE VIEW: Can I kick it?

Underage coaches need to set targets for their players 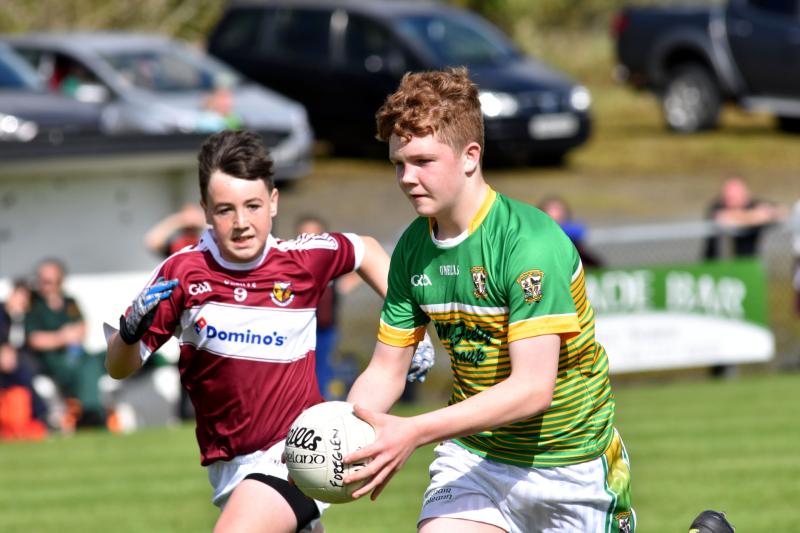 Action from Foreglen's U14 final win over Banagher in 2018 (Pic: Mary K Burke)

Leafing through Derry's new coaching proposals in recent weeks, the section on 'Go Games and participation' will no doubt have struck a chord with many underage coaches.

With AGMs dominating the landscape at the minute, clubs will break away into their various underage committees to appoint coaches for their various squads.

The senior team is the flagship team, attracting the best and most high-profile coaches. It is only the tip of the iceberg. While the senior group inspires - at least it should - the club's future, without what happens below it simply won't be there.

When Sean McGoldrick tossed a ball to his son Barry, who was still in primary school all those years ago, he opted to chest it back rather than catch it. The penny dropped to Sean. Coleraine needed to build a GAA tradition from scratch, with a conveyor belt that delivered two senior championships.

Underage should promote enjoyment, be a vehicle to improve physical and mental fitness and develop players that can be handed over with a full set of tools to make a stab at being a senior player.

Winning trophies should be a very definite focus, but not above or at the cost of everything else. Number one target should be to finish the season with the same amount of players that you started with. That's the enjoyment factor, something that only comes from playing games. This is where retention comes from.

Two of the biggest barriers are, first, overbearing parents, who only see their own children in the teams they coach. Not all fall into this category, but some do and everyone else suffers.

Secondly, you have the coach who needs to win underage titles to massage their own ego and give themselves a sense of importance.

For me, the success for an underage coach is hanging over the wire and watching how many of the players under their watch progress to the ranks above. Watching an U14 team playing an attractive brand of football, using all the key skills and doing so with a smile on their faces, that should be enough rewards for those who taught them how to tie their laces and perform a basic pick up at the U8 grade.

This is what Go Games can offer. Participation. Small sided games with loads of touches of the ball. The 'one touch' concept promotes team play and for players to give and go, joining the attack later in the move. It encourages players to always have their head up, looking for the next play.

Though I do feel coaches need to be careful. Time should still be allowed to give the flair time to develop. The player who will take the ball and beat a man. This area of coaching needs to be honed in as well. That's where the management comes into play and have games with certain conditions to allow this.

Last week I watched 'Take the Ball, Pass the Ball' on Prime Video. It was a documentary on Barcelona and the club's values. It centred around Pep Guardiola's golden era, when they wiped the floor with everyone before them.

It showed how a philosophy of football at youth level can mould a club. Some of the stars that came to the club and didn't adapt were soon on their way out. And having the trust to appoint from within, opting for youth coach Guardiola ahead of Jose Mourinho. Perhaps, it is a model clubs could adopt in the GAA, to do away with the constant chopping and changing of managers, but that's another debate.

At the heart of Barcelona was rondo, a basic ball retention game that forces players to play in tight spaces. With an opponent always closing in, achieving a perfect first touch off both feet is the passport to success.

Mickey Moran had a GAA version – 'murderball'. It is what it says on the tin. Move the ball or be murdered. With limited time in possession, and over a period of time, players became comfortable on the ball.

Both scenarios are a better coaching strategy than the line drills, which should only be used for to teach the basic skills. This is where the best coaches need to be placed, 'the best' in terms of how they can break skills down into the key components and teach them. Spot the mistakes and go again. This is real coaching.

How do you judge the standard of this coaching? By setting targets. Imagine the scenario where every player stepping up to the U12 grade is able to kick off either foot or strike the sliotar off both sides.

A coach that could offer this is worth more money than a club could spend in any other avenue.

At the start of the season, make out a small square and stand back 20 metres and see how many kicks out of 10 a player can bounce into that square. Like the one bounce ball the senior player would want in the closing stages of a county final, when the heat is on.

Give each player a score off each foot and complete the exercise at the end of the season. Do both tests inside a hall, to ensure that weather doesn't impact any comparison of scores. For hurling and camogie, use black tape to make a square on the wall of the hall.

If a player gets the full 10, then increase the distance for the end of year test. Better still, get them to sidestep a tackle bag first so that they have something to beat. As the wheelie bin challenges during lockdown proved, children are competitive at everything they do.

Video them and show them ways to improve their technique. A player who can get a four out of ten up to a 10 on their strong side and a zero with their weak side up to a five would have some indication of where they are. The club's ball wall would then be thriving with people wanting to get better.

Once this approach is properly in place, the murderball and rondo can kick in. Use the pass and move approach to link into playing that one killer pass to unlock a defence.

Surely, any club would want this.