Derry minors chomping at the bit for their chance to compete 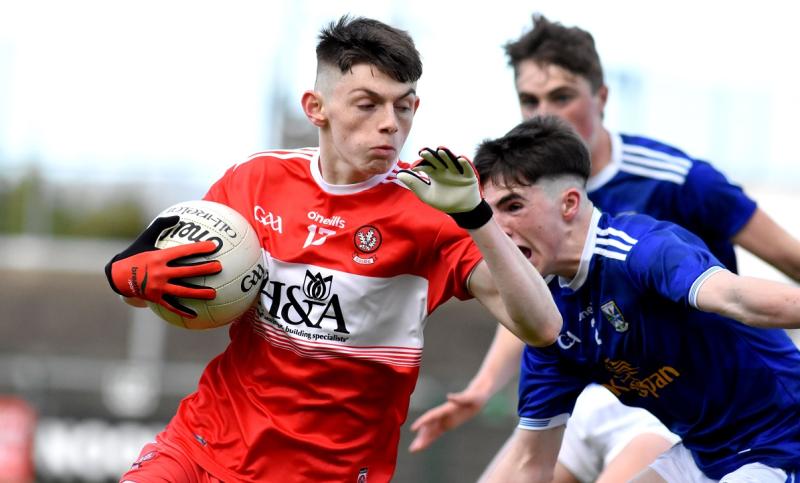 Derry captain Matthew Downey in action against Cavan in the 2019 clash with Cavan at Owenbeg (Pic: Mary K Burke)

Derry minor manager Martin Boyle said the management have been energised by a squad of players who are chomping at the bit to get their slice of the championship action.

The Oakleafers host Armagh this weekend in a repeat of last year's clash. Lee Brady, Donncha Gilmore, Calum Downey, Matthew Downey, Charlie Diamond and Adam McGonigle remain from Derry's 1-5 to 0-4 win, thanks to a goal from PJ McAleese.

Gilmore won't be part of Derry's plans, after sustaining a serious knee injury earlier in the season.

Thanks to four points from Lachlan Murray, three Charlie Diamond points and a penalty save from goalkeeper Kian McGonigle, this year's Derry crop were winners over Monaghan in horrendous conditions in Clones in the league opener in February.

With a depleted squad, due to St Patrick's Maghera's involvement in the Paul McGirr semi-final, Derry lost to Down in the only other game played before lockdown.

In recent weeks they have played training games, but – like the other seven teams – go into the unknown this weekend. Only Monaghan's preliminary round win over Cavan made the cut when the championship began in October, before it was once again closed down.

Sunday's opponents Armagh also beat the Farney county in the league, after losing their opener to Antrim (2-6 to 0-10).

From last year's team Michael McConville is underage and was selected as captain by manager Ciaran McKeever. Midfielder James Walsh also started in 2019, while Adam Garvey and Niall Dummigan – who came on as substitutes – are full back and centre back respectively.

The early league games feel almost like a different season entirely and Martin Boyle admitted Derry's management doubted if a ball would be kicked again this year.

Boyle leads a management team that includes Darren McShane, Diarmuid Scullion and Stephen McGuigan. They have been ratified for next season, with one change – James McNicholl moves up from the U16 squad to take the place of Scullion who has opted out for 2021.

In October and November, the players were going to leisure centres to follow gym programmes and getting their running done on their own at club pitches in the dark.

“It was really tough on the lads, but not once did they show it, not once,” Boyle stressed, in no uncertain terms.

“When we were able to get together in pods, we had parents driving around the county to the different venues. You really appreciate that and you felt the GAA needed to make a decision, when you look at how many people are implicated by this.

“But there was never anything but positivity from the lads and we got great energy from their attitude and appetite. It never waned once, which was remarkable.”

“I just know that these boys want their opportunity to compete. They have been desperate to play this year and they have committed so much to the training regime.”

Such was the drive for work in the squad, the management was caught 'between two stools' of balancing the desire with rest, while factoring in their studies with the lingering thought of the season being pulled from under them.

“We made a decision to take a break and it was the best thing that happened,” outlined Boyle. “There are a number of these boys and it was a good opportunity to tell them to rest. They got out of training for two or three weeks and it has helped them. They didn't want to...but they were told.”

Oisin Quinn has been responsible for their strength and conditioning programme, but new senior conditioning coach Peter Hughes – who helped Derry beat Tyrone in a minor final during his playing days – oversaw any injury rehab.

“We resumed back into training last week and it's all good,” Boyle added.

Derry are going to have to plan without Dara McGonigle (fractured wrist), while Darragh Wade's medial ligament injury could keep him out until at least a semi-final, should Derry advance. Joel Lynn (groin) and Ryan McEldowney (hip) are also on the sidelines.

Initiually, there was been better news with Niall McGonigle' progress from a back injury, but a hamstring injury on Saturday makes him a doubt for Sunday.

Calum Downey got an MRI scan on a groin injury that he had been managing during Lavey's run to the minor title and is now going through a period of rehab.

“You have to balance playing against his rehab,” Boyle points out.

“We have told him there is no pressure from us (to play). There is chat of MacRory after Christmas and then the U20s. I could be selfish and say you are playing...which he will (want to) do.

“You have to look at the bigger picture, they are 17 year-olds and they hopefully have another 10 or 12 years playing for Derry. As Derry men, that's what we all want.”

Boyle was with the development squads 10 years ago, before getting involved again last season. He has noticed both 'unity' and 'togetherness' coming back into the county scene.

“The players are there and these lads...they want to play for Derry. The energy they have consistently given us at training and the quality they produce, all you want for them is this opportunity to produce on the big stage and show their worth in a Derry jersey, which they take serious pride in.”

In October, Covid-19 ravaged his squad, on top of the bumps and bruises of club action. Speaking last week, only one member of the panel was isolating due to being a close contact.

Without the usual level of footage from minor league games, there isn't the same chance to suss out opponents and factor in match-ups.

“You are going in blind, but for lads of that age, it was a competition that was nearly gone. It's a case of...get out, throw in the ball and let them play football.

“Let's go and give it a rattle. There are numerous good teams in Ulster,” he concludes.

“There is plenty of quality (in the Derry squad). If we get a bit of luck with injury and the bounce of the ball, who knows.”