Intermediate championship team of the season 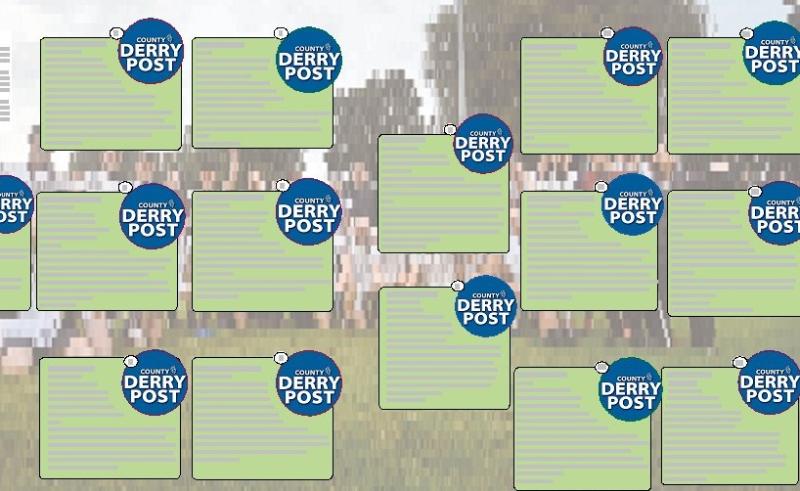 Before a ball was kicked, Greenlough were hotly fancied to pick up their fourth intermediate title.

Winning all six games, they did just that.

It took a late intervention from goalkeeper Kevin Mullan and a winning point from Enda McNally to snatch victory in a pulsating conclusion to their semi-final with Castledawson.

Steelstown still await their first title, after failing to capitalise on a quick-fire start to the second half in the final.

One of the stories of the campaign was Lissan, back-boned by youth, chinning Glenullin in the qualifying round.

Injuries derailed the 'Dawson when it mattered most, Drumsurn were blitzed in the first 10 minutes of their quarter-final with Steelstown and Faughanvale boss Joe Gray will spend the winter pondering how close his side are to glory.

An intriguing championship all round.

1 – Aidan McLaughlin
(Castledawson)
The consistent McLaughlin edges out Marty Dunne for the number one spot.
Made a breathtaking save against Greenlough in the group stages, organised his defence well and was confident under the high ball.
A fine double save against Glack was backed up with a similar feat on the rebound of Enda Lynn's semi-final penalty.
The variation on his kick-outs helped the 'Dawson comeback and they almost made the final.
[First all-star]

2 – Eoghan Concannon
(Steelstown)
Concannon mopped up breaking ball in the early stages of the Glenullin game and grew as the championship developed.
He got forward to support the attack. It was his fine delivery that put Cahir McMonagle in for the all-important goal against Faughanvale.
Had a terrific battle with Enda Lynn in the final and an interception that prevented a goal, looked like turning the game for Steelstown.
[First all-star]

3 – Gordon Fahey
(Faughanvale)
Like the rest of the back four, it was a first award for Fahey who battled his way back from a series of serious injuries.
Fahey always played close to goal, was strong in the tackle and gave Michael Sweeney the freedom to attack.
He blotted out Cormac Quigley in their win over Limavady and put in a good shift on Mark Foley in the semi-final.
[First all-star]

4 – Paul Quinn
(Greenlough)
'Rooney' continues to be the epitome of consistency in the Greenlough defence.
He held 'Dawson dangerman Conor Taggart scoreless from play in the group stages and kept a tight eye on Aidan Keenan in the semi-final, while still getting forward to support midfield.
He got caught on the wrong side of McMonagle for his goal in the final, but defended strongly for the rest of the game.
[First all-star]

5 – Brian McCallion
(Greenlough)
McCallion is Mr Versatile and always there when he is needed. The fact that he edges Niall Loughlin for player of the year says enough.
His turnover led to Loughlin's goal against Castledawson in the semi-final, in game in which he kicked two points.
While he was hardly able to walk off the pitch, he played a seismic part in Greenlough's second half turnaround in the final six days later. A brilliant player.
[Third all-star - INTERMEDIATE PLAYER OF THE YEAR]

6 – Neil Forester
(Steelstown)
If there is a God, 'Fo' will pick up a championship medal before he hangs up his boots. What a warrior.
Held the middle more than usual and was an option on kick-outs , but any time he went on the attack, the opposition were always on the back foot.
As the 'Vale closed in on them in the semi-final, he bombed forward to push his side to the final.
[Fourth all-star]

7 – Connor Mullan
(Greenlough)
In Greenlough's counter-attacking system, Mullan was terrific. He used his pace to great effect and when his established team mates were wasteful in the semi-final, he kicked Greenlough's first point.
He tied up Gareth Logue in the final who was replaced early in the second half.
The fact that Christopher Kearney, a tough omission, misses out on the team, says a lot for the impact Mullan made.
[First all-star]

8 – Enda McNally
(Greenlough)
With 3-6 from midfield, McNally's athleticism was an important cog in their run to the title.
When Castledawson's Luke Doyle started to cause bother on kick-outs in the group game, he moved out on him to help Greenlough get a grip.
His goal in the semi-final was a cracker, matched by his winning point and a fine effort against Steelstown in the final.
[First all-star]

9 – Luke Doyle
(Castledawson)
Doyle had a fine season in the 'Dawson midfield and was crisp in possession.
He started with 1-2 in the first game and was always a target for Aidan McLaughlin's kick-outs.
When he began to play more centrally in the semi-final, it helped his side back into contention.
His palmed goal started the comeback that almost saw them clinch a final spot.
Gets the nod ahead of Niall Bradley.
[First all-star]

10 – Eoin McElhinney
(Faughanvale)
Since coming onto the scene, McElhinney has been one of the 'Vale's most consistent performers and this season was no different.
Had a fine game in their win over Drumsurn in the group stages, he blitzed Limavady with his running in the quarter-final and nicked a goal.
He handled plenty of ball in the semi-final when Faughanvale needed him.
Cathal O'Kane was also in the mix for selection.
[First all-star]

11- Mickey McKinney
(Steelstown)
Began his career as a defender, but he was a calming head in the middle third of Steelstown's match to the final.
He came on as a sub against Glenullin, was influential in their win over Limavady and man of the match against Drumsurn.
Played the role of play-maker in the semi-final and it was his pass that put McMonagle in for his goal in the final.
[First all-star]

12 – Enda Lynn
(Greenlough)
'Berg' picks up a seventh award, including inclusion in the 2017 senior selection.
Was kept wrapped up in cotton wool until it mattered. He looked like he was never away in his performance against Lissan.
His mesmerising run led toEnda McNally's goal against Castledawson and his use of the ball in the final was something Steelstown missed.
Made the side ahead of Ben McCarron, who had a fine outing against Drumsurn.
[Seventh all-star]

13 – Cahir McMonagle
(Steelstown)
A fresh addition to the Steelstown side. He teased Glenullin after a substitute appearance in the first round and was soon the fulcrum of Eamon Gibson's attack.
He was nimble on his feet and proved an excellent ball winner.
After bagging 0-3 against Drumsurn, his cracking goal was effectively the difference in a tight semi-final.
It was bettered by his strike in the final.
Gets the nod ahead of Faughanvale's Paddy O'Kane.
[First all-star]

14 – Niall Loughlin
(Greenlough)
He terrorised defences on Greenlough's route to their last title in 2015 and he did it again.
Latched onto Stephen Bradley's pass to hammer home a goal against Slaughtmanus and blasted one to the net in both their clashes with Castledawson.
The weather for the final could be described as terrible at best, but Loughlin still put in an exhibition of scoring, the hallmark of any great forward.
[Third all-star]

15 – Tiarnán McHugh
(Drumsurn)
He was named on last year's hurling selection, but after a fine season he picked up a first football award.
It was his versatility that made him all the more effective, playing as an inside forward or an extra option for goalkeeper Harbinson when he pulled to the wing.
He plucked kick-outs for fun in their narrow defeat to Faughanvale early on, before putting in his best season in the Drumsurn jersey.
[First all-star]