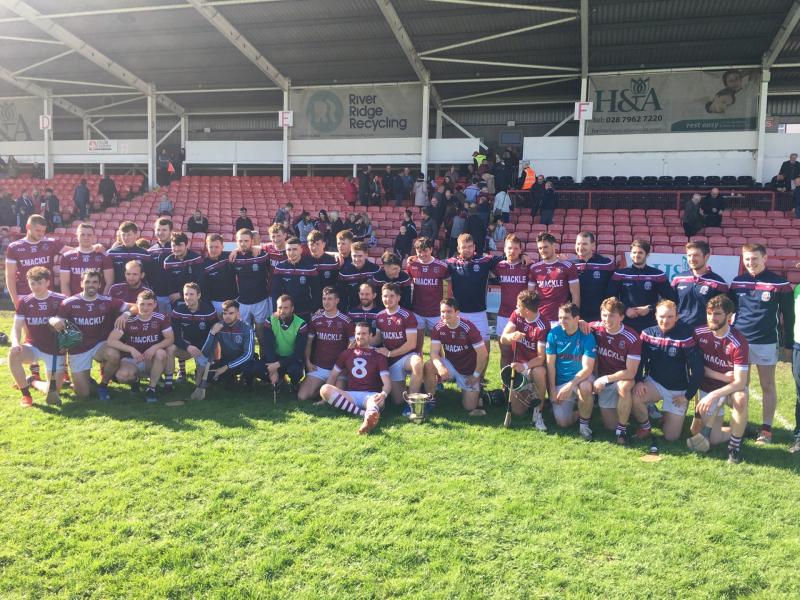 The Slaughtneil squad celebrate eight in a row

It leaves the Dungiven club still searching for their first county senior title since 2011.

Slaughtneil made one late change with minor player Shea Cassidy handed his debut, at the expense of Jerome McGuigan.

With the wind at their back, Kevin Lynch's had the dream start with a Niall Ferris point after 26 seconds.

Slaughtneil had Shane McGuigan back on Tiarnán McHugh, Paul McNeill went out to pick up Niall Ferris and Sean Cassidy switched to wing back against Kevin Hinphey.

Gerald Bradley replied with a sweet score, but Seán Kelly's long puck-outs had Kevin Lynch's on the attack and three Eoghan Cassidy frees had them 0-4 to 0-1 ahead. Ciaran Steele passed to Cassidy for a point from play and it was all Lynch's.

Shea Cassidy made the score 0-6 to 0-2 just before the water break. It broke the momentum Geoffrey McGonigle's side had.

Gerard Bradley moved back as sweeper and Slaughtneil began to get a grip of their puck-outs. A 25th run from Brendan Rogers, after he won the puck-out and linked with Brian Cassidy, as the first real Slaughtneil spark.

Cormac O'Doherty began to shape the game with diagonal balls and his fourth free of the half put them ahead for the first time in the game after 28 minutes, before Darragh McGilligan levelled matters at the break.

Ferris hit the first two scores of the second half, but frees from Slaughtneil skipper Cormac O'Doherty saw the teams tied for the final time, after 40 minutes.

It could've been more only for a full-length Seán Kelly save to deny Brendan Rogers a 47th minute goal.

In the final quarter, Jerome McGuigan came off the bench to add two points as Slaughtneil cruised clear.