OPINION: Forget club versus county and split the seasons 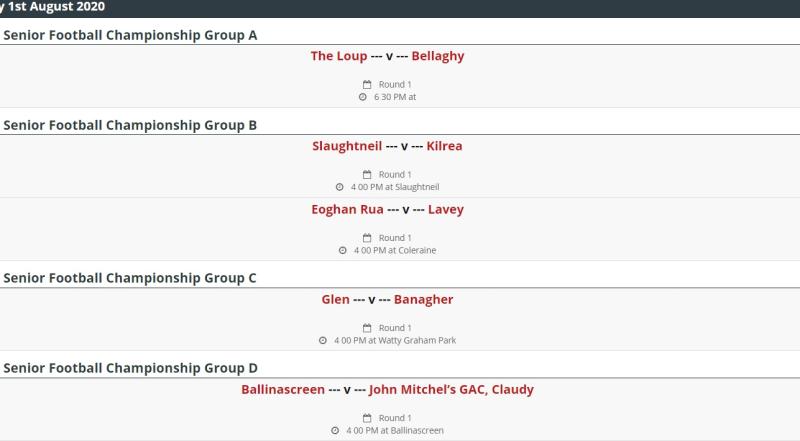 Club versus county. County versus club. For the first time, it has been county managers who have had sit back and wait for their slice of the pie.

If one thing comes out of 2020, let it be the concept of a split season finding its way to the committee tables of the land. A format that would allow county and club to have their own dedicated slots.

It has to be worth consideration. Even the fact that Derry selector Ciaran Meenagh has been on the sideline of his native Loughmacrory, captain Chrissy McKaigue and manager Rory Gallagher have been coaching Desertmartin and Killybegs respectively tells you there is room for both.

The GAA made a terrific call in blocking counties from training and allowing players to be exclusively with their club. I could see some mileage in allowing them to report to the county setup once a week to assess fitness and liaise with the physios. But give an inch and counties could take a mile. It would be difficult to police.

Slaughtneil's three codes are all training with GPS trackers to assess their training. With almost all counties having access to this level of technology, managers can assess their fitness remotely, unless a players chooses to strap it to a greyhound for a night and cheat the system.

It's the county physio that would find it difficult, keeping a handle on injuries and rehab. Perhaps the GAA could made an exception for injured players to see the county medical team or at least open a communication channel with the club physiotherapist. We have to learn to trust professionals to do their job.

The one own goal the GAA made was to make a one size fits all approach. They would need to tweak their ruling to allow players back to county duty once their club has finished. It's only fair and make a ruling that hands a ban to any county manager and chairman if found guilty of impinging on club season.

However, going forward, I feel that county should come first and get it all finished up in the first half of the year, followed by a club season.

Go back to the old system of the back door, before the Super 8s. Barring a few counties who have been cannon fodder in the opening round of the qualifiers, it has worked. Look at the progress that can be made. Baker Bradley had his Antrim side competitive against Kerry in 2009 and only for Conor Loftus Damian Barton would've steered Derry to an upset against Mayo.

But squeeze the county season and take down the training to games ratio, to maximise everyone's time. And during the NFL and NHL, counties – with their leagues detached from championship gradings - can run their club programme regardless, with games on a Saturday evening. It would leave Sunday free for club members to attend county games.

A small select number of club weeks in the first half of the club season should allow county players to play a game or two for their club, on approval of the county physio. Players who are outside the county manager's current plans should be available to their club, on an ongoing basis, to help with their match sharpness.

The player has to benefit after all. If he isn't used for the county one week not selected in the starting 15 for the following round of the league, he should be available to play for the club on the Saturday and be ready for county action on Sunday if needed.

At the end of the day, chances are they are only going to be playing for the last 10 or 15 minutes and match sharpness is more important. Again, there needs to be a degree of compromise, trust and a degree of dialogue with medical teams.

In the long run, it would prevent players leaving county panels if they were not getting a look in. This would be a terrific fit for a county like Derry, where people are always chirping in players ears if they are not getting regular time...'jack it in and come back to the club' they'll be told.

The difficulty is an outside manager in a club, if he has no genuine long-term attachment to players' development. They will been brought in with one goal, win a championship. Uniting club and county rifts won't be on the radar.

The other advantage of a split season, would be the club players would have the opportunity to travel and go on holidays during the league, without the guilt of their club ending up dropping into the intermediate or junior championship. As John Brennan was reported as saying, leagues and for playing in.

This type of environment would be a welcome boost for a skinny and talented lad in his first year out of minor, who could get some senior experience without the cut throat nature of promotion or relegation. Imagine what five or six successive games would do for his development. It would certainly help the drop out rate. All players want to do is play after all.

Hey presto, by the time the championship comes around a club manager would have more options to select from. There would be bigger numbers at training, enough for a full game which would feed the competitive edge even more.

From a Derry point of view, the split season would be brilliant. If county games were properly staggered, it would even allow the possibility of Chrissy McKaigue, Eamonn McGill and Brendan Rogers to feature on both squads.

Perhaps, this is all a bit romantic and a result of months of craving the return to the good old days of going to games week after week. It has to worth a go. The current system is not working.

If I had one wish, I would wish for this season's structure to be flipped (county first, followed by club) and retained for 2021. If we can say goodbye to Covid-19, it would give us something to properly judge. After all, the GAA are constantly rehashing meaningless rules. Why not be radical and try this one. The worst thing that can happen is that it will fail.

If it does, we can throw it on the scrapheap and return to the constant club versus county battle.