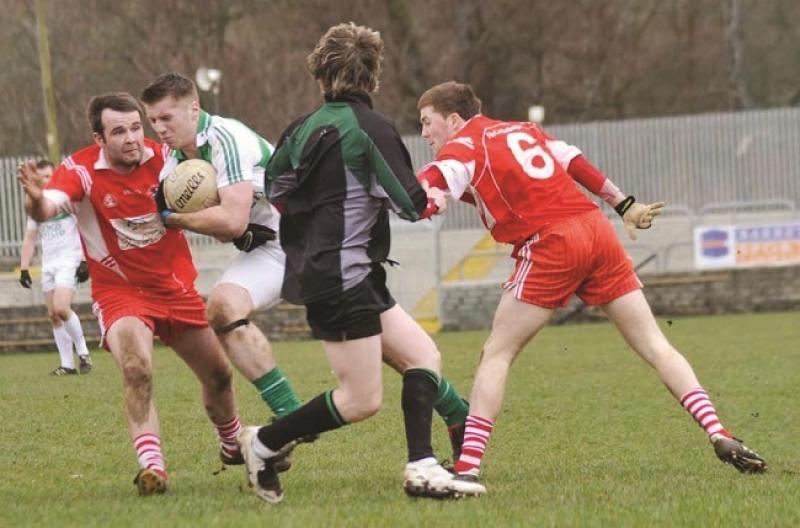 Minus the suspended duo of Cathal O’Kane and Fergal Moore, it was always going to be an uphill task for the Derry side, who hadn’t lost since their defeat to Newtownstewart in the first game at the start of March.

But against the strong breeze in the first half, they failed to score and Killybegs racked up seven first half points to give them a handsome lead going in at the break.

Killybegs were quickest out of the blocks with Conal Molloy bagging a brace inside the opening ten minutes. Ciaran Tully then hooked over a huge effort from outside the forty to increase the difference out to three.

Conal Molloy then grabbed his third of the day from a free two minutes shy of the quarter hour mark. However, all that endeavour was nearly undone in one fell swoop. Lee Moore somehow managed to wriggle through at the town end, but found Killybegs netminder Anthony O’Hara equal to the task.
Senior panellist Shane Boyle then strolled up from centre-half-back to split the posts and make it 0-5 to 0-0 with eight minutes of the first half remaining. And during the remainder, the impressive Ciaran Tully drilled over another two points to make it a seven point game.

Concerns expressed by Manus Boyle during the half time interval as to whether his side had done enough, looked to be genuine, when Craigbane pegged on four quick-fire scores inside the opening ten minutes of the new half to cut the deficit to just three points.
Lee Moore got the salvage operation under way before number eleven Gavin Conwell dissected the posts from distance with two fine frees and one point from play.
Killybegs responded and defenders Ronan Boyle and David Conwell started to open their legs to give then zip on the flanks.

Man-of-the-match Ciaran Tully drove at the Craigbane defence to send Conal Molloy through to post, before firing over his fourth of the day just after the third quarter.
And fittingly it was veteran Mark Boyle who finished the scoring for the victors after he had linked up superbly with Pauric Gallagher and Ciaran Tully.

With the result well and truly in the bag; the Donegal side took their foot of the gas and that allowed Craigbane to fire over a late consolation point through a Moore free.