Another meeting of two rivals of Ulster Schools' football 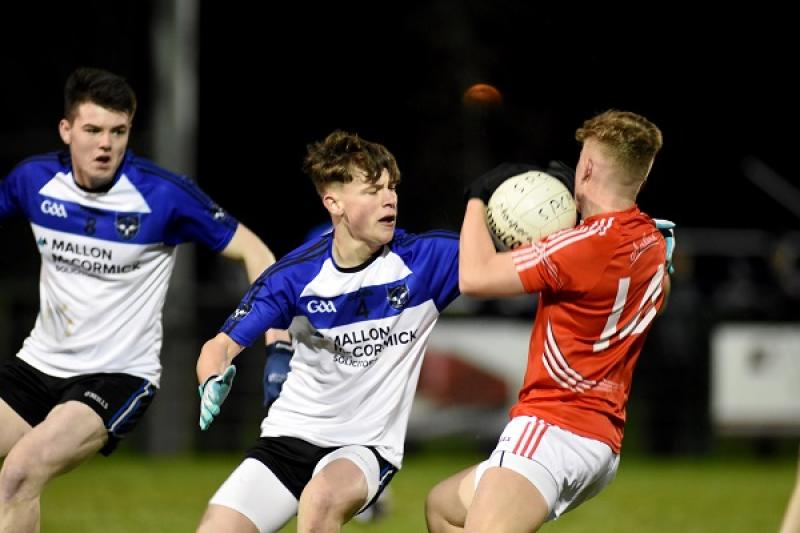 MacRORY CUP SEMI-FINAL (U19 A FOOTBALL)

Sean Marty Lockhart bills St Patrick's Maghera's semi-final clash with their Dungannon namesakes a '50-50' game, as they aim to make another step towards lifting the MacRory Cup for the first time since 2016.

On their way to the title four seasons ago. Maghera overcame Dungannon in a gripping semi-final and last year they were comfortable winners (1-10 to 0-4) over them, before bowing out to eventual Hogan champions Enniskillen in the last four.

Like Maghera, the 'Academy' topped their group before bowing out in the semi-finals of the McCormick Cup.

Lockhart, who is part of a management team that includes Paul Hughes and Martin McConnell, watched their opponents overcome St Mary's Magherafelt and was impressed with what he saw.

“We got a good look at them. They are a very good side, St Patrick's Dungannon are a pedigree MacRory side and it's going to be a 50-50 game, that's the bottom line,” Lockhart said after Maghera's win over Holy Trinity.

Former Maghera player Eunan Quinn's point levelled the game at 1-8, with Magherafelt sensing that a third consecutive knock-out win was on the cards. Following a harsh red card for Aidan McCluskey, the tie changed and Dungannon, who were slicker in attack, ran out runners.

“The Convent had a man sent off and it was definitely the big point in the game,” Lockhart recalls. “If Aidan, their best player, had stayed on it definitely could've been a different outcome.

“St Patrick's Dungannon have quality players throughout their team and they will cause us serious problems but we're there and we'll give it a rattle.”

Eglish's Luke Donnelly is one player Maghera will need to plan for. While Ronan McFaul was carrying out an expert marking job on Daniel Fullerton in last year's Ulster minor championship, secret weapon Donnelly took Derry by surprise and his 1-6 salvo downed the Oaks.

Donnelly has 7-21 to his name across the five games of this year's MacRory campaign, including 3-2 against Coláistí Inis Eoghain. McFaul will more than likely be tasked with putting the clampers on him.

If Ronan McHugh recovers from the injury that forced him out of the 'Convent' game at half-time, Aaron McGuckin will pick him up.

Dungannon operate with a more conventional attack than Cookstown and if Sean Cowan stays close to goal it will keep Paudie McLaughlin occupied defensively.

In the half-back line, Jamie Duggan could be once again be asked to put out another fire in the form of Scott McCann who has bagged six goals this season. The Lavey man has blotted Conor Love and Oran Mulgrew in important games since the turn of the year. He has a natural instinct to attack and if he does, Enda Downey or Seamus McKenna will need to seamlessly drop in behind him to mind the house.

The switch of Ethan Doherty to midfield and handing him the captain's armband has transformed him from a quiet league series to the team's fulcrum. Alongside team-mate Tiarnan Higgins and the versatile Enda Downey, they are a formidable midfield partnership.

Dungannon's management were in attendance at Loup last week and high on their agenda will be occupying PJ McAleese. Their half forward line will be better equipped to do so. Shane Donnelly and Micheál O'Neill, who scored 0-2 against Magherafelt, give Ciaran Gourley's side height on the flanks.

Seamus McKenna could be asked to combat O'Neill's threat and it could leave McAleese on Shane Donnelly.

In Dungannon's defence, Adam Toner picked up Conhuir Johnston so Dungannon have a decision to make. Do they put him on Sean Kearney after his impressive outing against Holy Trinity? Or, assign Toner to mark Matthew Downey, one of the leading lights at this level.

A feature of Dungannon's play was the amount of ball Paddy Kearney picked up. James McGurk can play anywhere from wing back where he excelled for Lavey minors to centre-forward, a role that saw him dictate the Paul McGirr final in Dromore two seasons ago. He got lost in the translation of Holy Trinity's system but if played in a more conventional playmaker role, he could be the key to making the Maghera engine purr and Kearney will be forced to defend.

Both teams had a long lay-off since their McCormick Cup defeats. Dungannon lost to St Colman's Newry after extra-time, who play St Patrick's Armagh in the second MacRory semi-final, while Maghera were undone by Omagh's Daniel Fullerton.

Lockhart pointed to the 'dogged football' required and was 'very pleased' with the performance that saw them prevail against Holy Trinity, who had two wins under their belts.

“St Patrick's College Maghera are renowned for being full of heart and full of character and we showed that tonight.

“Our January is important because we went down south (for the annual MacRory trip) and that galvanised the team spirit.

“There was a good team spirit and Holy Trinity came at us at different times...and we dug deep. We have had the boys for the last six or seven weeks and they have gelled together well.

“We have a couple of players carrying injuries and it gave them an extra week. So that game was crucial for us.”

Duggan and McFaul were huge additions to a defence that conceded eight goals in their previous two outings but there are question marks elsewhere.

Missing from their squad last week were injured duo Liam Downey (shoulder) and Cahir Higgins (leg). Higgins was a regular all through the competition and scored two goals in their defeat to Omagh and Lockhart referred to his injury as a 'niggle'.

“Hopefully he will be available for the next game. We just couldn't risk him tonight (v Cookstown). We will just work with what we've got. We have a panel of 28 players and we have some good footballers too.”

St Colman's Newry lead the roll of honour with 19 titles. Maghera chase their 16th triumph, are always fancied and will go into this week's showdown with Dungannon as favourites.

Two teams who play a similar brand of football with a recent history of clashes at the business end of the competition will being another bumper crowd to Loup. A classic awaits.

READ ALSO - Players should not be made to choose.  Click here...