Mullan strike proves to be the difference between the sides 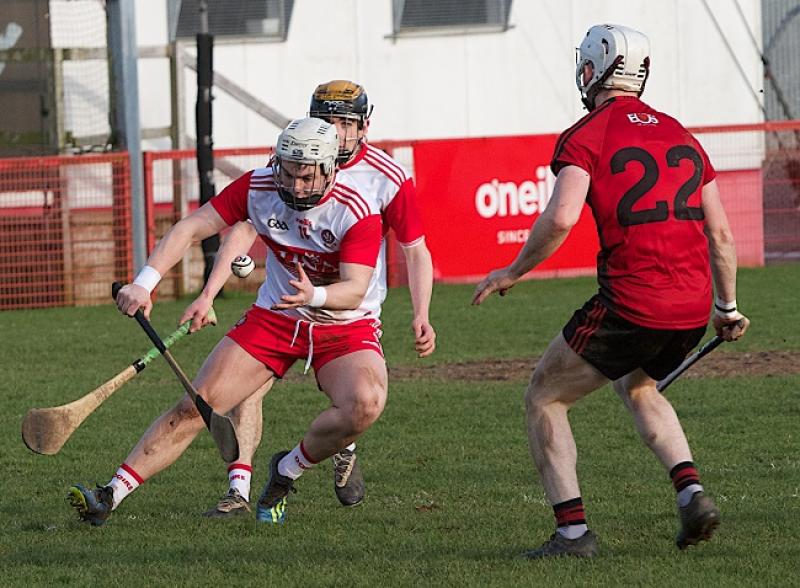 An eighth minute goal from Richie Mullan ended up being the decisive score as Derry got their season off to a winning start against old rivals Down at Celtic Park on Sunday.

It was a carbon copy of last season's opener, in Páirc Esler, when Alan Grant's goal was the difference between the sides.

Cormac O'Doherty was in unerring form from frees, as was his opposite number Oisin McManus. Both landed 13 in all, but it was the Slaughtneil man's two vital strikes when Down were forcing a comeback ensured Derry kept themselves on course for victory.

Former Celtic Challenge winning captain Eoghan Cassidy notched a point on his debut but when the game was in the melting pot late on, he won two vital puck-outs, which will have pleased John McEvoy.

Another plus was the performance of Eamon McGill and Brian Óg McGilligan at the heart of the Derry defence. Noted more as a forward, Darragh Cartin excelled in a new role at corner-back.

Behind Derry's defence, goalkeeper Sean Kelly was their wall. His handling was impeccable and he made a fine save to deny Eoghan Sands.

In the early stages of the first-half, it was a shoot-out between free-takers MacManus and O'Doherty.

But with the breeze at their backs, Sean Kelly's long puck-outs helped shape the game. It had Derry camped in the Down defence for virtually the entire half.

The Kevin Lynch's man took a short puck out and again gaining the return, his long ball evaded Down corner back Darragh Mallon and Richie Mullan, after scuffing his first effort, finished well from an acute angle for a 1-1 to 0-2 lead after eight minutes.

Derry needed Brian Óg McGilligan to intercept from MacManus with a sniff of goal on. Paul Cleary, O'Doherty and Odhrán McKeever (2) added points from play to help John McEvoy's side into a 1-11 to 0-7 interval lead.

Down reshuffled their pack at half-time and began with more purpose. MacManus floated over an early point and Sands had a shot smothered by Eamon McGill, who repelled three attacks in as many minutes.

The visitors, who had a productive pre-season in Leinster's Kehoe Cup, came at Derry strongly in the third quarter.

They could've found the net but when goalkeeper Kelly got his angles spot on, McGill made another block before Paddy Kelly cleared the danger. A goal would've left two points between the sides.

Derry pushed on but Down bounded back. MacManus arrowed three frees in succession and with 15 minutes to go, the margin was cut back to the goal, 1-13 to 0-13.

O'Doherty against answered the call with two points and when Sean Kelly's long free to Jerome McGuigan wasn't cleared, Steafan McCloskey passed to Conor Kelly for an excellent score.

Thomas Brady landed the insurance point before being sent off, one two bookings, during injury time.

The Oakleafers travel to Ruislip to face London next Sunday (2.00). The exiles were defeated (2-26 to 0-20) by Kildare in their opening game.