Derry host Down in league opener 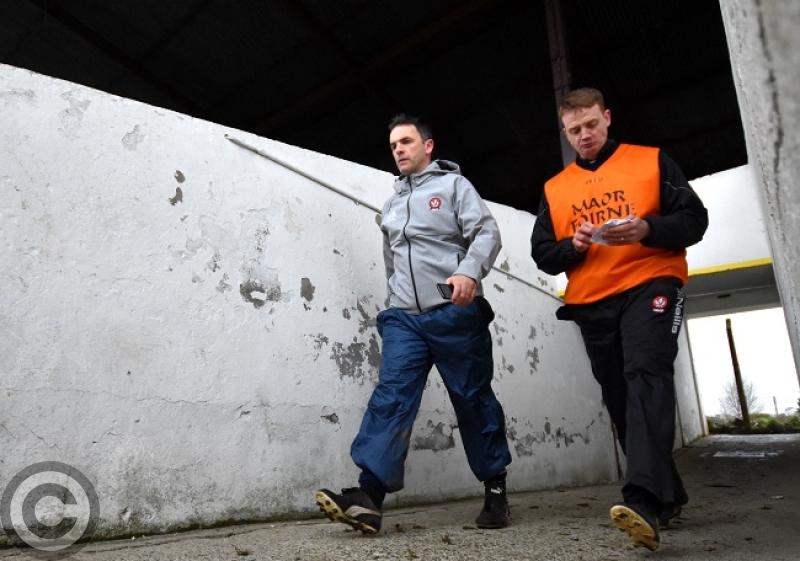 Derry hurling manager John McEvoy is looking to build on the progress made last season ahead of his side's league opener this weekend against Down in Celtic Park.

"We made serious progress last year in terms of the depth of the panel and getting to know the clubs and the players from the get-go, given that we'd a late enough start," said McEvoy.

"It was a good season. We felt we could have gone a bit further but it'll be a work in progress I suppose."

After narrowly missing out on promotion, they went toe-to-toe with championship favourites Meath in the Christy Ring Semi-Final with only the Royals' late goals sealing their passage.

The Oakleafers have been handed home ties for three league games and begin the competition against a familiar foe at Celtic Park.

Derry had the upper hand on Down last year in both the league and the Christy Ring Cup but McEvoy is taking nothing for granted.

"They were going well in the Kehoe Cup and the McGurk cup too but at this stage I would imagine that we know each other well. I don't think there'll going to be any massive surprises so it could be a case of there being a puck of the ball between us."

Down will be without key attacker Daithí Sands, who is on work placement, while Paul Sheehan is unavailable through injury, but the Mourne men will be able to call on Ballycran's Conor Woods.

McEvoy has also refreshed his options for the season with Eoghan Cassidy (Kevin Lync's), Fintan Bradley and Eamon McGill (Lavey) and Steafan McCloskey and Johnny O'Dwyer (Banagher) all joining the panel.

Double Ulster All-Star-winning goalkeeper Leo Passmore of Eoghan Rua, along with Slaughtneil's Jerome McGuigan have also been recruited for the coming year.

McGuigan's clubmate Gerald Bradley will not begin the season with the panel, opting to take a break from inter-county action, while there are a few others who will not be linking up with the squad.

"Gerald is not involved at the moment. He had a great season but between injuries last year and work, he just wanted a break. There are others - John Mullan, Tiarnan McCloskey, Tim Rankin and Brendan Rodgers.  Those were conversations earlier in the year."

Eoghan Rua' Sean Leo McGoldrick also decided against the offer to join the panel after starring in his club's All-Ireland JHC run, but McEvoy is happy with the current squad and the potential impact those coming into the set-up.

"All of those guys will bring something. Steafan was with Derry a few years ago, as was Johnny (O'Dwyer). Eoghan Cassidy has been playing well for Kevin Lynch's, so all of those things bring a new dynamic.

"County panels are changing all the time and you're e basing your panel on fellas that are good enough and can come in. We're happy with the atmosphere there and we're building well."

Three out of their five matches will be home fixtures, but after facing Down this Sunday they face a tough trip to Ruislip where their game against London could be crucial to the promotion race.

Making the trip to Celtic Park in Round 3 are Kildare, a team Derry narrowly defeated in Newbridge during last year's league but who have the potential to make life difficult for the Oakleafers.

McEvoy's men then host Warwickshire before ending their league campaign in Athleague against Roscommon, promoted from Division 3A last season.

Division 2B is tightly contested and with the exception of their rout of Donegal last year, Derry's games were all decided by a margin of 6 points or less. McEvoy feels Slaughtneil's recent heroics will motivate the team in a league where small margins will be vital.

"They had a great run and I felt myself that they were going to get over the line. They were very balanced against Dunloy and I knew that they would perform, they池e a seasoned team.

"I think it will give the Derry team a boost, anyone who was at the county final would know the quality that is there.  I think the club scene is probably a huge bonus for us coming in here and it痴 feeding into a competitive county team."

Having lost to eventual winners Meath last year, Christy Ring success must be on the minds of the Derry hurling fraternity, but McEvoy insists they are looking no further than the weekend.

"To be honest, at the first meeting we had I never mentioned Christy Ring. Later in the summer that will be something we'll look forward to and want to be competitive, but at this moment and time, it's Down and getting through Down.

There is quiet optimism around the Derry camp. After last year's promise and the performances of Eoghan Rua and Slaughtneil on the provincial and All-Ireland stage, John McEvoy will be hoping that heady mix of continuity and confidence can get his side off to a good start on Sunday.

KEY PLAYER
Brian Óg McGilligan – He balanced his time between the county hurling and football panels last season but the talented Banagher man has committed to the hurlers this year.

space in which the Derry forwards can operate freely.

ONE TO WATCH
Jerome McGuigan - Has joined the panel following an outstanding season for Slaughtneil. This is his first year with the county squad but he has the potential to make a big impact on Derry’s campaign.

The powerful full-forward netted the Emmet’s opener against Ballyhale and proved a handful for Kilkenny’s Joey Holden.

FEATURE - Raising the 'Barr -  a look at the progress of St Finbarr's hurling club...