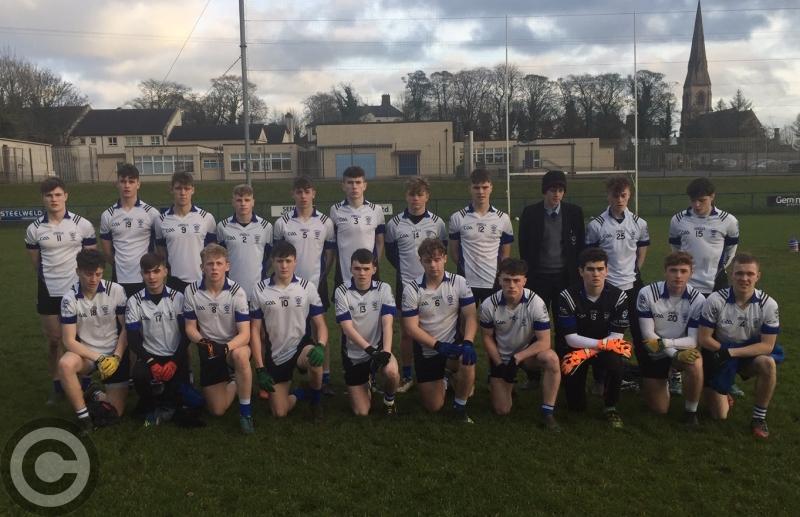 The Maghera squad pictured before their win over Holy Trinity.

With a combined 6-11 from their inside forward line of Sean Kearney, Marc Dixon and Cahir Higgins, Maghera cruised to victory over Cavan in this re-arranged game in Galbally on Wednesday afternoon.

Called off earlier in the campaign due to Mageean Cup hurling and club U21 commitments, this game had to be played before next week's concluding group game with St Eunan's.

Paul Hughes and Sean Marty Lockhart made just one change to their side from their win over Holy Trinity.  Tiarnan Higgins came in at midfield, with Sean O'Neill dropping out and Shea Murray reverting to wing-forward.

The Derry men made an excellent start with Sean Kearney pointing from play and Marc Dixon hitting the net in the opening moments of the game.

Cavan came back with a point but were soon struggling again when PJ McAleese came up from defence to fire between the posts.

Sean Kearney's short free then placed Dixon in for second goal. Cahir Higgins pointed and Cavan were chasing the game at 2-3 to 0-1 with less than 10 minutes on the clock.

Cavan bounced back with 1-5 over the next ten minutes but Maghera still led, 3-5 to 1-6, and a tight second-half looked to be on the cards.

But St Patrick's had other ideas and upped the ante again in last ten for 2-4 without reply - thanks to goals from Kearney and Higgins.

Cavan needed a good start to the second-half but again Maghera set the early pace, grabbing 1-3 without reply in the opening six minutes, with Dixon completing his hat-trick.

The Breffni side had a mountain to climb and when they missed a few scoreable frees the writing was on the wall for them. They did respond with a riposte over the next few minutes but as the third quarter ended the game was well in Maghera's control.

Cavan would manage only one more score as St Patrick's continued to link up their play against a demoralised Cavan rearguard and picked off scores at will over the final quarter.

Kearney scored the final goal of the game from a penalty after he was pulled back while on a tremendous burst through the Cavan defence to cap off a very pleasing afternoon for the Derry school.

Maghera now top the group with two wins from two outings and a win over St Eunan's Letterkenny would guarantee a McCormick cup semi-final place and passage directly to the MacRory Cup quarter-finals.