Holders into quarter-final against Cootehill 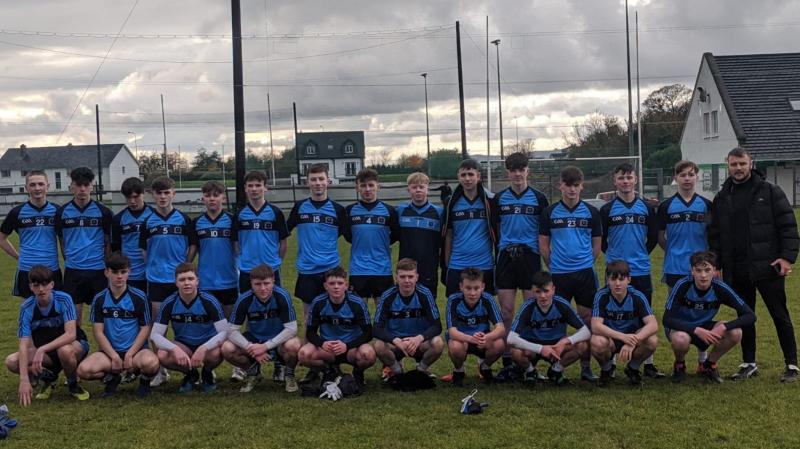 Holders St Patrick's & St Brigid's Claudy advanced to the quarter-finals of the Pat King Cup (U16.5 'D') with a play-off win over St Patrick's Dungannon on Monday in Magherafelt.

It took extra time, but their 2-16 to 1-15 win takes them to a quarter-final meeting with St Aidan's Cootehil.

Dungannon were narrowly beaten by St Patrick's, Dungiven, in the group game and with Tyrone teams famous for giving no quarter, the Claudy knew this one would go to the wire.

Conditions were difficult for both teams with a very heavy pitch and greasy conditions making the ball hard to handle. The teams traded point for point in the first-half with both sets of players struggling to find their rhythm at times.

The St Patrick's & St Brigid's defence worked extremely hard and their tackling was supreme. At the other end, the first-half was one where the normally clinical forwards weren’t on the same wavelength.

Only for the reliable boot of Niall McGonagle from free kicks, Claudy could have gone in at half-time with a much greater deficit. The margin was also kept down by the agile Cahir Melaugh, once again showing what a vital cog he has become in the wheel.

The second-half began in the same vein with both sides exchanging points. Claudy were slowly clicking into gear and their attacking play began to look a little more fluid however the moves they had rehearsed diligently in training were breaking down at the final pass with their timing a fraction off.

With 50 minutes played and trailing by a point, Niall McGonagle manage to break free from his marker and smash the ball into the Dungannon net, putting Claudy two points ahead.

Seemingly in control of the game, the Derry lads subconsciously tried to protect the lead and retreated into their own half. This invited pressure from the opposition but the defence thwarted wave after wave, putting their bodies on the line at times.

The referee signalled three minutes of additional time. Could the Claudy boys see this one out? With what seemed like seconds remaining, Dungannon clawed to within one point.

They felt aggrieved with close to two minutes being playing on top of the indicated three minutes.

It was time for Claudy to refocus. Calmness and composure were the key words but they were dealt a blow when midfield talisman Adam Murphy was unable to start, due to severe cramp.

The extra time period began in the same fashion with Dungannon on the front foot. They scored the opening two points in extra time. Other teams, having failed to see the game out in normal time, may have crumbled. Not Claudy. They fought back to level the game.

With their tails up, Claudy went on the attack.  The mercurial Tiarnan O'Connor conjured a yard of space for himself in the full-forward line, there was only going to be one outcome and he finished to to the net to open a three point cushion.

They had broken the will of Dungannon. With Niall McGonagle pulling the strings and the powerful running of the half backs and half forwards creating overlaps, Claudy kept the ball, snuffing the game out. The icing on the cake was a beautifully worked point from Daniel Johnston who epitomised the Claudy drive and determination.

St Patrick's Dungiven bowed out of the same competition when they went down to St Clare's Ballyjamesduff in their quarter-final on Monday in Drumquin.

The sides were level (2-18 to 4-12) after extra-time before the Cavan side won after penalty kicks.