FEATURE: Lavey woman on a mission to improve children's mindfulness

Happy Minds Grateful Hearts is based in Mid Ulster. 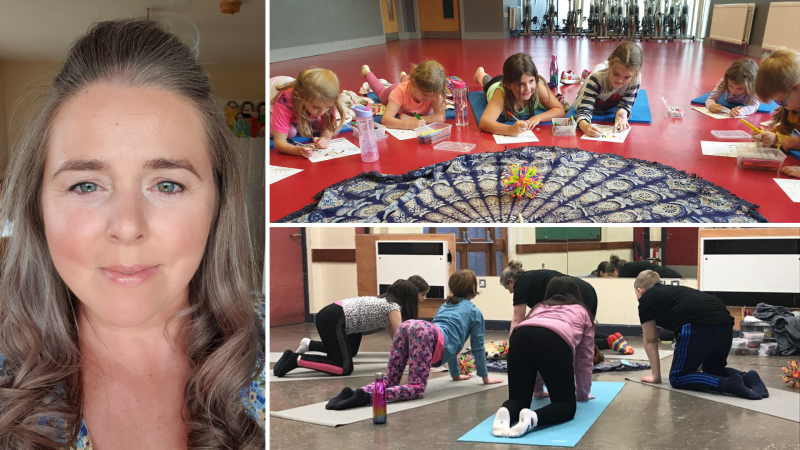 Amanda Brennan has drawn on her own experiences for her programme.

Drawing on her own struggles with mental health, County Derry mother Amanda Brennan launched Happy Minds Grateful Hearts to give children the tools to help maintain their emotional wellbeing. She tells Liam Tunney about her journey.

Amanda Brennan pauses after informing me she is a mother-of-ten, clearly used to the awe-inspired gasp the revelation invokes.

With her children ranging from a 22-year-old to a one-year-old, the Gulladuff woman has brought plenty of her own experience into her business, Happy Minds Grateful Hearts.

Providing programmes and classes designed to improve children's mental health, wellbeing and mindfulness, Amanda has traced her desire to help back to own struggles with mental illness.

“From my teen years, I would have struggled with my mental health,” she told the County Derry Post.

“I struggled with body dysmorphic disorder. I became bulimic and became almost anorexic then, I wasn't eating at all.

“That would have been when I was around 14, 15 years old, so I always struggled with my mental health on and off; I had anxiety and depression over the years.

“I hit rock bottom after my first boy was born, and I was having suicidal thoughts and everything, and I did try taking tablets, but thankfully it didn't work; it just made me sick.

“Those feelings returned again about four or five years ago after I'd had the twins, but I'd seen an advertisement for mindfulness and I thought I would give it a try. I've never looked back.” 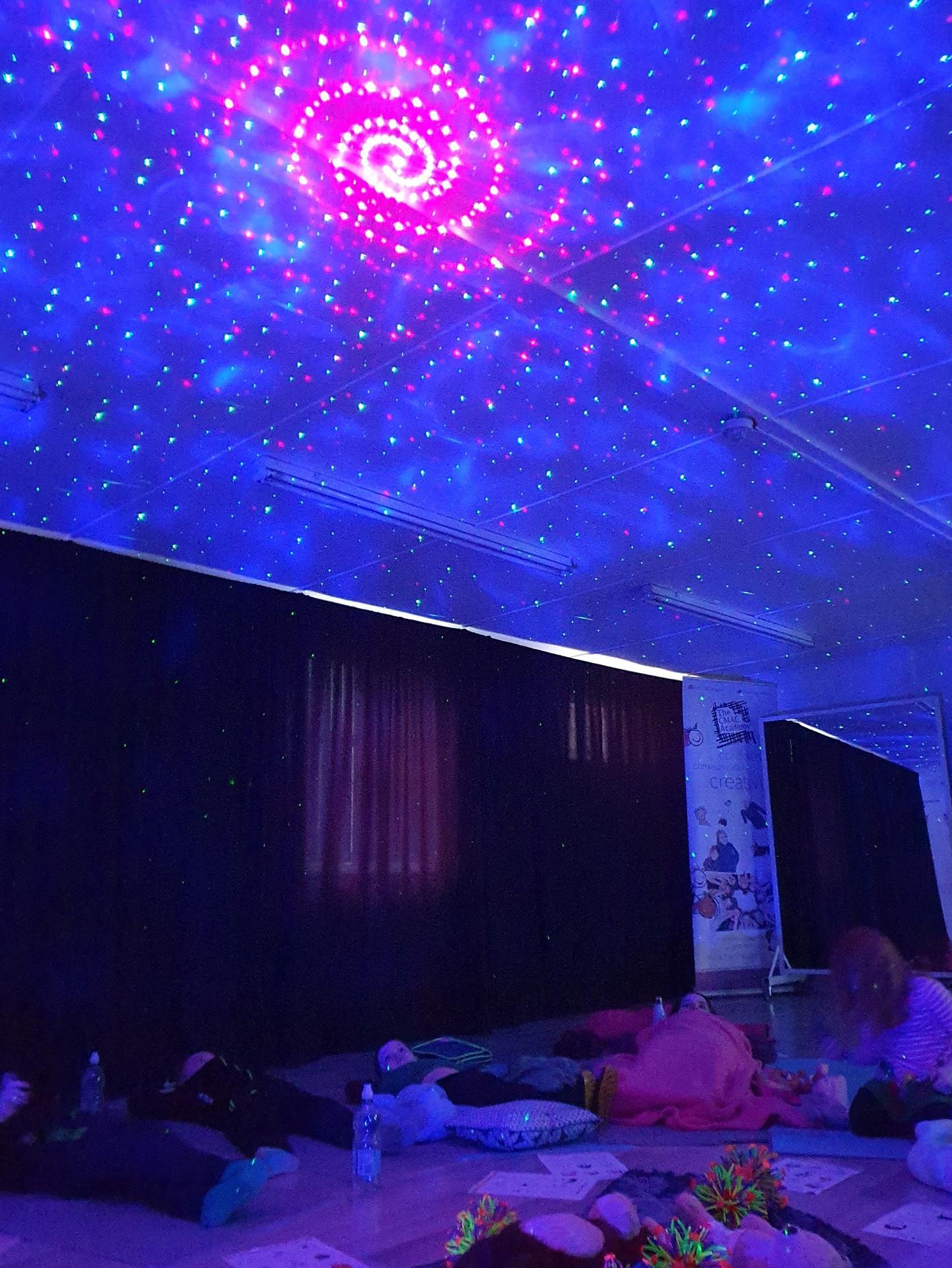 Amanda says there is no spiritual aspect to her classes, just children understanding how to manage their emotions.

Initially turning to the techniques as a way of improving her own mental health, Amanda soon found they had a profound impact on her wellbeing.

“I started looking into mindfulness, having a morning routine like journalling and positive affirmation, trying to be more mindful and present during the day, even in how I parented,” she said.

From anorexia to powerlifting: how training saved Sarah

At one point the Magherafelt woman was told she would never exercise again.

Ten years ago, while gripped with anorexia, doctors told Sarah McErlain she might not see Christmas, and would never exercise again. She speaks to Liam Tunney about her battle with the condition, the loss of her brother and her inspirational journey to competitive powerlifting.

“From living in my head all the time with the anxiety, and I'm not saying I was a bad mummy, but not being present with the kids and missing so much because of the anxiety, it changed my life completely.

“I'd probably go as far as to say meditation and mindfulness saved my life. It made me realise that I was missing out on so much. Life can be amazing, if only you take notice.

“I noticed the positive impact what I was doing was having on my own children, and that's when I thought 'I need to teach this to kids,”

She undertook training, first with Tyrone-based Pretzel Play, before training with Creative Mindfulness for Kids, an Irish-based company who have produced a curriculum for mindfulness.

Amanda says she has included a number of extra components in her training, such as the parenting and teenager add-ons, and has enrolled in a trauma-informed mindfulness course.

“Trauma for everybody is so different. Abuse would be at the top end of the scale, but it can be something like being bitten by a dog and being scared of dogs then.

“It is a spectrum, like autism. It's something I'm really interested in, and it goes into yoga therapy training as well.

“I've also completed a course for mindfulness for those with additional needs, so it covers autism, ADHD, Downs Syndrome and even anxiety. 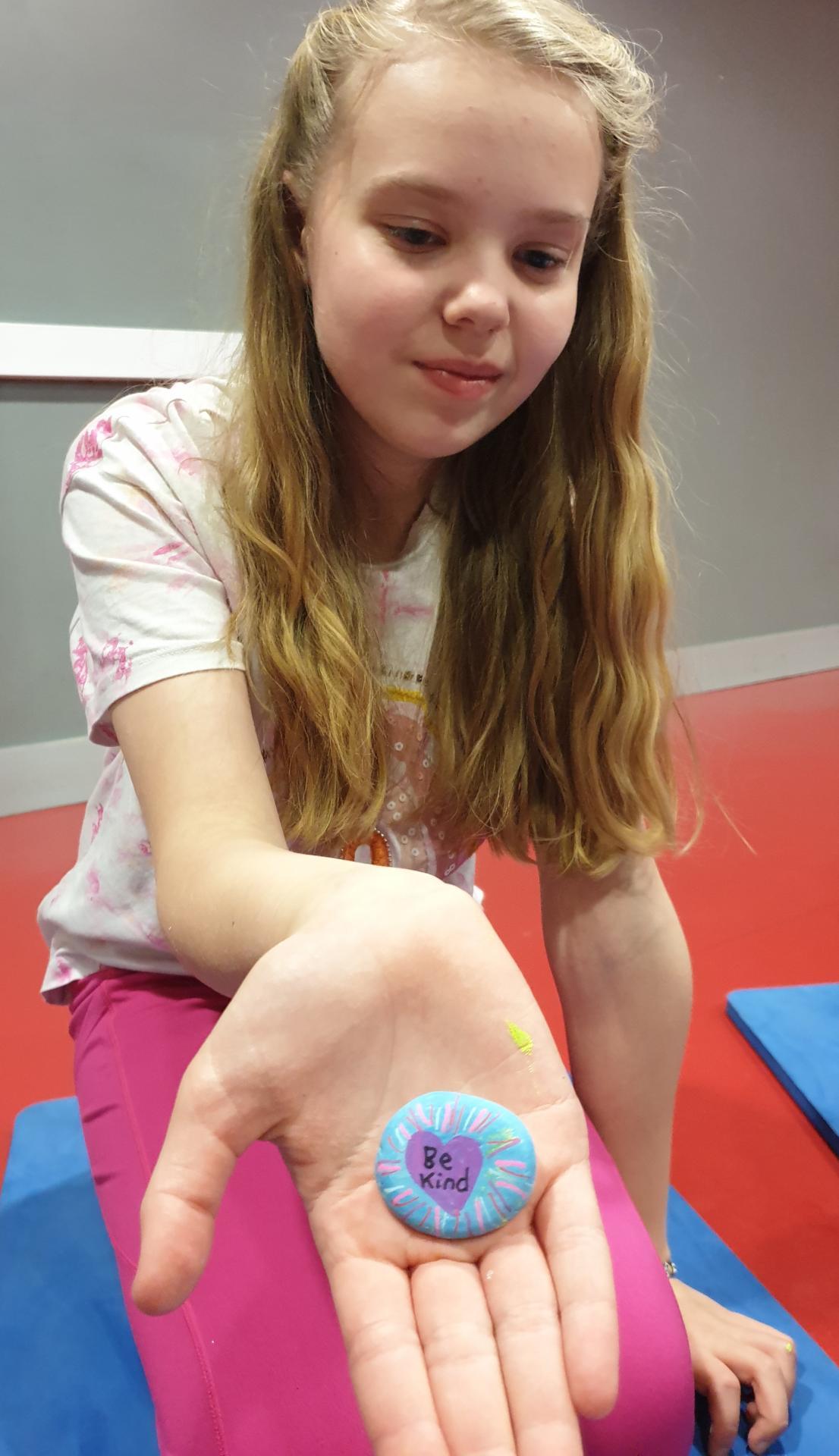 Activities such as arts and crafts are important for children's wellbeing.

“I'm just finishing yoga for additional needs as well, because I don't want any child to be excluded. My classes are for everybody.

“I have classes that run that include children with additional needs, but sometimes parents are scared their children are going to disrupt the class and they'd prefer a class for additional needs.”

Put on the spot, the Lavey woman defines mindfulness as 'being present in the moment'.

“Sometimes our minds can be so busy; we're worrying about something that happened yesterday, or that's going to happen next week,” she said.

“When a similar experience happens, these emotions and anxieties make us behave in the same way, so it's a vicious cycle.

“What mindfulness does is strengthen the reasoning part of the brain, at the front, and helps us to rationalise and decide whether something is real and true.

“Mindfulness gives you those tools to become aware and accept all your emotions do belong; every single one. 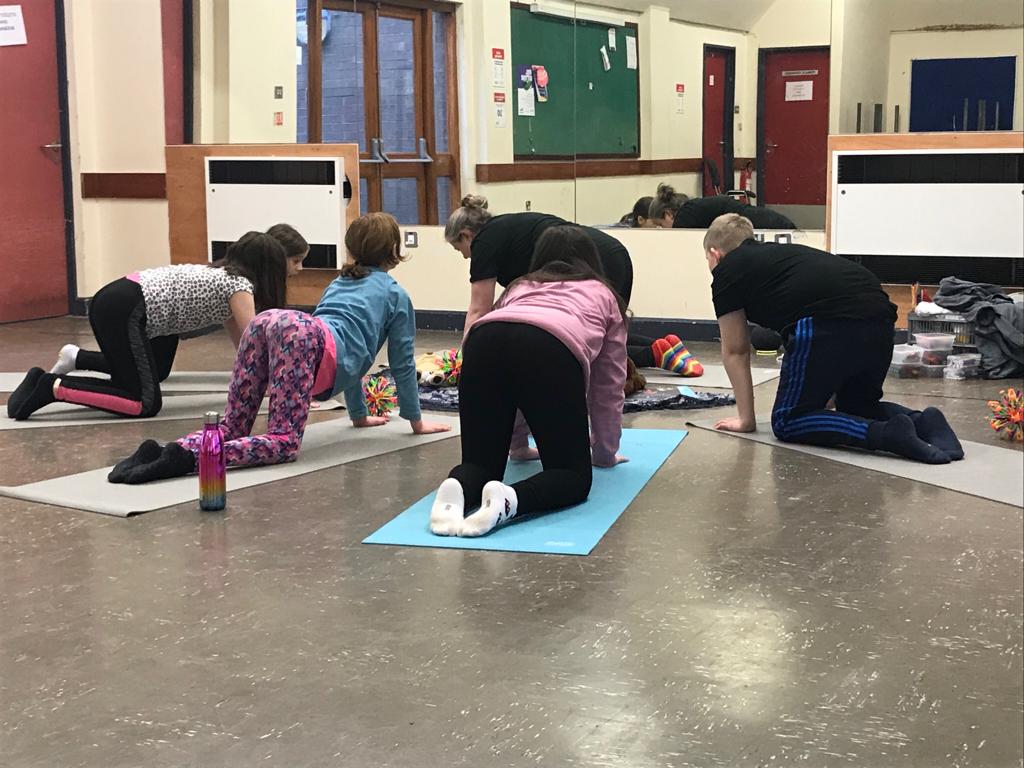 Children at the sessions are taken through a variety of exercises to help improve their mindfulness and wellbeing.

“Happy belongs as much as sad, scared as much as excited. People try to push things away and then it becomes worse.

“I try and explain it to the kids like this. If a fly is annoying you and you keep batting it away, it keeps coming back.

“If you leave the fly alone, you notice it, it's there, then it doesn't annoy you as much. It's about becoming aware and accepting every part of you.”

The Covid-19 pandemic has had a devastating impact on the mental health of some children, and the importance of mindfulness has only been increased by its effect.

Amanda says children as young as five are presenting with symptoms of anxiety.

“I've a lot of concerned parents from kids in Foundation Stage in school which is very scary,” she said.

“I really want to get into primary schools and secondary schools. It's so important all the time, but more so now, because there are so many children experiencing anxiety, even from a very young age.

“We need to be careful what we're saying and listening to, because they're like wee sponges. Kid's mental, emotional, physical health and wellbeing is so important.”

A common misconception of yoga, meditation and mindfulness is that there needs to be a spiritual or religious element involved, but Amanda says this is not the case. 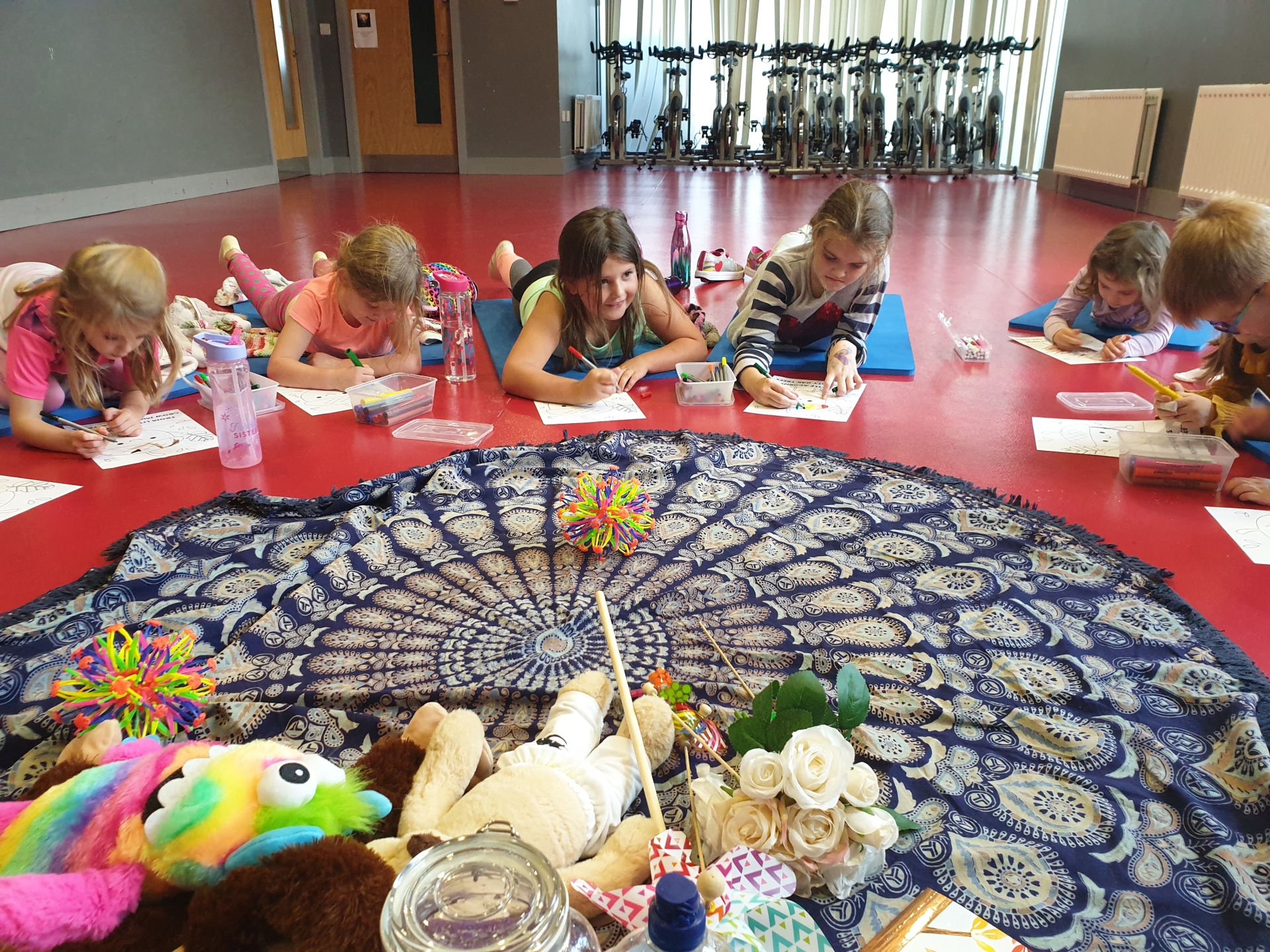 Her sessions involve some stretching, team work games, breath work and some general discussion, as well as some arts and crafts and other creative activities.

“There is no spiritual or religious context to my work with children at all. It's just totally about them understanding,” she said.

“Then it's about giving them tips, tools and techniques to be able to deal with that and teaching them through the various things that we do.

“Yoga is just a movement of energy through the body. Meditation is all about relaxation and using our imaginations to imagine we're somewhere magical.

“It can scare some people whenever they don't know what it is. People can be spiritual in their pactice, but not when it comes to the children we work with.”

Amanda says the most rewarding thing about what she does is the feedback she gets from parents and the effect her work has on the children.

“There was one child who didn't really speak, and was having play therapy and different things,” she said.

“The school rang their mummy the week after we had our first class. They said he had told them about this great wee class he was going to and it made such an impact on him that he spoke.

“Things like that make me realise how important it is and it fills my heart with so much love and gratitude. I feel like I've found my purpose.

“That's why I called the business Happy Minds Grateful Hearts, because I would love every child to have a happy mind and a grateful heart; from toddlers right up to teens.”

You can find out more about Happy Minds Grateful Hearts, including details of upcoming classes, on their Facebook Page.