'I've lived a dream, spending most of my days under water' 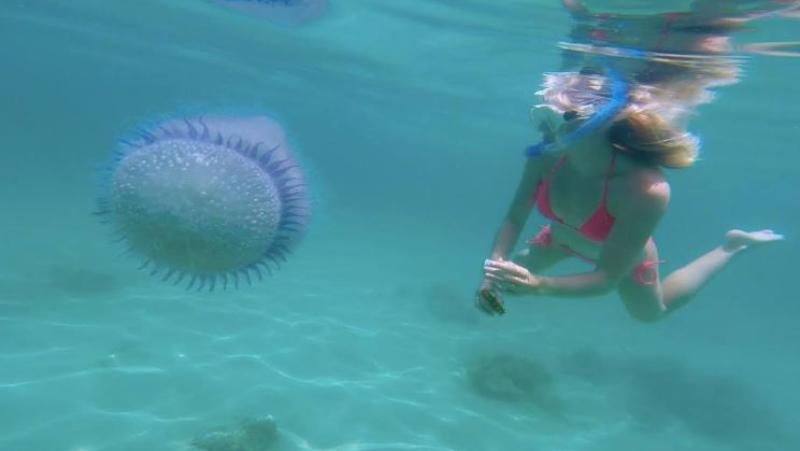 Aoibheann has encountered numerous exotic species while diving around the world.

Derry woman Aoibheann Gillespie-Mules has returned to Ireland after spending years travelling the world. As a qualified diving instructor, she has visited some of the most exotic underwater locations. Today, she reveals her favourites and tells of the difficult decision of going ahead with her wedding to Raffy on an exotic island in the Philippines without any of her family in attendance due to the coronavirus pandemic.

Little did Aoibheann know when she first entered the water as a toddler in the Portnoo area of Donegal, she would go on swim underwater at some of the world's most exotic locations.

When asked what is the favourite country she has visited, Aoibheann had no hesitation.

“It definitely has to be the Philippines, and one island in particular is Palawan, Raffy’s home. Many family and friends from home stopped over in this stunning spot where I had the chance to take them diving and exploring the islands.

“Every year in Raffy’s home, on his local beach, female turtles come to lay their eggs - last year over 100 nests hatched. This country has such a special place in my heart, not only from the nature and beauty but now, of course, my family connection through Raffy.

“As a scuba instructor I was hoping to find a place where the jungle met the sea, where I would be diving daily in clear, torquise waters seeing turtles on every dive. I found a job in the gorgeous village of El Nido, on Palawan looking for new instructors and I took a chance and all of a sudden I was on the plane to the Philippines – it was literally the dream job

“My first job was in a family-run dive centre in El Nido where I was mainly instructing and guiding customers around the reef. Over the three year period working here I instructed nearly 500 students from beginner courses all the way up to professional courses. We were doing three-four dives daily and as intense and challenging the job could be the experiences were incredible - working in such a positive environment, introducing people to the underwater world and helping students learn and develop their skills as a diver.

“We moved to another island, Negros Oriental, and spent four years working at Marine Conservation NGO where I worked as the lead instructor and volunteer co-ordinator for up to 40 volunteers, mainly focusing on professional courses for our interns.

“Aside from instructing, we were much involved in monitoring the reefs along the coastline, working with local communities and government units to help protect reef, mangrove and seagrass ecosystems.”

Aoibheann has dived in many different countries now, from Australia, all around South East Asia, Africa and, finally, Ireland.

“They have all been spectacular in their own unique way - the top on my list has to be our trip to Tubbataha Reef Marine Park, almost 100,000 hectares of high quality marine habitats.

“This reserve has been protected since the early '80s by an amazing team and is one of the most beautiful and pristine areas I have seen - from the tiniest marine creatures to some of the largest - we spent a week diving here and every dive blew me away. It was incredible to see that a Marine Protected Area (no take zones) can be successful if well managed.”

Aoibheann met, Raffy, the man who would become her husband, in El Nido.

“He was working as boat crew and a scuba technician for the dive centre I started in. He had been working there a few years already. He later became a scuba instructor too.”

Aoibheann conceded deciding to get married thousands of miles from home without any of her family present was a 'difficult'.

She said: 'We had been preparing as best we could within the organisation but like most, nothing could really prepare us for the world shutting down.

“As airlines were cancelling flights, our focus was to get our international volunteers off the Island and to Manilla to make sure they could catch the last flight home. It was a race against time, and very traumatic for many, we then had to decide ourselves if we would leave ASAP which meant being separated, or decide to stay, which meant we could be together but knowing that we may not be able to leave the country/see family, for who knew how long.

“That also meant accepting if a family member took ill that I would be unable to travel home.

“We were on a different island to Raffy's family, too, which meant we were also isolated from them. We decided to stay together and stick it out. Unfortunately, with the tourism industry hit so hard we also lost our jobs, but the main thing was that we were safe, together, and were able to stay at our work base (eight months) until we decided to relocate home to Ireland with our dog. I definitely wouldn’t recommend relocating during a pandemic whilst travelling with an pet. It was a nightmare, but we made it and it was completely worth it.

“We always wanted to eventually come home to Ireland but the pandemic sped it all up. We looked at it positively as a chance to reconnect to my roots and find my feet again after being abroad for years and, of course, be close to family – although we couldn’t have found a further spot from Derry - we’ve relocated to beautiful Kerry, where I’ve found a position managing a small marine awareness and activity centre.

“I’ve been able to reconnect with the ocean/marine life in Ireland, hoping to get comfortable diving in cold water and continue to work in marine awareness, connecting people to our oceans and their importance to us as a species – in turn to help sustain and protect what is left in our marine environment.

“My main role is working in marine education focusing on ocean literacy, running activities that help connect/reconnect people with our beautiful ocean. Activities such as snorkelling, paddle boarding, kayaking and seashore safaris where we take groups rock pooling along the seashore finding the most weird and wonderful creatures – hopefully, diving in the future, once I get used to the cold water.

“The Irish coastline is an incredible place for marine biodiversity so it’s been wonderful chance to reconnect myself and have the opportunity to guide others to experience the magic.

“During the lockdown I actually started a photography website, showcasing the intricate details of coral reefs, but I am so excited to add Irish marine life to it - check it out... www.coralreefbeauty.com.

“It’s been what feels like a very long time since I was home in Derry for a period of time, but looking forward to spending more time there catching up with old friends and family. It's been a crazy year of uncertainties, change, tough situations and decision making for all of us - I am so grateful and fortunate to have an incredible family here in Ireland and in the Philippines, and an amazing group of friends from all over the world who have been so supportive throughout my life abroad.

“It definitely hasn’t been easy at times, but the journey and experience has been completely worth it - has led me to meet the love of my life and spending most of my days under the surface exposed to such ocean wonders. I’ve lived a dream.”

Aoibheann said one thing that had 'really shone a light' during the pandemic was how important our surrounding natural world was, not only to our mental health but to our survival as a species.

“Over 50% of the oxygen that we breathe comes from the ocean, it is so vital that we keep on making changes In our lives to give back to our gorgeous environment. We need to protect our oceans and natural world, and in turn, it will protect us.”