FEATURE: Spires Park: The seed that grew on Stoney ground

How a County Derry football club defied the worst recession in recent memory to develop their ground,

Liam Tunney revisits the story of how Magherafelt Sky Blues future-proofed their facilities and defied the worst recession in living memory to build a lasting legacy for football in the area.

In 2006, Magherafelt Sky Blues were moving along nicely. The club had been invigorated at the turn of the Millennium and in the 2005-05 season they had narrowly missed out on the league title.

Hearts and minds were already looking to future progress on the field, but a sudden council decision was to plunge the club into uncertainty, inadvertently removing that field.

“The team, having examined the council plan, observed that it did not comply with intermediate football rules.”

The club's original mini-soccer center back in 2007.

The decision left the club in an awkward spot. Strict conditions had to be met for the Sky Blues to continue to compete at intermediate level and they were about to be rendered homeless.

There were limited options within the council area for leasing pitches that would meet the league's rules, but a solution was found less than a mile from Meadowbank.

“At the monthly Sky Blues meeting it was agreed to ask the council to rent out a pitch in Magherafelt known as Stoney Park,” said Robert Rainey.

“This pitch was a nightmare to the council as it was open ground and very hard to maintain, so the council agreed to this request from us and a lease was agreed.”

An agreed 25-year lease on the land marked the first step on a challenging journey to creating a facility fit for a club with ever-growing ambitions.

The playing surface at Stoney Park lived up to its name and was hard and unforgiving. The club's plans included the resanding and drainage of the entire area. 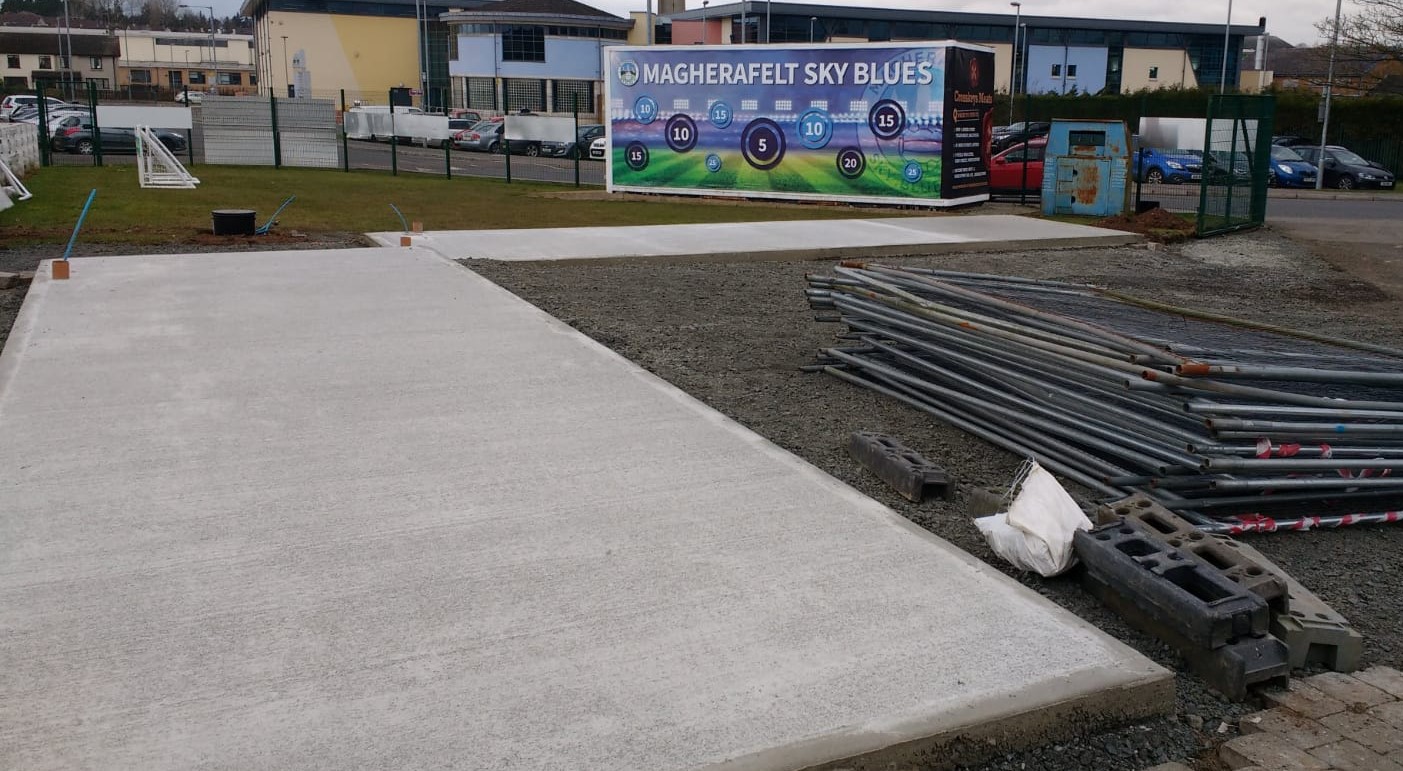 Work at Spires Park in 2017 ahead of the club's new committee room and kitchen.

The development would also include an exterior and interior fence, a new two-team changing facility, showers and a separate referee's changing room.

Consultation with local residents proved just one of a number of hurdles the club had to navigate in getting their plans through.

They enlisted local MLA Patsy McGlone to help with their application, and at a make-or-break planning meeting in Ballymena, their plans were approved.

With the area acquired by the club known as 'Stoney Park', the club felt a rebranding was in order and officials convened in a snooker room connected to Anthony Campbell's house in Magherafelt.

Amid lively discussion, Martin Kerr proposed the facility's name be changed to 'Spires Park', a reference to the distinctive spires of the town's three main churches. 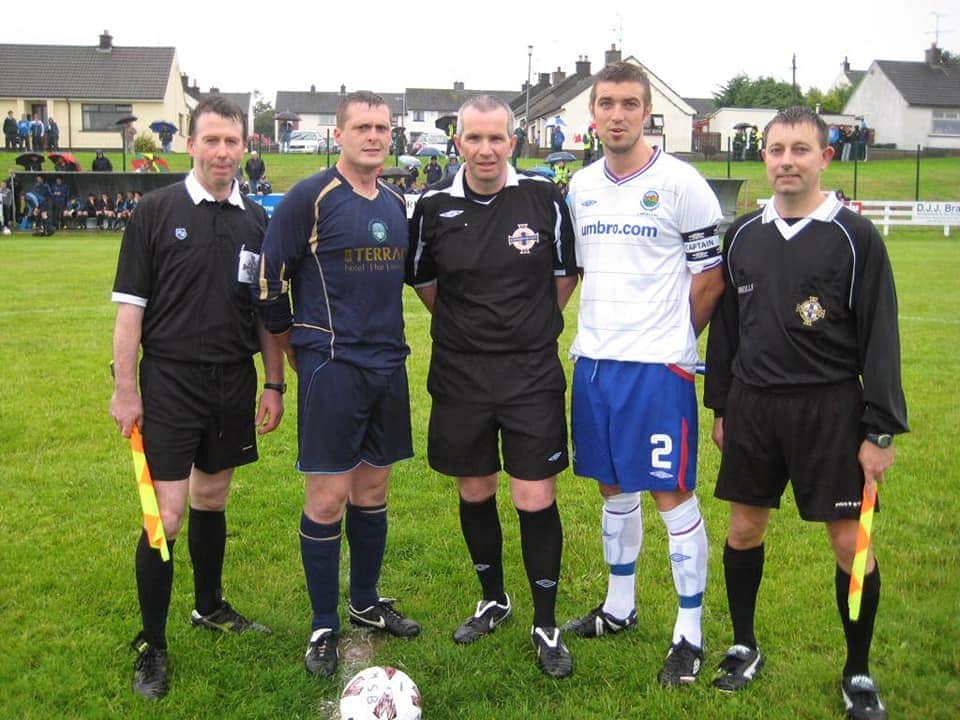 Linfield played at official opening of Spires back in 2009 pictured was club captain Gareth Cassidy.

The committee concurred, and Kerr's canny name change banished many club members' memories of the difficult playing surface in one fell swoop.

By the summer of 2007, the fencing, painting and decorating had all been completed, in time to allow the Sky Blues to commence the 07/08 season in their shiny new home.

The changing rooms and referee's facility were next on the to-do list, and as the club continued to grow, further upgrades were required.

“We knew Magherafelt and the South Derry area was a hot bed of footballing talent,” said former Chairperson Glenn Robinson.

“All we had to do was put the hard work into securing Spires, and we knew the club would thrive. The decision by the council had forced the committee to think big picture and long term.

“To our delight, we leased Spires Park, redeveloped it, and during the worst recession in living memory, secured and repaid the finance required to do it.”

The development of he facilities took a further step under the leadership of Chairperson Brian Surgenor.

Office cabins, a small kitchen, disabled access toilet and large meeting space were among the progress, as well as a new storage shed and ball stops at the leisure centre end.

With a top class facility in place, the club's volunteers put their shoulders to the while in maintaining the Sky Blues' focal point in the area. 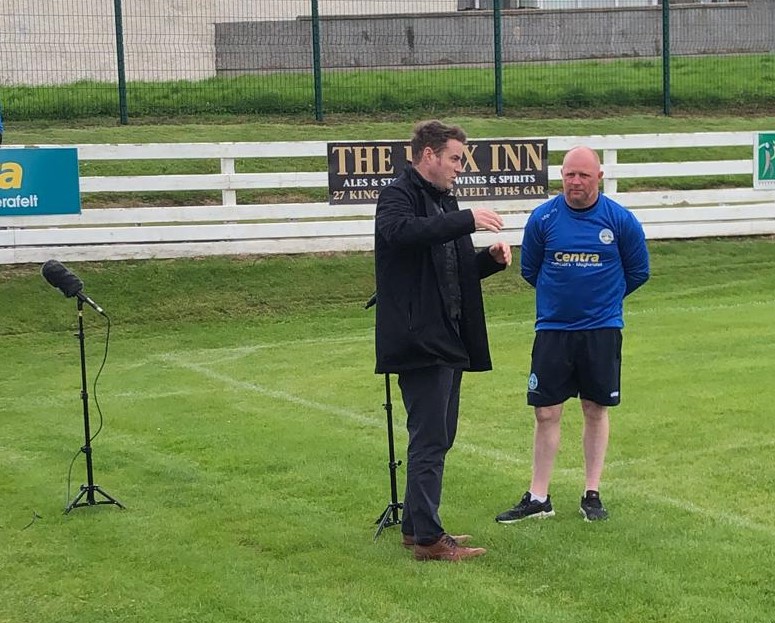 BBC came to town last year to interview all the local clubs in relation to Covid-19, Thomas Niblock is pictured with Club Chairman Gerry Kelly.

Glenn Robinson highlighted the importance of Spires Park in securing the club's status as an important piece of County Derry's footballing tapestry.

“The decision to move to Spires has catapulted Sky Blues as an important football brand and club not only in South Derry but also Northern Ireland,” he said.

“Since 2007 thousands of young and old players have used the facility and everyone from the original committee back then to the current one should be congratulated for the work they have put into this.

“Football is the beautiful game and Spires Park has given so many players in this area a chance to enjoy the game we all love.

“Everyone linked with this club should be proud of what they are doing to provide these opportunities.”

Last week, the thud of colliding leather echoed around Spires Park as collective training resumed. The excited cries of young and not-so-young players. Yelps of celebration.

The sounds of football are back and through years of hard work, the Sky Blues have built an arena fit to welcome them.