The Derry City story: How a football team gave hope to a city during very dark times

New documentary being screened on the BBC next week 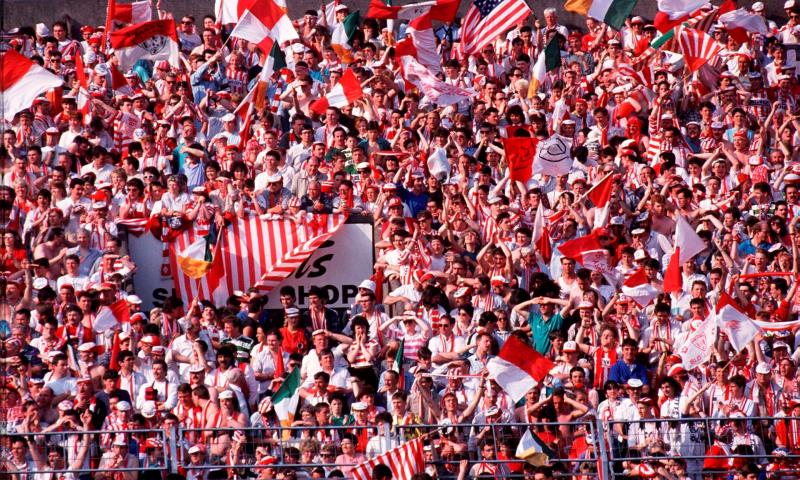 Derry City fans travelled in their thousands to away games.

Ahead of the screening of a new BBC documentary next week about the story of Derry City's entry to the League of Ireland, Derry News managing editor Ciaran O'Neill recalls the magical journey that the club and its fans enjoyed in the 1980s.

IF I ever make it to the gates of Heaven, before he (hopefully) lets me in, I am expecting God to say, “Ciaran, can we talk about the Derry City years”.

It's fair to say that I went slightly off the rails when Derry City football club was reborn in the mid-1980s.

Dobbing Mass and breaking my Confirmation pledge in a Dublin pub are just two of the sins I will have to answer for.

However, no matter what excuses or apologies I put forward, it was worth it.

For those of us who lived through those years, it was a magical period in what were very dark days.

With the BBC screening a documentary next week on the story behind Derry City's entry to the League of Ireland in 1985, the programme is sure to bring back many of those memories.

Derry played their first game in the league on September 8, 1985, at the Brandywell against Home Farm.

However, it was so much more than just a football match.

In September 1985, Derry was a not nice place to live. Hope was in short supply. The Troubles continued to dominate our lives on a daily basis.

The Anglo-Irish Agreement was signed that year and Paisley's 'Ulster Says No' campaign was in full swing. People were still being killed in the streets where we lived and divisions in our community seemed as deep as ever.

Peace seemed a long way off and the life plan for most young people at that time, myself included, was to finish school and leave as soon as possible.

Then, however, things started to change because of the Derry City story.

Suddenly, Derry was on the news and it wasn't because someone had been killed or a bomb had exploded. Suddenly, people were saying good things about Derry. Suddenly, we were proud to say that we were from Derry.

My 13-year-old self went along to that first match against Home Farm in 1985 with friends, more out of curiosity than anything else.

We all supported teams in England but had never had our own local team to follow. Now, this was our chance.

We had all heard the story of how Derry City had to leave the Irish League in 1972 because the Brandywell ground had become a 'no-go zone' for opposing teams due to the threat of violence.

However, despite a fair bit of hype, we didn't expect the Home Farm match to be that big a deal. But it was. 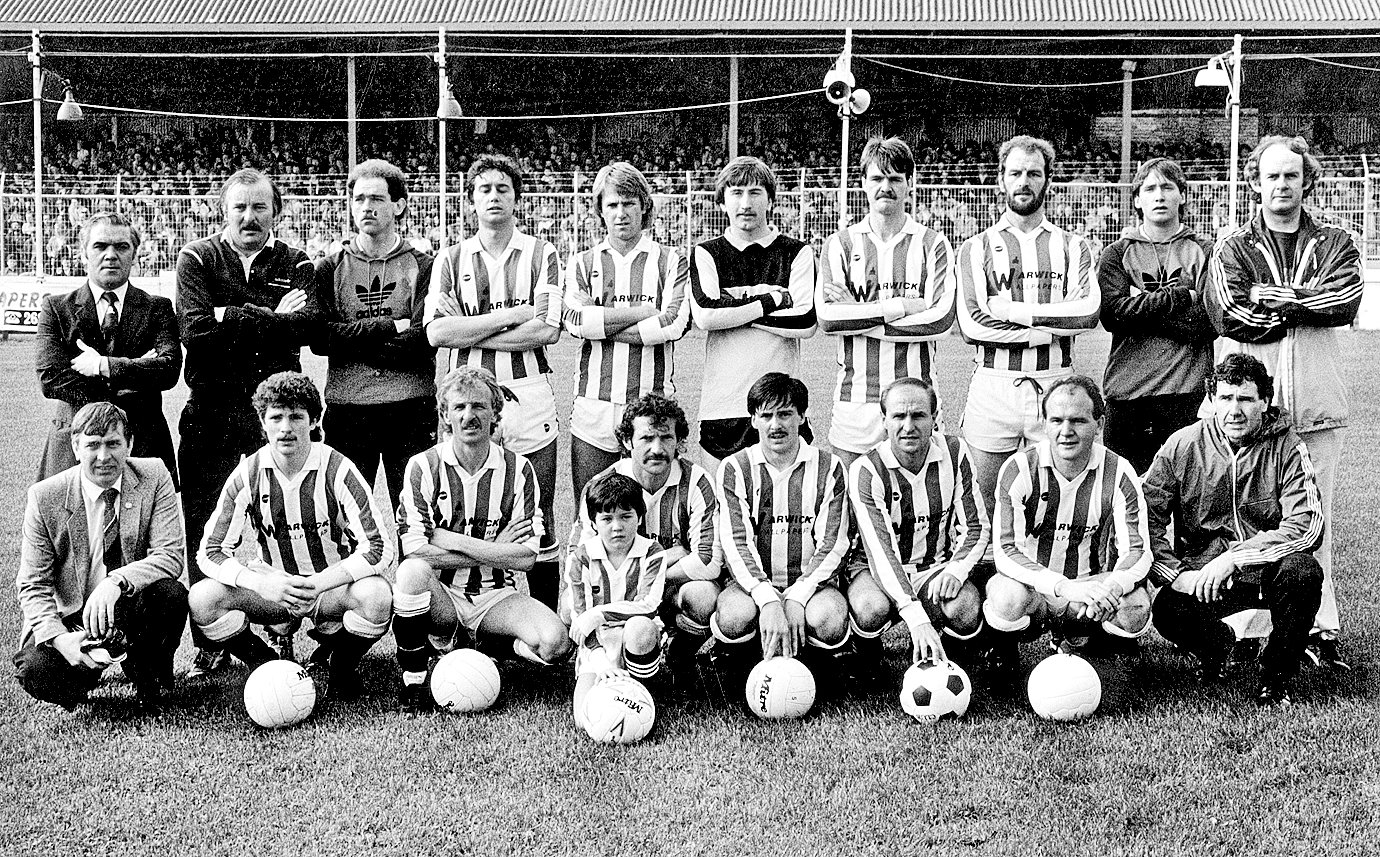 A crowd of around 10,000 packed into the Brandywell and the atmosphere was like nothing we had ever experienced in our young lives.

We were hooked and it was the start of something very special.

Before long, it seemed that the whole city had been swept along on the Derry City journey. The Brandywell was packed for every home match.

The games usually kicked off at 3pm on a Sunday. We would arrange to meet up outside the local chapel having told our mothers that we were heading to 12 Mass.

Mass was forgotten about as we made our way to the Brandywell to ensure that we got a prime spot in the 'Jungle' terrace. We would arrive at the ground a couple of hours before kick-off. It was the highlight of our week and such a release from everything else that was happening.

If the home games were special, the away matches were unbelievable.

Derry fans travelled in huge numbers all over the country. The League of Ireland had never seen anything like it

It was not unusual for 50 buses to be leaving Derry on the morning of an away match.

The Derry fans brought huge excitement and business to the areas they visited. Again, we were proud to show off our pride in where we came from.

So many people in the south, understandably for the most part, had a bad opinion of the North and its people. The Derry City fans did a lot to change people's attitudes.

It was not all a fairytale. I would say that people living in villages on the road from Dublin such as Ardee and Emyvale are still haunted by some of the sights they saw when the Derry buses pulled in on the way home.

To be fair, I am still haunted by some of the sights I saw on the Top of the Hill bus on the way home from Dublin.

However, despite the odd hiccup here and there, it was a magical time and helped create so many great memories.

One of mine, which God may bring up during our chat at the gates, happened during one of our trips to Dublin.

After getting off the non-drinking 'Fanta' bus, myself and two pals thought this would be a great opportunity to try and buy our first pint, being so far away from the watchful eyes of our parents and neighbours.

The three of us, all aged 14, purposely picked a rather rundown pub close to Dalymount Park in the belief that they would welcome trade from anyone.

We walked into the bar to be greeted by a few strange looks from the handful of aul boys sitting at the bar.

Given that I had drawn the short straw to order the drinks, I was pushed forward by my friends and I asked the barman in the deepest voice I could muster for three pints of Guinness. He looked at me and smiled.

I feared the worst and had visions of me having to ring home to my ma and tell I had been arrested in Dublin for breaking my pledge and she would have to come and bail me out.

The smiling barman looked at the three sheet-white teenagers covered from head to toe in Derry City paraphilia and then looked at the aul boys sitting at the bar.

One of the aul boys, who appeared to be the leader of the elderly gang, gave what appeared to be a nod and a wink to the barman and the next thing we knew he had a pint glass in his glass.

“Sit down over there lads and I'll bring your pints over,” he told us.

Quickly, we rushed over to our seats and starting pulling out our 'punt coins' to make sure we had enough money to pay for the bloody things.

The barman arrived a few minutes later carrying the three pints in his two hands like some sort of wizard. We paid the man and sat looking at our first ever pints.

There followed a short argument over who should go first. It was decided that we'd all take a sip at the same time.

With the eyes of the barman and the aul boys firmly fixed on us, we lifted our glasses and took our first sip of Guinness.

I suddenly had the urge to boke and I could see from pals' faces that they felt the same.

However, given the public humiliation that awaited us if we failed to finish the pints, we soldiered on until our glasses were empty.

It was to be many years before I tried another pint of Guinness.

The Derry City rollercoaster continued throughout the late 1980s, culminating in the team becoming the first, and still the only, team to win the historic treble of domestic trophies.

However, as always happens, all good things come to an end. Derry City gradually became a 'normal' team. Many people who had caught up in the excitement faded away and it was left to the hardcore fans to continue supporting the team.

Nowadays, a few cars travel to the away games as opposed to scores of buses.

However, Derry City will always have a special place in local people's hearts because of those years in the 1980s.

We suddenly had our own local heroes to follow and the club attracted players from all around the world. We even had our own Brazilian.

The team, and the buzz that its rebirth created, lifted a city when it very much needed to be lifted.

Bill Shankly once famously said: “Some people think football is a matter of life and death. I don't like that attitude. I can assure them it is much more serious than that.”

I may be a Liverpool fan, but Shankly did talk some rubbish at times.

Football is not a matter of life and death.

Living in Derry in 1985, we knew only too well what life and death was about.

Football was not more important, but during those magical Derry City years it certainly gave us a chance to dream and hope for better days.

Different League: The Derry City Story will be shown on BBC2 at 9pm on Monday, April 19. It is billed as the story of a community that needed to catch a break and how its football club, exiled from the league for more than a decade, was brought back from the dead.