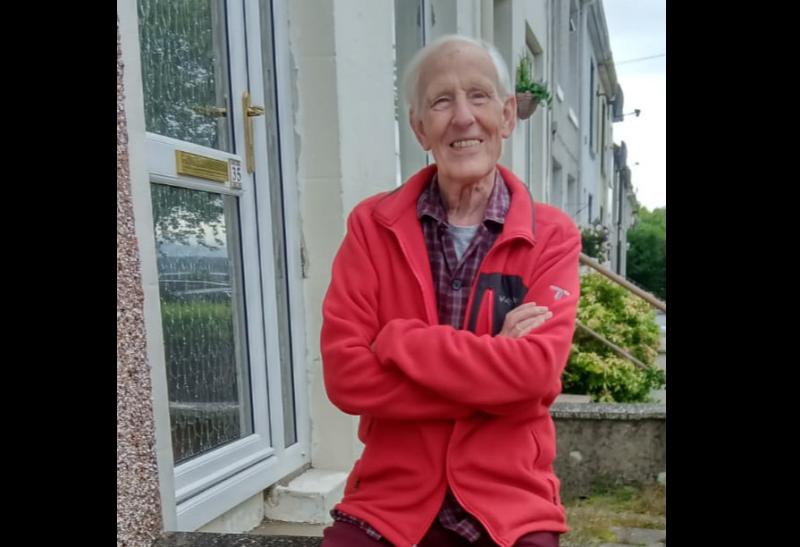 Wesley Colhoun passed away in January.

My next door neighbour (on my left) at 35 Demesne Avenue was the one and only Wesley Colhoun.

Wesley was born and reared in 35 Demesne, that terrace of houses overlooking what we still refer to as the “ New Road”, a terrace built a dozen years or so before the Londonderry Corporation initiated the post war creation of the Creggan Estate.

Tragically, Wesley passed away alone at his home around January 10th.

My next door neighbour (on my right) Brian Martin answered a concerned call from Wesley’s son, Andrew, on January 11th by popping in to see if Wesley was ok only to find that he had passed away-- a major shock for Brian and for us all in Demesne.

In some ways, Wesley was a larger than life, colourful character.

In his early eighties and in spite of the pressures brought by Covid, Wesley still very much enjoyed a thread of conversation and a bit of craic.

Before Covid, many’s a morning I’d see him heading down the green slope in front of Demesne to catch the Creggan bus into town.

He’d shop a little at TESCO’s, walk over to the Central Library, linger a while there chatting with the regulars, then catch the Creggan bus back up to Demesne enjoying the roundabout route the bus would take, a roundabout that enabled further chat and craic.

Other mornings he ‘d head down to William Street Baths for a swim and a chat Simple but precious and life-giving routines
Covid inevitably restricted Wesley’s social life about the town but he rarely grumbled. “How you doing, Wesley?” “Never better” he might reply.

Wesley still referred to Jean as “the wife”. They certainly remained friends, talked together on the phone and frequently holidayed together.

On the morning of the funeral, beautifully managed by Adair and Neely’s, a grieving Jean requested that the cortege drive from the Foyle Road up to Demesne and pause in front of the Colhoun family home.

The neighbours who had known Wesley for so many years more than myself came out onto the street to salute Wesley one last time and say a silent prayer.

This was a touching, dignified and generous moment.

When I first moved to Demesne in 2002, Wesley was to the fore in making me feel welcome.

He offered to fix the creaking gate in front of my house. That neighbourly act was typical of him and was the start of our friendship.

In 2002, his mother Ethel was still alive though elderly and in need of constant care. Wesley provided that daily care until Ethel passed away in 2005.

Caring was part of Wesley’s make-up. For years he had been a psychiatric nurse, first in Gransha and later in Scotland to where he and Jean had emigrated during the 1960’s.

Together they raised four sons: Geoffrey, Andrew, Stephen and Greg.

In 2006, as part of the 50th anniversary celebrations of the Holy Child PS Wesley volunteered to come into the school and talk to the youngsters about growing up in Creggan before the estate was built, before there was a Holy Child’s School or a St Mary’s chapel.

The children struggled some to imagine those wide open spaces that Wesley conjured up when he was a child in the late 1930’s and early 1940’s.

One more recent night in Sandino’s, in the company of myself, singer-songwriter, Roy Arbuckle and our English friend Andy, he protested to the deejay about his choice of music, asking for a few dance tunes that were more “his era.” Of course we “slagged” him plenty about this. Now we have only the gift of that memory.

Last Christmas morning, stood in our respective backyards, he and I had a socially distanced celebratory glass of whiskey, Jameson’s of course, and a wee mince pie and then on New Years Day, we had another glass of Jameson’s together.

I did not know then that this would be our last drink together this side of the grave.

Brian, Nicola and Sean had Wesley in with them for Christmas dinner in 39 Demesne. As we say here, he was “in good form.”

Wesley was buried on Thursday 14th January in Altnagelvin Cemetery, Waterside. He wanted neither minister nor priest but he loved the psalm “The Lord is my shepherd” and had requested that one of his sons read that psalm by his graveside where he is now buried with Ethel and his father, Billy:

“The Lord is my shepherd; I shall not want. He maketh me to lie down in green pastures; he leadeth me beside the still waters.”

Wesley may you rest in peace.

I still keep looking around expecting to see you, maybe out in your backyard re-filling your bird feed or heading down to your allotment, your “secret garden” from where you sometimes fetched rhubarb or daffodils for us your neighbours.