Aoibheann and Raffy celebrate part of their special day underwater 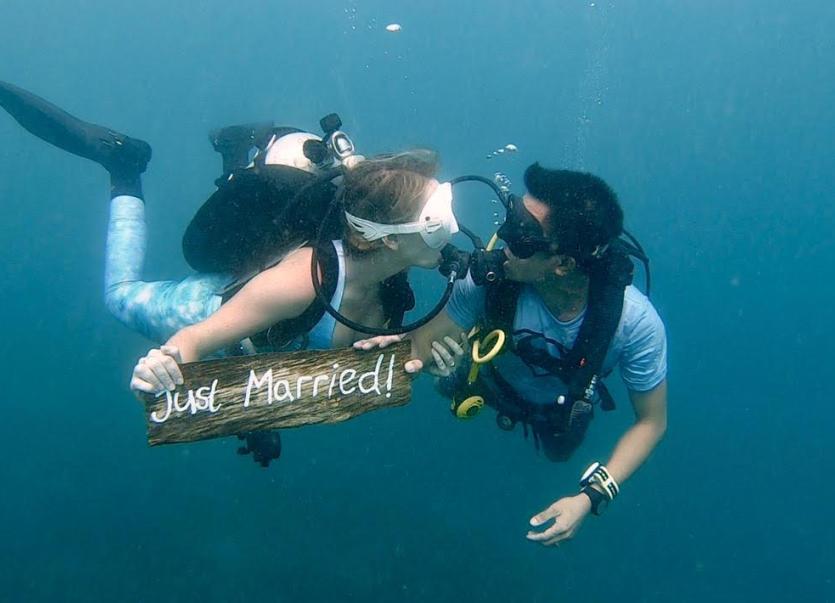 Aoibheann Gillespie-Mules and her new husband Raffy celebrate their wedding with a kiss underwater.

They say you should never dive into anything, especially marriage.

Well, a Derry girl has torn up the rule book and thrown it away after tying the knot in a dream wedding in one of the world's most stunning locations.

After a three-year engagement, Aoibheann Gillespie-Mules recently married long term partner, Raffy Casinares, on the island of Negros Oriental in the Philippines, where she has been living and working for the past seven years.

Following the ceremony, the happy couple, who both work for Marine Conservation Philippines, wasted no time in sealing their match-up with a loving kiss during a dive in the warm waters surrounding the island, something Aoibheann was very comfortable with, seeing that she is a master dive instructor.

However, due to coronavirus restrictions, the 31-year-old's family were unable to attend the ceremony. She, Raffy, the Mayor of Negros Oriental and two friends/work colleagues were the only ones in attendance. 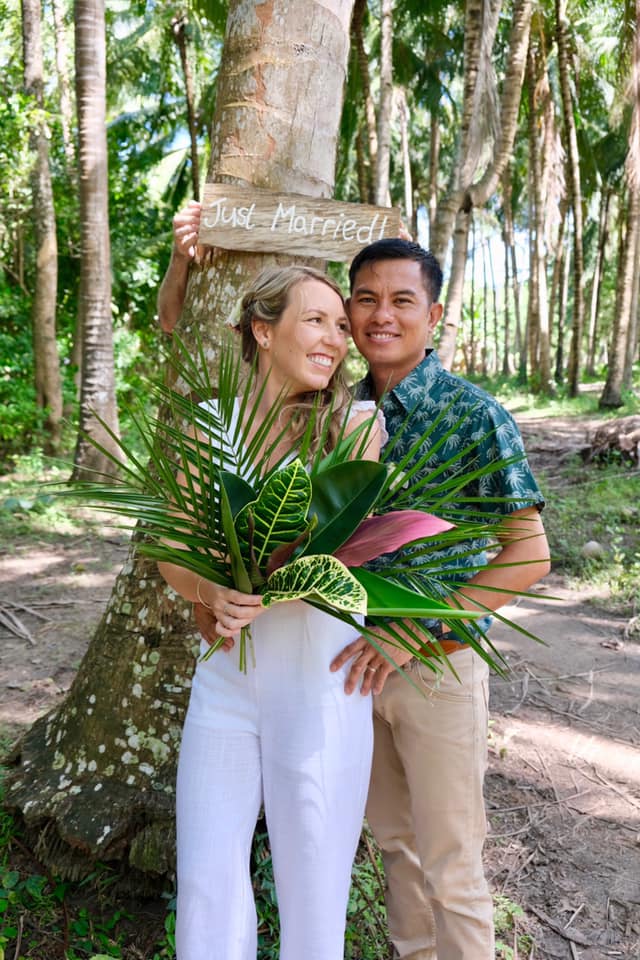 Aoibheann's mother, Daisy, said she wasn't disappointed at not getting to attend the wedding.

She said: “She told me via What’s App about getting married. We’ve always used the internet a lot, to keep in touch. I was delighted. They’d been thinking about it quite a bit and trying to work out where, the Philippines or here (Derry), so it wasn’t a big surprise.

“Neither wanted a ‘classic' wedding. Aoibheann felt that would have been very stressful and expensive. They wanted something simple just for them. Her Derry friends organised a mad ‘hen-Zoom’ party the week before which was wonderful and it allowed friends from all over the world to participate. I lasted a couple of hours but it went on for several.

“They were married by their local Mayor. I don’t think I would have gone if there had been no Covid as they wanted it just for them.

“There was no live link, she What’s Apped me with photos soon after. I was sleeping. They got married at 9.00am which was 1.00am. in Derry.”

So, the big question is... what does Daisy think of her new son-in-law?

She said: “Raffy is wonderful - a very gentle, quiet, hard working man, who adores her and is a very calming influence on her, too.

“He’s visited Ireland twice over the past years and went to Australia with Aoibheann to celebrate my 70th in December 2019 – he had never been out of the Philippines until he met Aoibheann.

“They are now about to embark on a new adventure. Unfortunately, there’s little work in the Philippines, due to Covid, so   they’re soon coming to Ireland, with their dog, Conan, as Aoibheann has been offered a job in Waterville, Kerry, starting in May.

“I’m delighted, even though it’s at the other end of Ireland, at least it’s on the same land mass as me.”
Daisy conceded she was apprehensive when Aoibheann first went to Bali as she was travelling alone, but was 'happy as she was following her dream.'

Daisy added: “She was pretty grounded so I trusted she’d be OK. As a parent I reckoned my role was to help my wee’uns gain their wings. So, of course, they’re going to fly.

“Her elder sister, Kate, is 16 years older. She went to Australia after uni, so maybe she had an example there. Her brother, is a marine biologist in Scotland.”

Daisy said Aoibheann first 'took to water' when she was just eight months old when she into the sea in a safe bay in South West Donegal where she is originally from.

Daisy added: “She swam with City of Derry, was on their swim team and competed a lot with them during her primary school (the Model) and then when at Oakgrove Integrated College.

“Her big sister, Kate, lives on the Gold Coast, Australia, so when Aoibheann was eight, we and her brother Ruadhán, who was 11 at the time, visited her The highlight for Aoibheann was snorkelling on the Great Barrier reef from Cairns.”

She added: “She went to Mozambique one summer to tag whale sharks on a volunteer programme, set up by the university as she had to learn how to dive. From then on, her dream was to dive more.

“When she graduated she headed to Bali to do her Dive Masters training. She then found a dive instructors’ programme on Phuket, Thailand, that she liked and so trained there to be an Instructor. She stayed there for a few months, after completing the training, to teach and to learn more from her trainers.

“She came home in the Spring of 2013, worked in Peadar’s while she thought 'what next?' That September she got a job in El Nido, on Palawan, Philippines, as a dive Instructor working for Submariner Diving Centre. She met Raffy there, who was also working for SDC. Three years later they decided to look for something different so they were offered jobs with Marine Conservation Philippines (MCP) on the island of Negros Oriental. There, she trained the volunteers who came to work for MCP. They had 35 at any one time from all over the world living with the staff at their base.

“As well as working on Conservation. She upped her skills - qualified as a master dive instructor, worked as a Green Fins assessor, got a Tec dive qualification, too. She developed her photography skills and set up her own website.”
The last time Daisy saw all her children was during a visit to Kate in December 2019.

“Ruadhán, came, too, with his partner Helen. He’s a marine biologist who works for Marine Scotland. They are hoping to get married in Scotland this coming June, after two postponements due to Covid.”

So, Daisy would appear to be faced with a dilemna – does she buy a hat or a diving suit!