The South Derry Down's Syndrome Group are celebrating their 40th year in 2021. 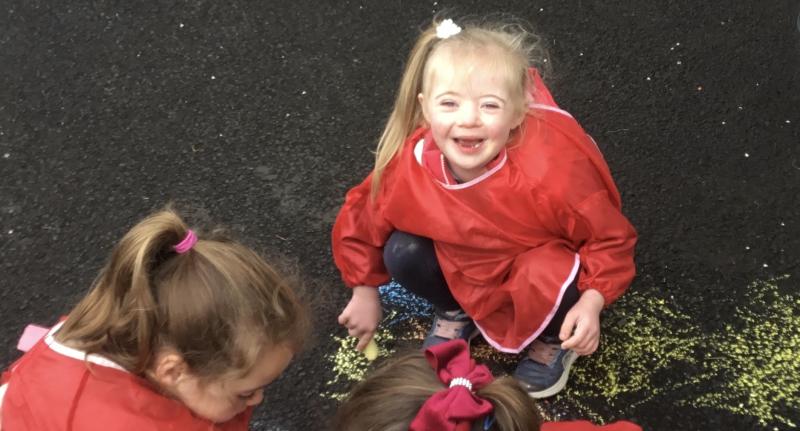 ALL SMILES: Katie in her element at St Brigid's PS Tirkane/Bunscoil Naomh Bríd.

As South Derry Down's Syndrome Group enter their 40th year, Liam Tunney spoke to Chairperson Donna Murphy about marking World Down's Syndrome Day, the available support for parents and how her daughter Katie is thriving at a local primary school.

Donna Murphy describes the first year of her daughter Katie's life as 'a complete blur'. It was a blur that included Katie undergoing open heart surgery in London and being fed through a tube.

When she spoke to the County Derry Post last week, Donna's daughter had just got on the bus to go to St Brigid's PS/Bunscoil Naomh Bríd in Tirkane, where she is thriving in Pimary One.

Her smile modestly plays down just how much work has gone in to Katie's early years.

“When Katie was born, everybody was expecting her to go to the special school, but I never commented on that, because I didn't know how much help she would need or what her ability would be,” she said.

“She attended the pre-school when she was 2 years and 10 months at Stepping Stones, and they've really been fantastic.

“If you engage with her, she's mad to learn. She's not able to learn as quickly as the rest of the class, but she's doing her words and numbers. She's learning, she's not there to be babysat.

“I'm not saying she's a model child. There are wee behaviour issues, but she's probably better in the classroom than she is at home!” 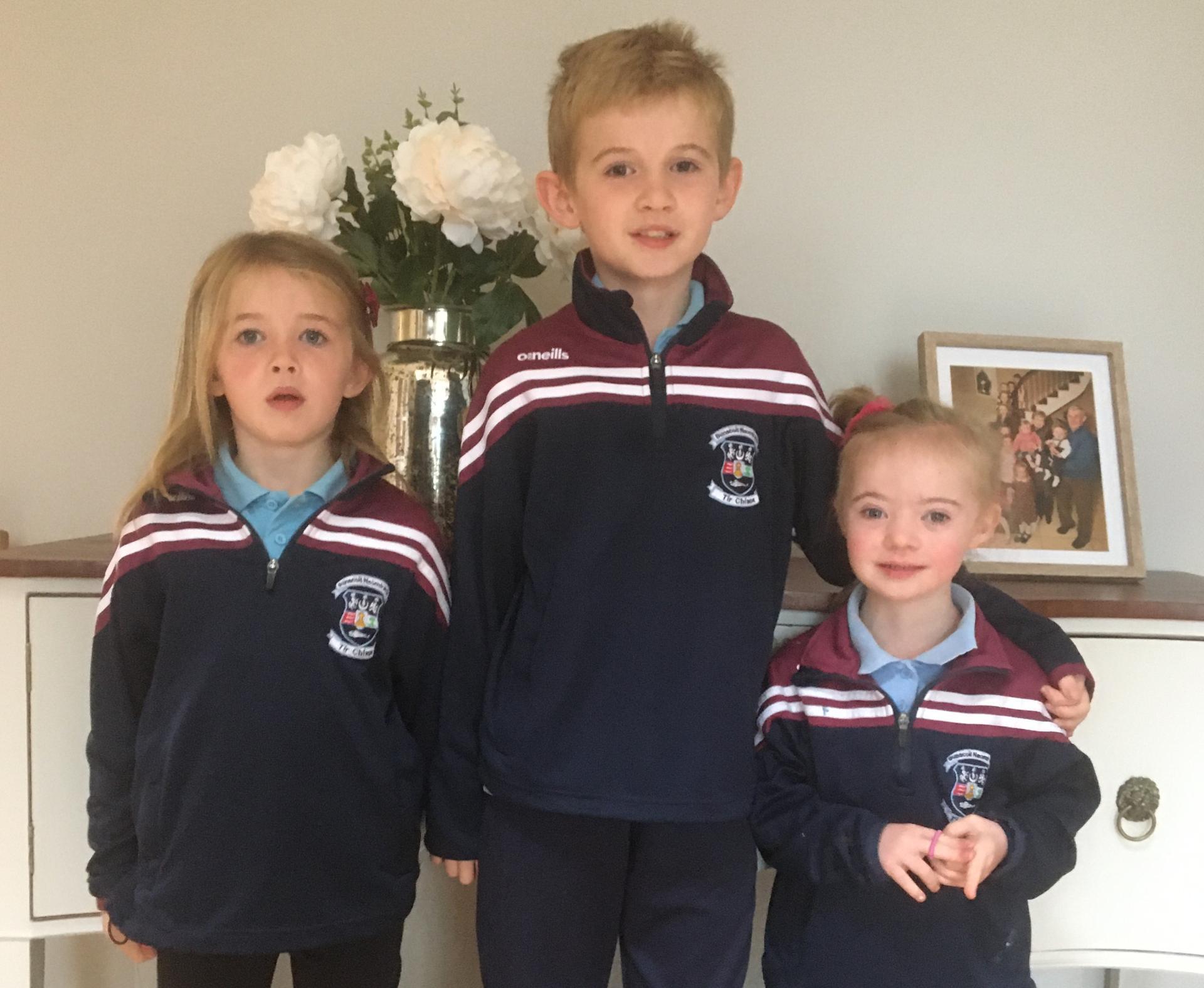 Katie ready for school with her brother Donal and sister Margaret.

Katie's current teacher, Mrs Leisa Convery, first got to know her when she was attending the school's play group, which is on the same premises as the school.

“After 20 plus years in the teaching profession, Katie has renewed my love for teaching,” she said.

“Her arrival has just made such a difference to myself as a teacher, it's added a new dimension to my job and been so worthwhile.

“All the children in the school know her by name. She is loved by everybody, children and adults alike, in school. She just is a wee blessing.”

Leisa's work in the classroom is backed up by the team in school, with training and support provided. She has a liaison officer and has regular speech therapy.

Mum Donna also helped to organise training, and Katie has a full-time classroom assistant to support her learning.

“I could not do my job if I didn't have Niamh [Katie's assistant],” said Leisa.

“She is amazing and Katie and her have a great relationship. Niamh is so gentle with her and does a lot of extended learning with her.

“Katie's mammy organised some training to begin with; training on Numicon and the way children with Down's Syndrome learn.

“That took away that apprehensive thing about how to help Katie best. Once we got that under our belts, we were ready to rock.

“Katie is expected to muck in like the rest of them and make sure she's doing the same. The curriculum is there for her to access the same way as any other child.” 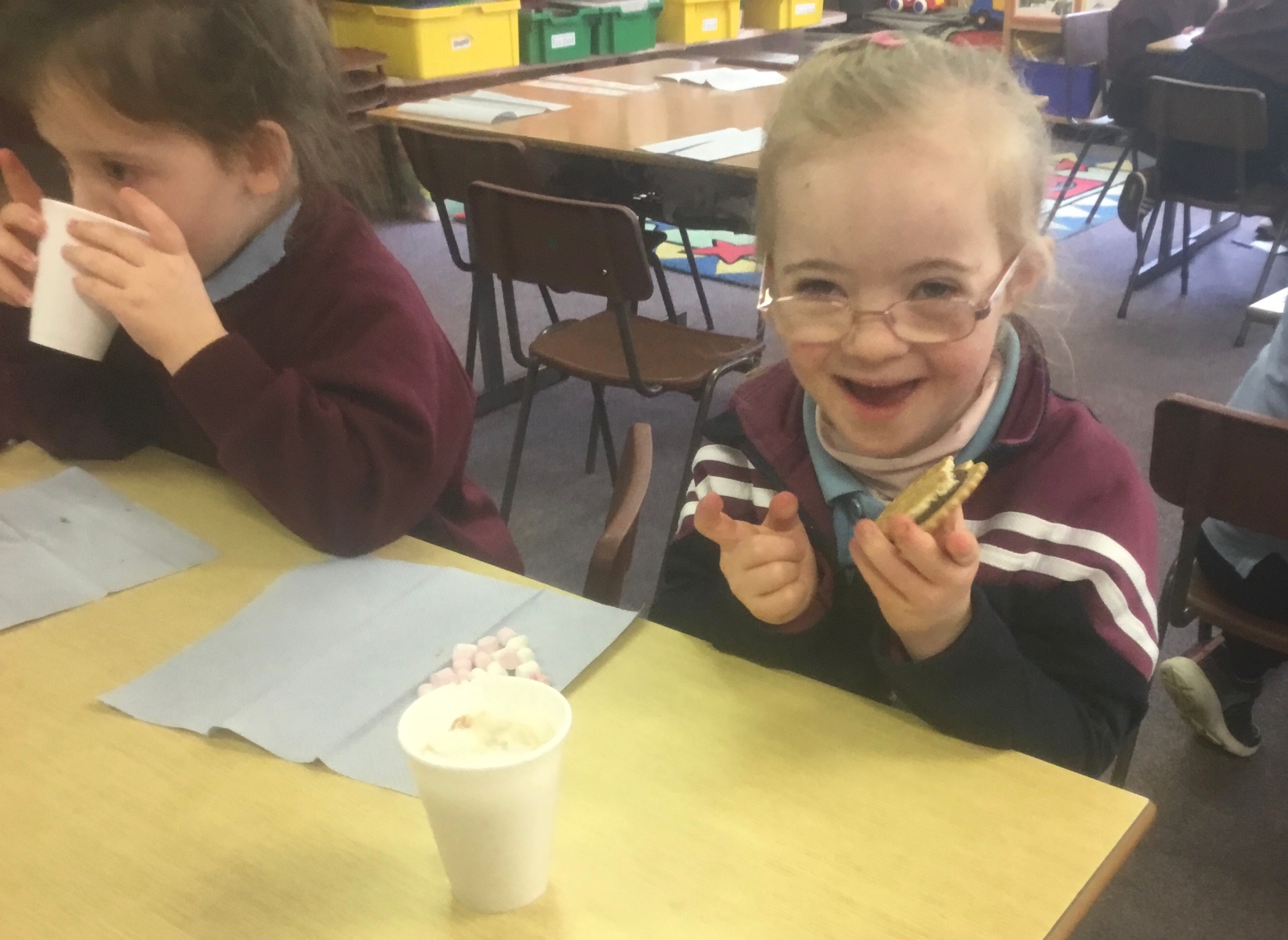 Enjoying a treat at school.

As a physio, she knew the importance of early child development, and after linking up with the South Derry group, she set about adding those services to their provision.

“I took over as Chairperson two years ago, and we'd started bringing in those things after that. We try to support children when they are born; with a welcome pack and information for parents,” she said.

“It's not just a token gesture. I want to let them know they can do things for their baby to help make them the best they can be and give them the right advice straight away.”

Parents of children with Down's Syndrome have come to expect a misplaced look of pity when their child is diagnosed, but Donna and the group are hoping to change that perception by raising awareness.

“The input you give for the first couple of years really can help your child. A child with Down's Syndrome is really open to stimulation, and if you give them the right input, they usually respond.

“We have speech therapy groups, music therapy groups, yoga, pilates, cookery. A youth club is run during the year by the Down's Syndrome Association Belfast, but it stops from June until September.

“We filled that gap and ran summer schemes and youth clubs. We try to provide for all ages.

“I might be the ideas person, but our current Secretary, Arlene McEldowney, makes everything happen, co-ordinating with up to 50 families in our group.

“We've run training courses for parents, professionals, teachers, trying to educate people and make them aware of all the things you can do to help babies, children, or pupils to maximise their ability.” 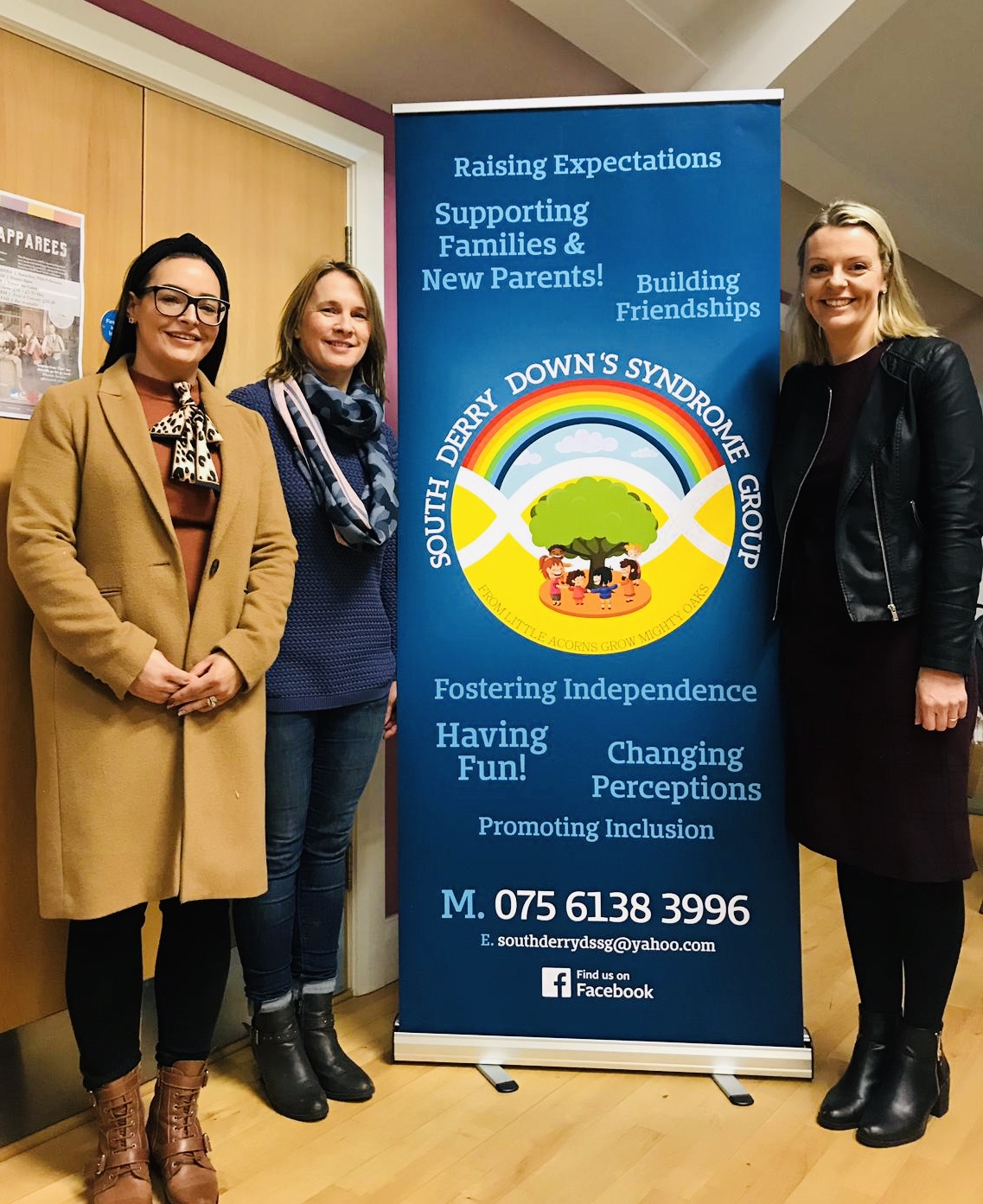 Donna Murphy, along with Arlene McEldowney and Olive Buckeridge from Down's Syndrome Ireland.

Like everything else in its wake, the Covid-19 pandemic has had a huge effect on the activities of the group, with both restrictions and fear of contracting the virus taking their toll.

The community have learned to adapt and are gearing up to celebrate the group's 40th anniversary this year.

“The pandemic has put a halt to loads of things, but at Christmas we made a big fuss, got a calendar and photos done, got a half-zip made with our new crest and a few gifts,” she said.

“One of the parents, Donard McErlean, went round dressed as Santa and handed it over at the doors. The activities we had planned, most have stopped. We're hoping to make up for lost time.” 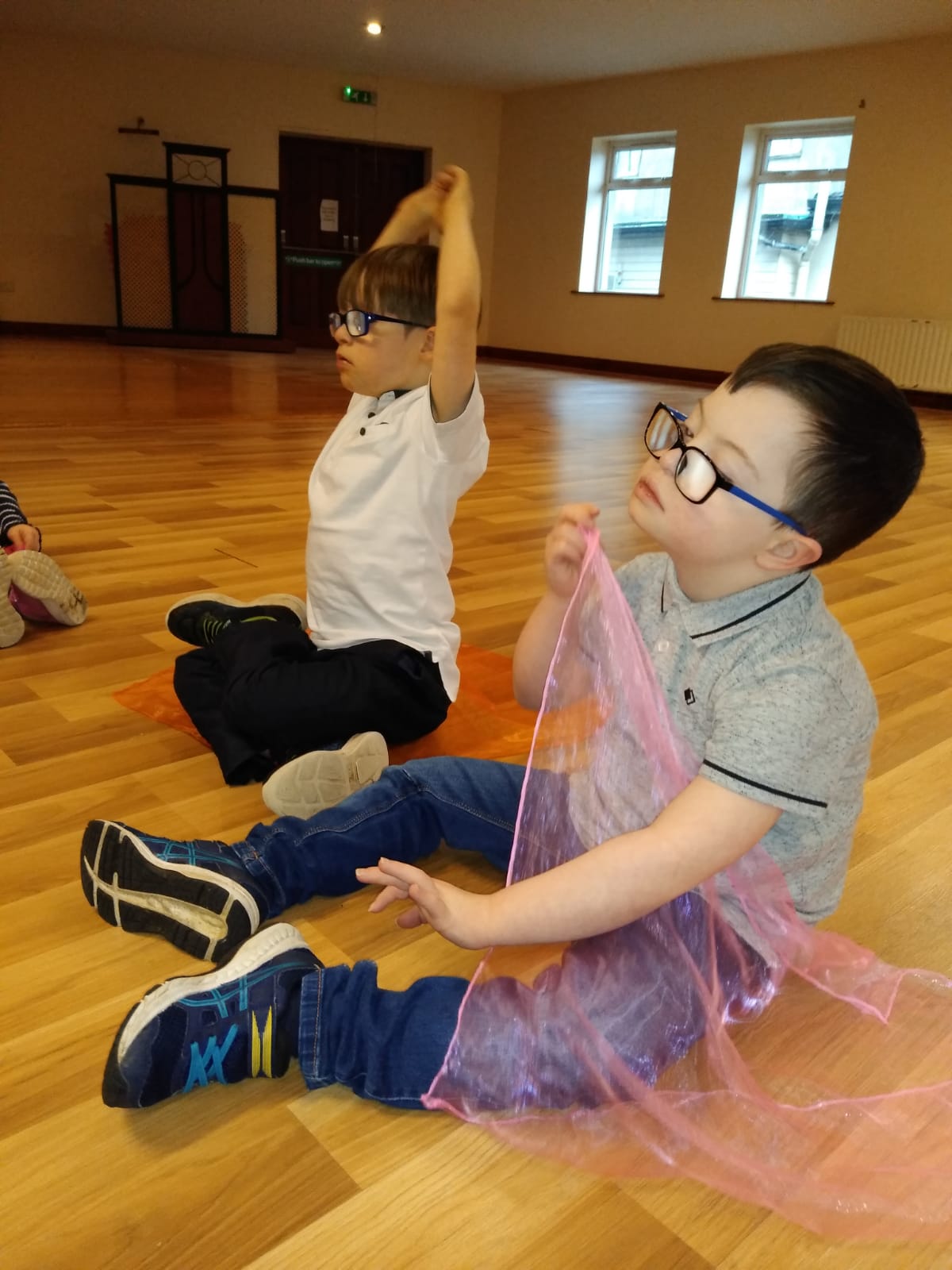 “It's the day when you celebrate and point out all the positives. If you have a child with Down's Syndrome, World Down's Syndrome Day is your day,” said Donna.

“You see all the support, locally and around the world, and it helps you feel part of a community. It's not to be pitied.

“When we were collecting money for extra speech therapy, one man said, 'I often think they're an awful burden on the family'. I was totally gobsmacked, but I suppose he just spat out what he was thinking.”

“Katie is no burden and is just as precious as our other two children. If anything, we appreciate the little things and achievements even more and don't just cruise through life.

“In generations gone by, and not that long ago, people with Down's Syndrome would not have been educated. There was no thought of employment and they were usually hidden away.

“With every year that passes, the expectations with a child born with Down's Syndrome are rising all the time.

Locally, the group are marking the event with an online pizza night. Pizza kits have been delivered to families so peer groups can link up on Zoom to create their pizzas.

A T-shirt has also been produced to go along with the existing half-zip to foster togetherness, while a number of fundraising initiatives are also planned.

Maghera man Joe Mallon, whose nephew Éanna is the youngest member of the group, intends to run a marathon around nearby Garvagh Forest. To date he has already raised almost £10,000. 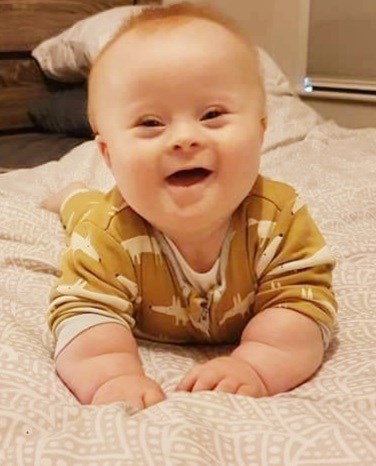 Joe Mallon is running a marathon in support of his nephew Éanna, who is part of the group.

The support of the group and the local community means Katie has benefited from a wealth of social interaction, but the strength of her family unit around her has also helped.

“She has 15 or 16 cousins around the same age surrounding her and 14 of them are girls, so she has loads of wee buddies around her and they treat her the same,” said Donna.

“Every time she comes out with something unexpected, my heart just melts. She is due to join Slaughtneil U6 camogie training this summer all being well.”

Since 1981, the group have performed a vital role in the lives of those with Down's Syndrome in the South Derry and Mid-Ulster area, and Donna is keen to pay tribute to those who started the journey.

“The group was started 40 years ago by my good neighbour and friend Margaret Harkin and Cissie Neeson, who wanted something more their children,” she said.

“Now Arlene McEldowney as Secretary, Maureen Quinn as Joint Treasurer and myself are all parents to young children as Margaret and Cissie were 40 years ago.

“Over the years many other parents have kept the group thriving. I hope they would be proud of how we have carried on their legacy.”