Local artist Conor Larkin has been searching for deeper meaning in the children's political portraits. 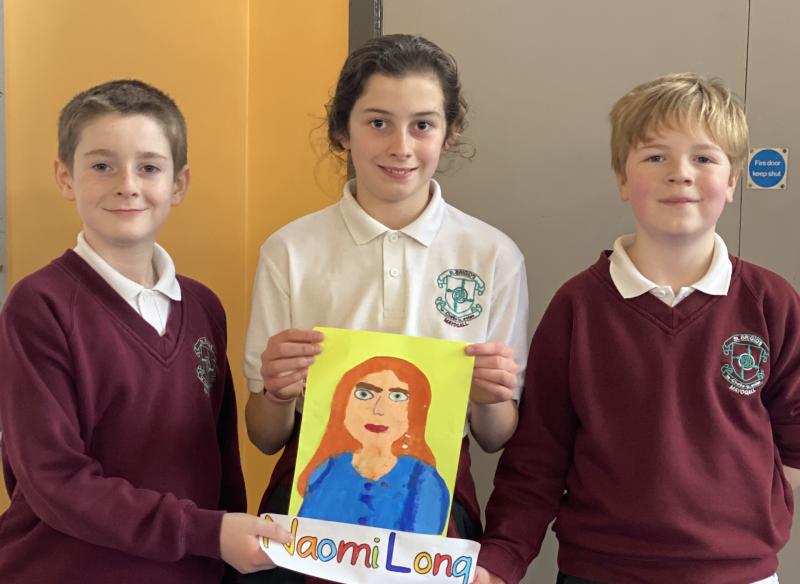 The pupils of St Brigid's PS, Mayogall, have been making headlines all week with their colourful depictions of the Northern Ireland Executive.

Education Minister Peter Weir tweeted a picture of the paintings after he visited the school last week, and the portraits quickly went viral, appearing on BBC's The View programme.

The Alliance MLA felt the work captured her essence perfectly.

“I love my wonky eyebrow! It looks like I'm a bit cross about something which I usually am! Fantastic work and say thanks to all the young artists!” she said.

Finance Minister, Sinn Féin's Conor Murphy, took time to write to the pupils and express his gratitute, saying the painting was 'an improvement on the real thing'.

Mr Murphy also told the children that one of their local heroes had held pride of place in Stormont for years.

“The late Martin McGuinness, who was Deputy First Minister, had in his office a large photograph behind his desk in Stormont Castle of someone who attended your school,” he wrote.

“It was of the 1993 All-Ireland winning captain, Henry Downey. In an office which had photographs of world leaders including Nelson Mandela, the photo of Henry Downey of Lavey had pride of place.”

After the paintings were beamed around the airwaves, requests began to make their way to South Derry and the children have been busy.

The Blame Game's Tim McGarry, Jake O'Kane and Colin Murphy got the full treatment from the Mayogall Monets, along with local councillor Sean McPeake, who helped arrange the visit.

Principal Mary O'Kane said the paintings, and associated publicity, had created a great feeling of positivity around the school.

“It's created a great buzz, which is very important at this time,” she said.

“Following lockdown and the long period of absence from school, it's important that children get a wee boost now.

“It's important for the whole school, but particularly those children who are getting a real buzz out of it at the moment. They see themselves as being pretty famous artists.” 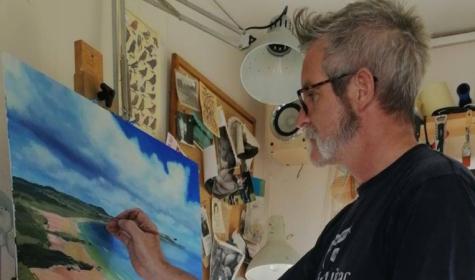 Another famous local artist, Kilrea's Conor Larkin, agreed to give the children's paintings a professional artist's scrutiny for us this week – and he was very impressed! 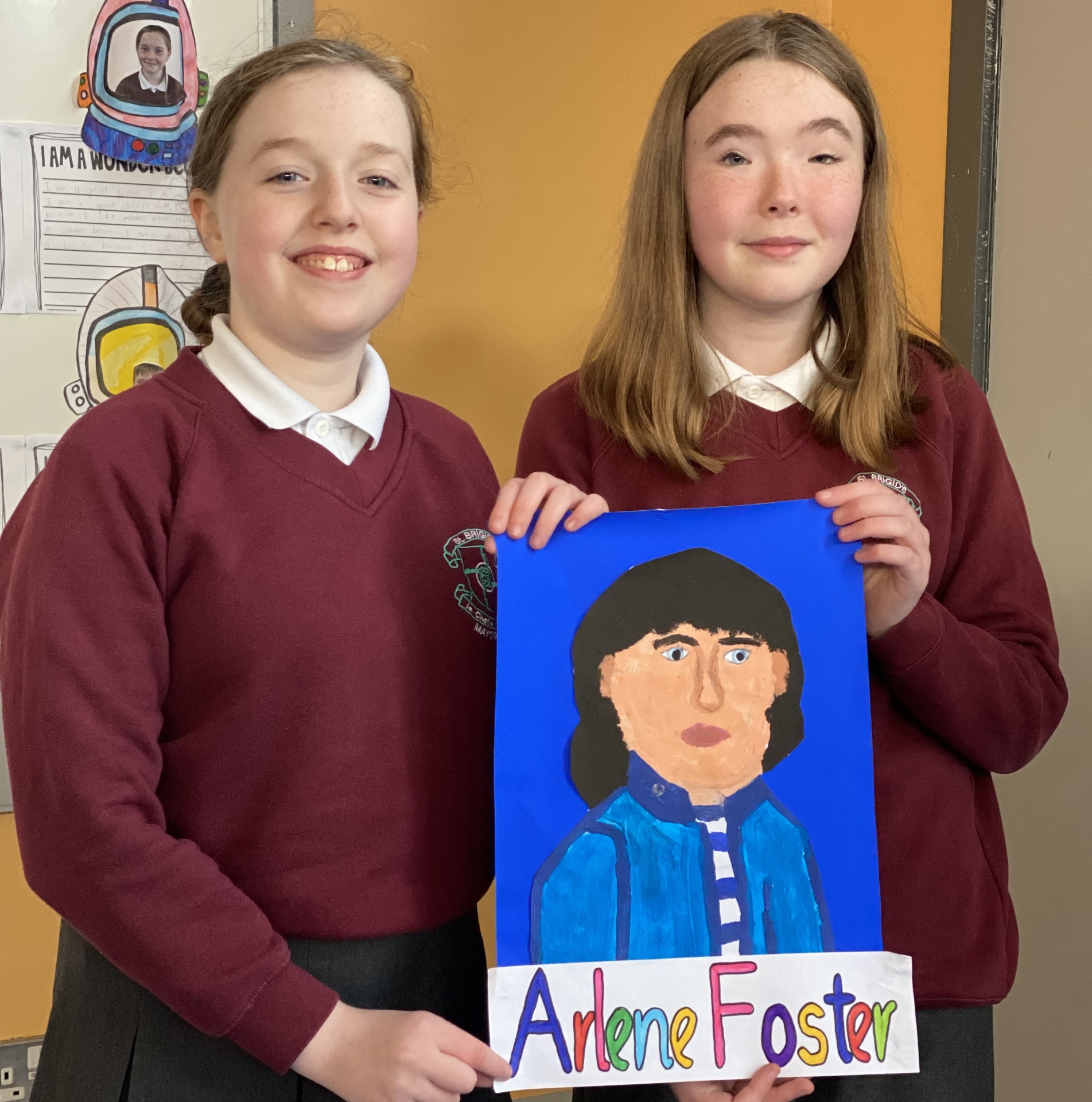 Arlene Foster: The artist has captured Arlene's ‘lockdown coiffure’ – a large, thick plumage of black hair. Arlene is looking away from the viewer, maybe deep in thought or dreaming of an easier time. They have captured a fantastically sombre and meditative state that many artists strive for! 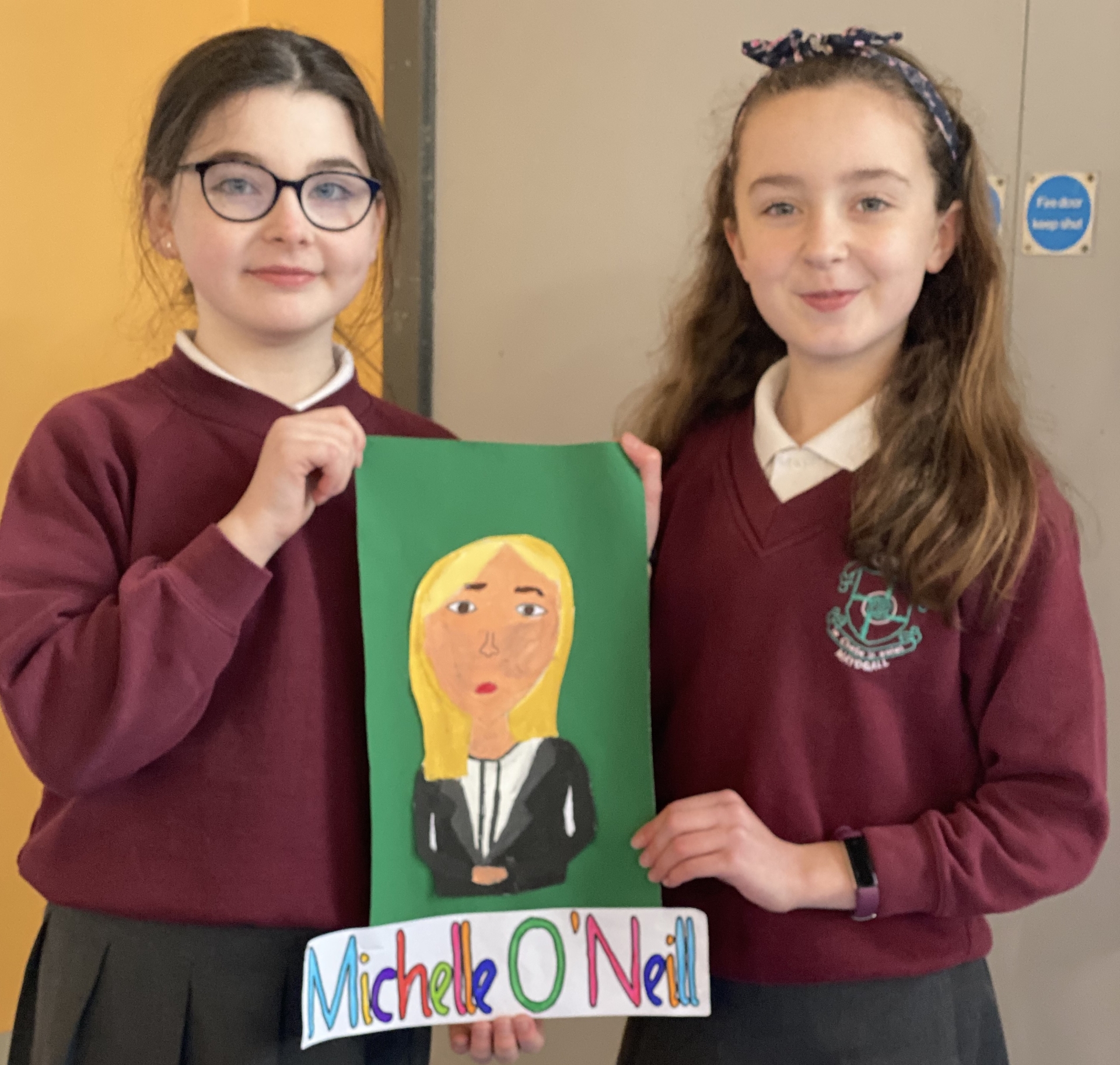 Michelle O’Neill: The subject has been caught in a moment of contemplation or reflection. She appears to be gazing just below the viewer’s eye-line. Thinking hard and remaining very tight-lipped, giving no clue to her inner-thoughts. Her hands are clasped, as if playing her cards close to her chest. 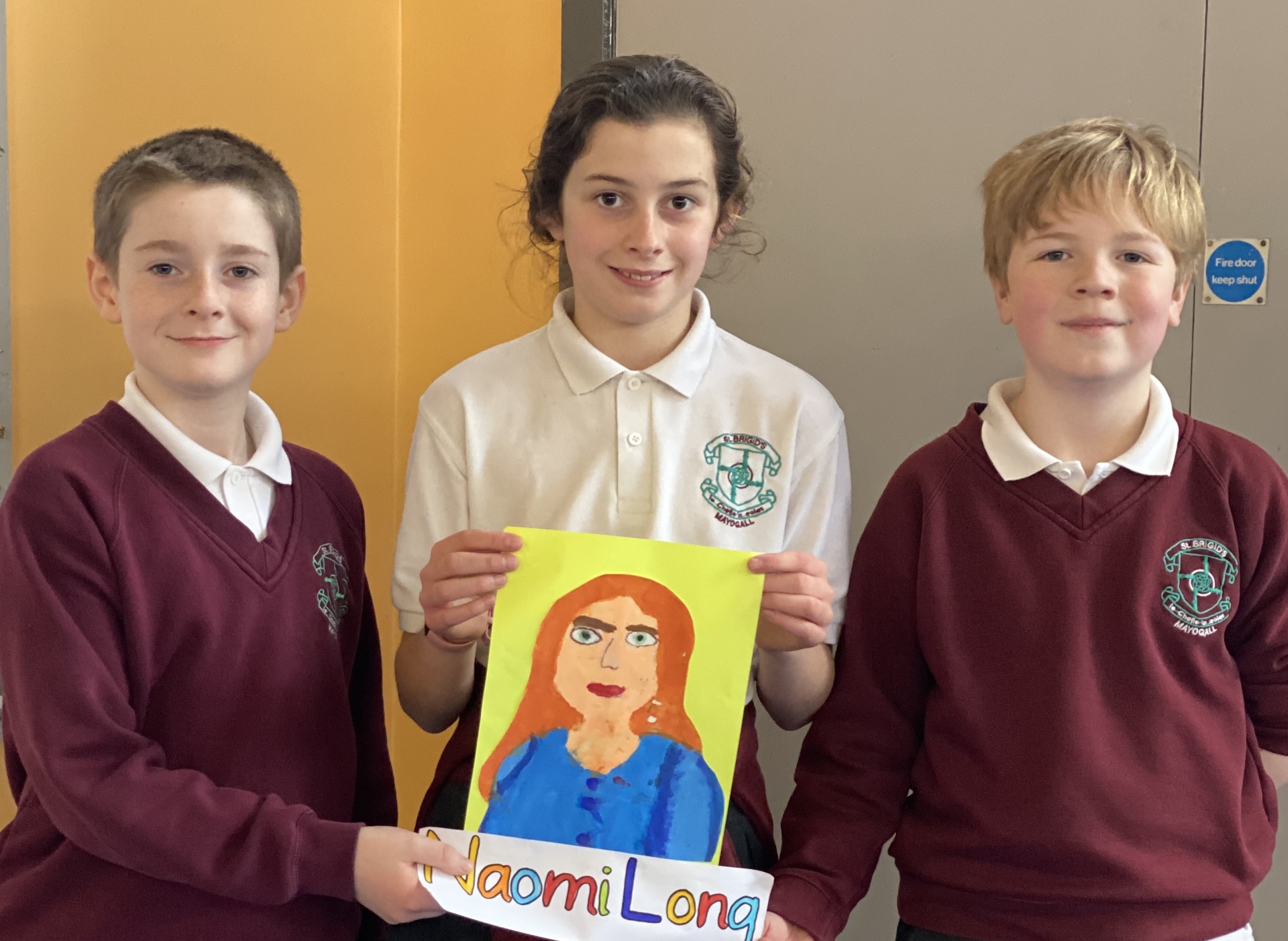 Naomi Long: The artist has gone for a bold palette of contrasting colours. The subject is looking a little bewildered or deflated. She appears to have one hand behind her back, as if not wanting to show the viewer her crossed fingers. Or have we purposely been left wondering if Naomi’s hands are tied? 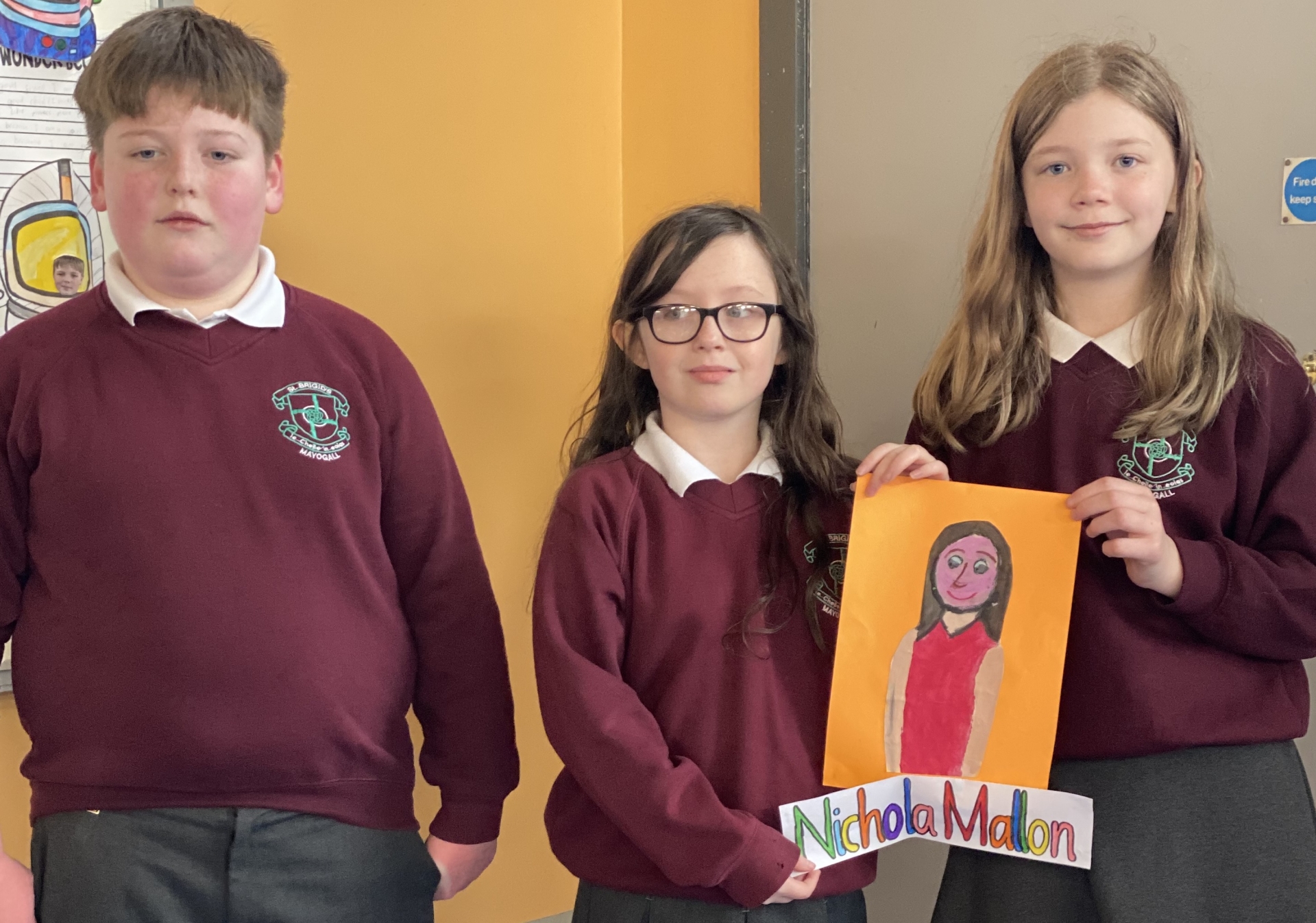 Nichola Mallon: The subject appears very happy or comfortable in her own skin. She stands up straight with her hands by her side, portraying a certain pride. This could be the Mona Lisa of political portraits, with her confident gaze following the viewer around the room. 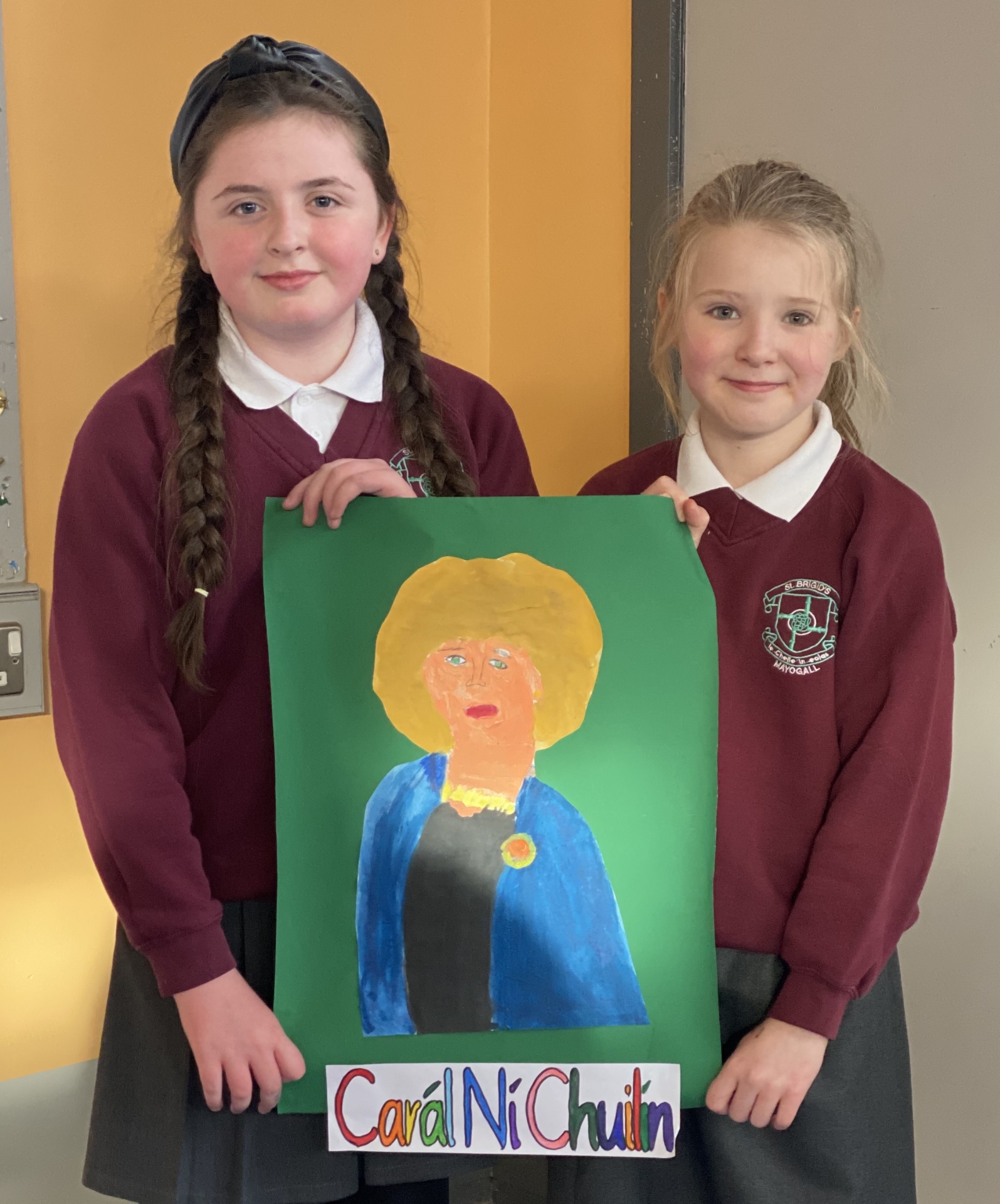 Carál Ní Chuilín: Simple and effective brush strokes have been used to capture the subject’s vibrant hair and expressionless face. The subject stares directly from the canvas, almost straight through the viewer. The artist has done well to capture this moment of determination. 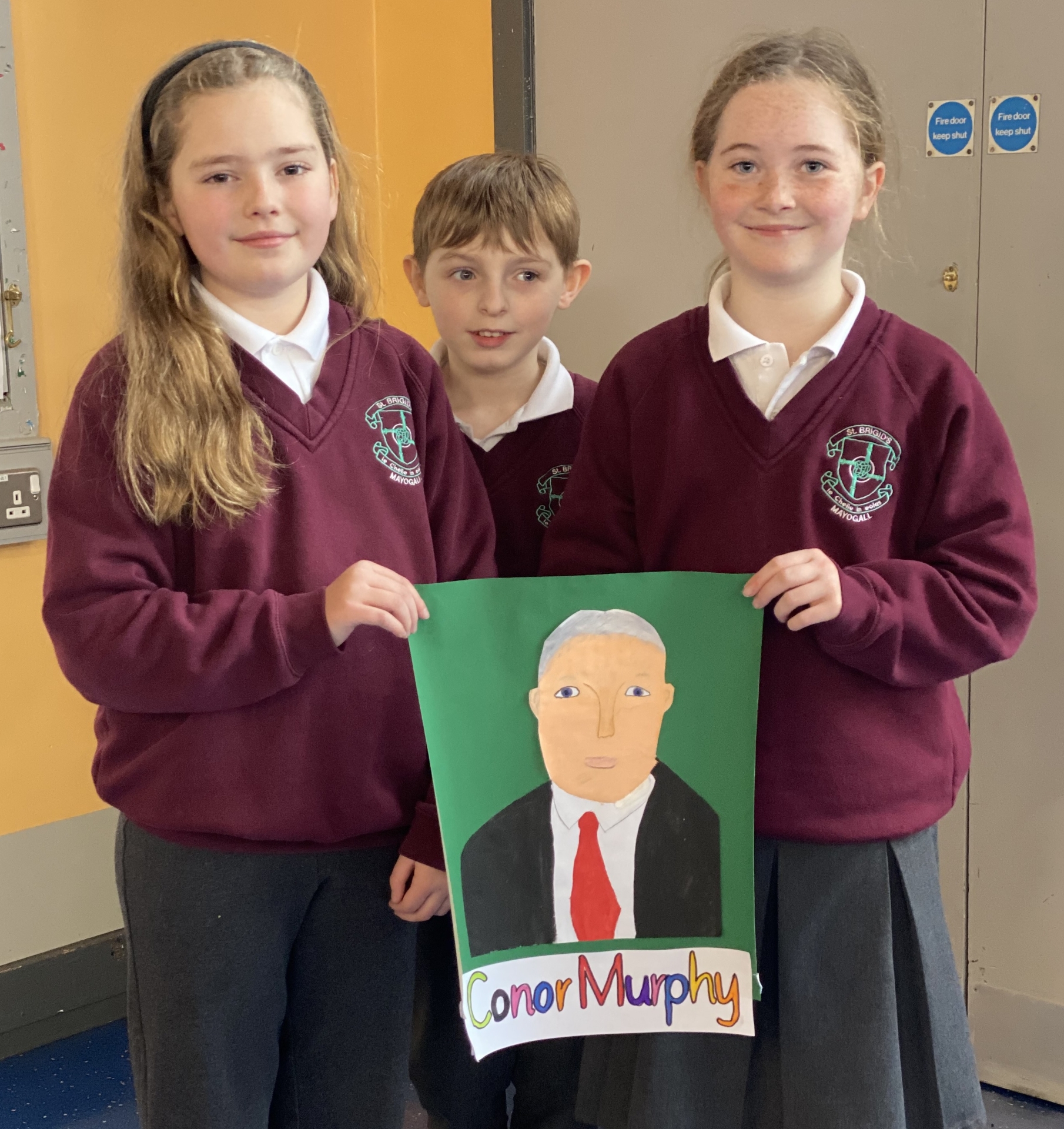 Conor Murphy: The artist has captured this subject well, leaving the viewer wondering ‘what has he just been asked?’. His bottom lip juts out in a moment of deep concentration, staring past the viewer in search of an answer, as the viewer begs to know what exactly the question is. 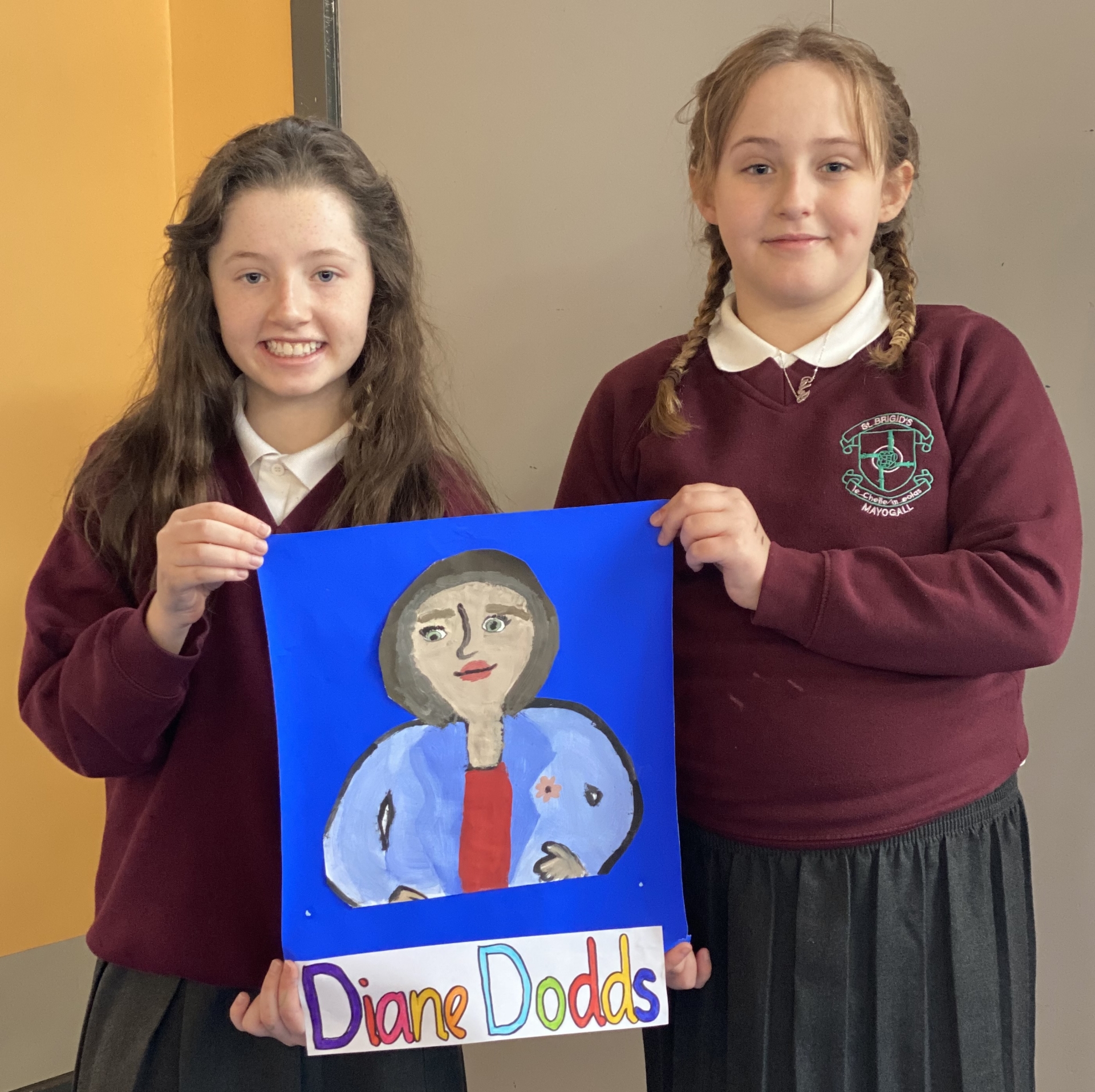 Diane Dodds: A subtle palette of greys has been used to portray the subject’s face, perhaps an indication as to how she is feeling. The subject appears to be smiling, but also looks panicked as she scans her surroundings. 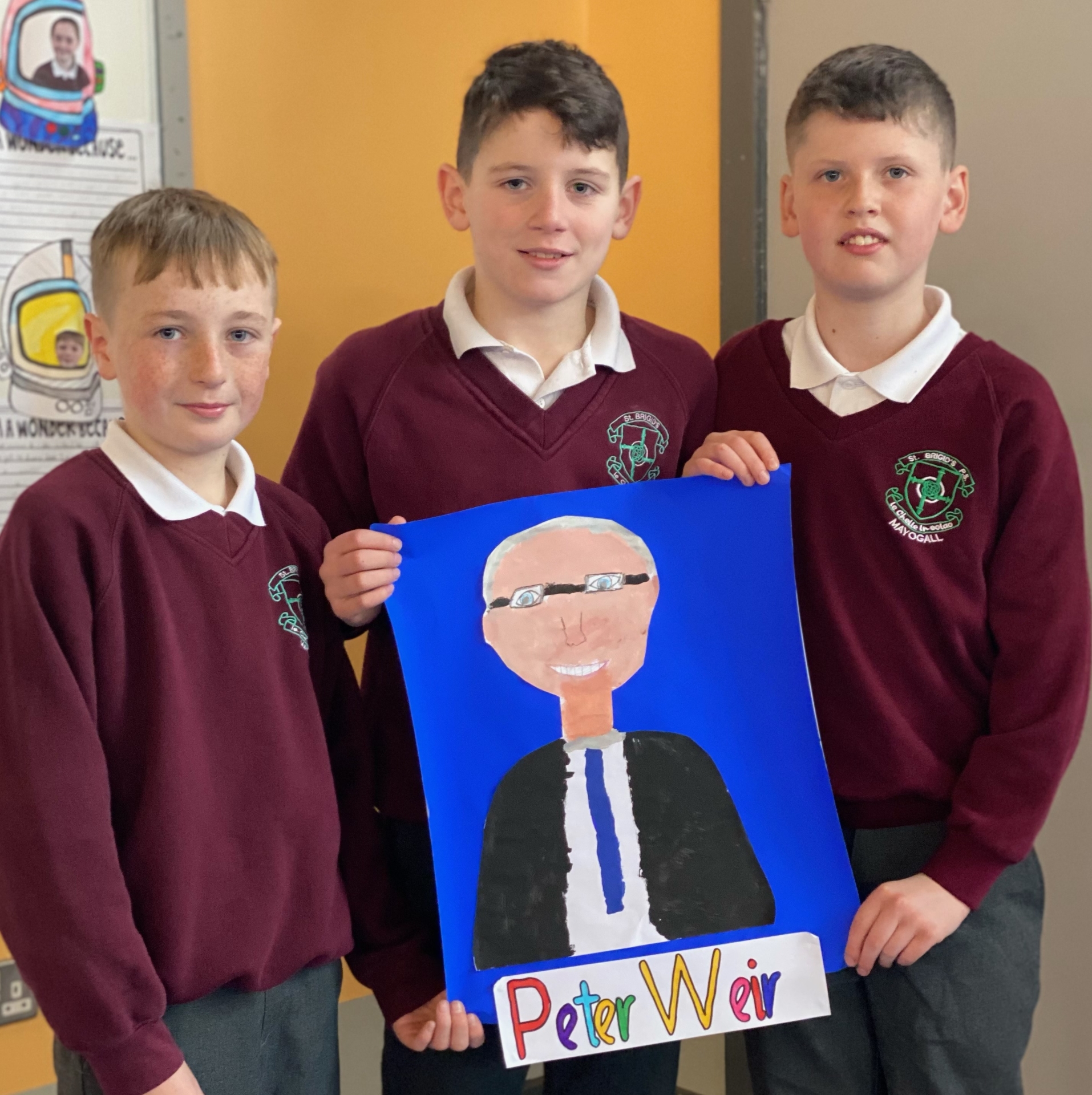 Peter Weir: This subject is portrayed as being happy and almost laughing, leaving the viewer asking ‘what is so funny?’. But, looking behind the glasses and gazing further into his eyes, the viewer soon realises there is no joke here. 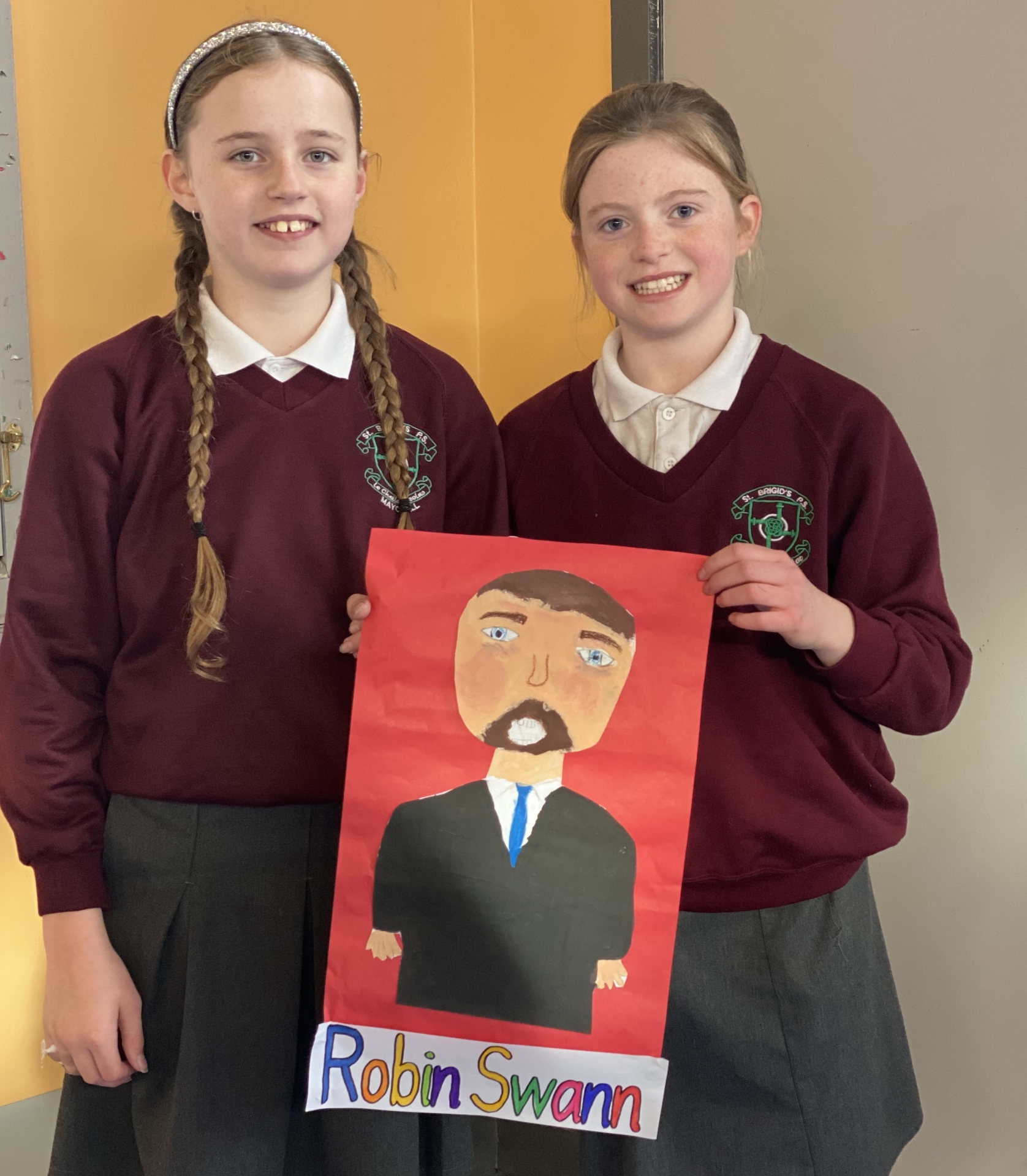 Robin Swann: The artist has really taken the time to depict someone under extreme pressure. His fists are clenched tight, his mouth opened wide as if shouting for someone to listen. But, his eyes look sad and his cheeks tear-stained. His gaze is directed straight at you, as if to say ‘I have more bad news'. 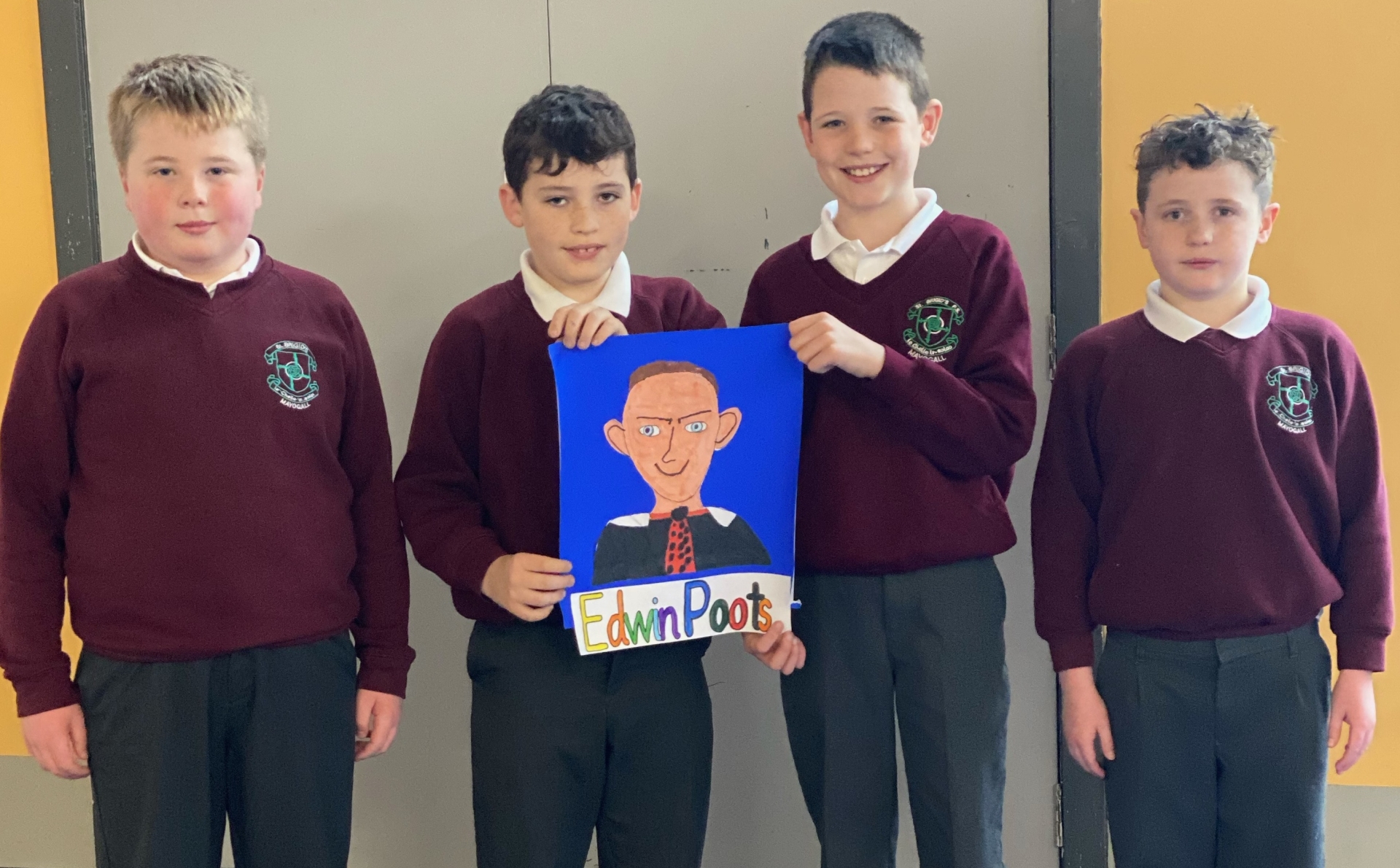 Edwin Poots: This painting shows someone who appears to be very happy with themselves, but look deeper into the subject's eyes and you can see that one eye is looking hard at the viewer for approval and the other is looking back at himself in some doubt. 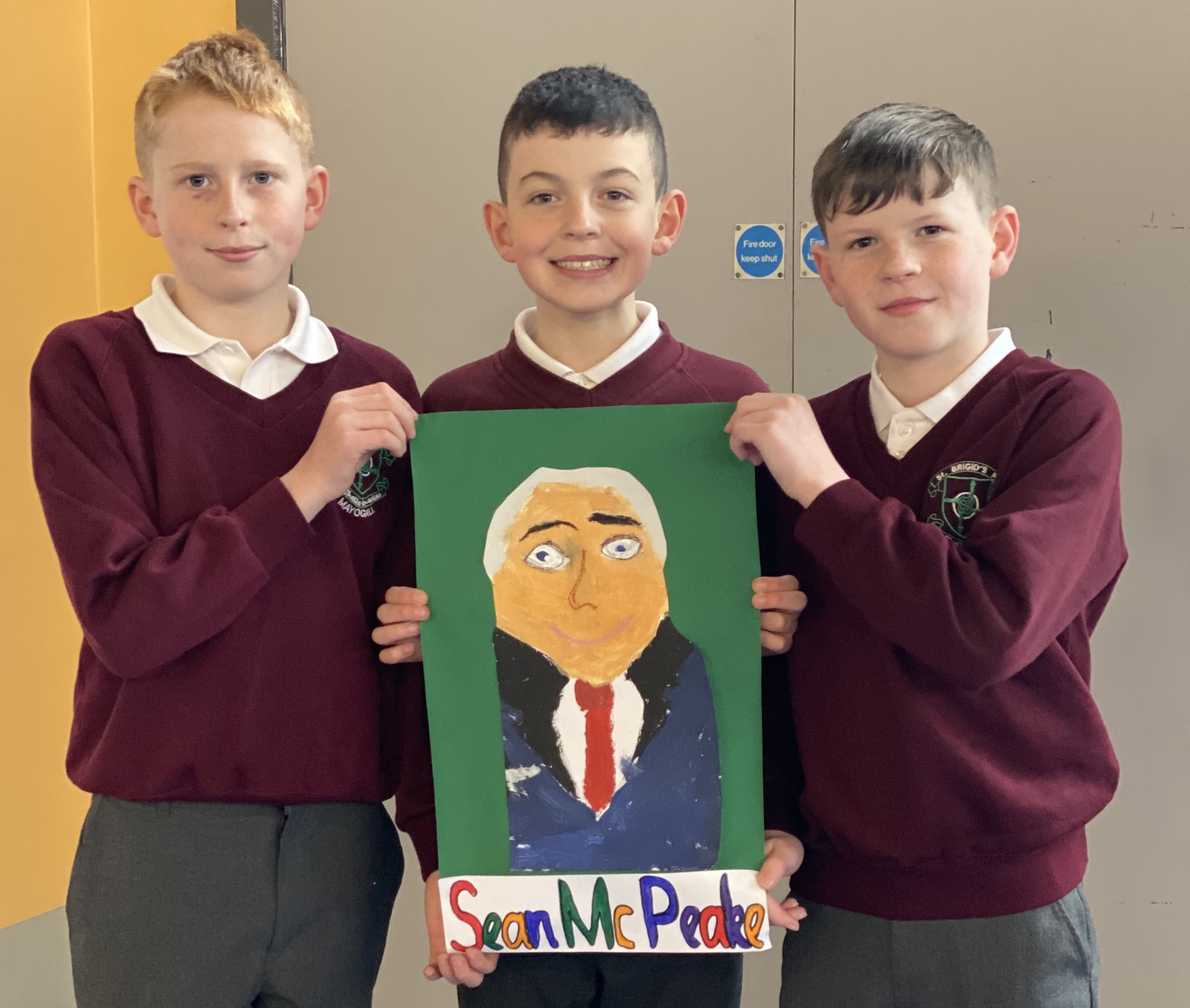 Sean McPeake (local councillor): The Artist has captured the subject wide eyed, maybe in disbelief. The pale hue used for his lips, blend into his skin tone – perhaps the artist is sending the subliminal message that the subject is lost for words. The silvery grey hair gives the subject a ‘worldly wise’ appeal.