The day Bill Clinton came to town: It felt like Derry was finally getting the recognition it deserved 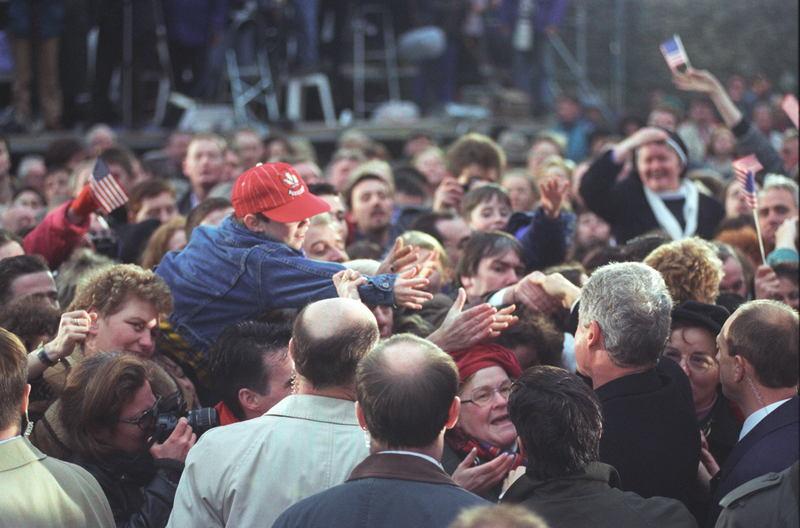 Working as a journalist in the 1990s and early 2000s was to report on events so huge it was clear history was being made.

Unfortunately these tended to be the atrocities whose names are still instantly recognisable for the death and destruction they represented.

Those of us who were on the scene for Omagh, Coshquin, Greysteel and Castlerock will never forget those ground shaking, heart breaking, emotionally scarring horrors.

The outworkings of a savage and unforgiving war.

But thankfully there were other momentous occasions which still stay in the mind for the feelings of elation, pride and hope which they engendered.

And the day the actual President of the United States, Bill Clinton and his equally impressive wife Hillary, came to the Guildhall in Derry is one of them.

On a bitingly cold November day, crowds of people from Derry, Tyrone, Donegal and further afield crammed into the city – their aim to find and defend a good vantage point in Guildhall Square in the hope of getting close to or at least within a sightline of Bill and Hilary.

Behind the walls a makeshift press centre had been created and there the local hacks had a chance to mingle with top political and international correspondents from around the world.

I admit to eavesdropping on conversations to make sure I was following the same angle as these journalism giants. I have never read, re-read and edited my copy more.

Outside as the day wore on and with still no appearance, undulating murmurs of rumours rippled through the crowd periodically – two more hours, half an hour, a while yet, were all estimates of when we might expect the arrival.

In the meantime those gathered occupied themselves by periodically chanting “We want Bill” which carried on until he finally arrived and, after a quick meeting in the Guildhall, he stepped out onto the Square and up on the stage.

At every part of his speech where he praised John Hume and talked about peace coming to Northern Ireland, the crowd responded with cheering and applause.

But the biggest cheer came when he told them “Daily life has become more ordinary but this will never be an ordinary city!”

I was the editor of the North West Edition of the Belfast Telegraph at the time – one of only three Northern Ireland daily newspapers and therefore given a little preferential access.

I don’t know who the Newsletter reporter was that day or where they were placed, but the Irish News got a place on the podium within flag-waving distance of the main stage where Bill, Hillary, John and Pat Hume, the Secretary of State Sir Patrick Mayhew as well as the late Mayor John Kerr and his wife Carita were gathered.

I had an invite to a private event in the Guildhall after the main speeches in the square.

This was where academics, business and civic leaders came to mingle and meet with the President and First Lady.

I didn’t get close enough to shake his hand but I was in the orbit and it was just a bit overwhelming.

That famous Southern drawl seemed so out of place in the crowd of lilting local accents and yet so familiar.

People knew he had been a key player in the road to the Provisional IRA ceasefire on an August night in 1994.

There was a feeling of welcoming someone who understood and appreciated Derry’s pivotal role in leading the way on the road to peace.

We didn’t know then that the horror of Omagh was still to come or that there would be many other challenges, but on that bright autumn day in the Guildhall Square with the eyes of the western world focused on us it felt like Derry, so long the poor relation, was finally getting the recognition it deserved.