The day Bill Clinton came to town: My famous Journal front page that President Clinton got to take home 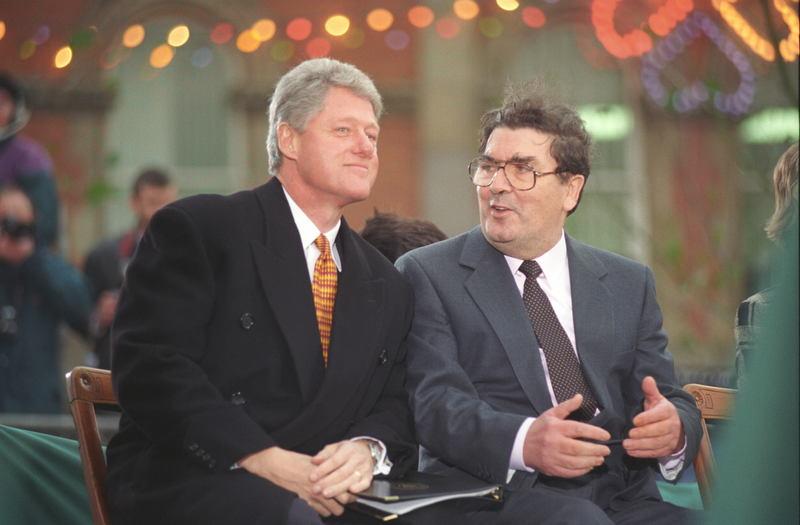 Bill Clinton with John Hume in Guildhall Square on that famous day in 1995.

The great thing about being a journalist is you really never know the next story you are going to cover and there have been a few.

The historic visit by President Clinton to Derry 25 years ago certainly ranks among the most memorable and we both made the front page of the Derry Journal the next day!

Don’t get me wrong, it’s not as glamorous as it sounds.

I was the fresh-faced local reporter dispatched from the newsroom by the editor to get what’s known in the trade as the ‘colour piece’.

No, I wasn’t backstage with the dignitaries.

My press pass that afternoon only needed to get me into Guildhall Square where I was embedded in the pulsating crowds waiting for the President to deliver his message of hope – this was history unfolding in a city steeped in history and on the cusp of a new era of peace spurred on by the American administration.

The atmosphere of excitement for the high profile visit by the Clintons to help nurture the fledgling peace process was palpable and its significance could not be underestimated.

The crowds chanted “We Want Bill!” and thousands of American flags were waved frantically as they waited to hear from the charismatic third-youngest President in US history.

Stars and Stripes hung from top floor windows of local businesses and Secret Service personnel were visible on surrounding roofs while the President’s security agents stood out a mile talking into their sleeves.

During the ‘warm up’ the crowds were told the cameras and eyes of the world were on us. And the city stepped up as always to show how it welcomed its guests long before the term LegenDerry was coined.

It’s impossible to recall that famous fixture without also recalling the poignant words of the President when he spoke of how Hillary, the First Lady and himself were 'proud to be here in the home of Ireland's most tireless champion for civil rights and its most eloquent voice of non-violence, John Hume'.

The keynote speech may only have been ten minutes long but it packed a powerful punch whilst using language everyone assembled could understand.

“All of you know that this city is a very different place from what a visitor like me would have seen just a year and a half ago, before the ceasefire.

“Crossing the border now is as easy as crossing a speed bump. The soldiers are off the streets. The city walls are open to civilians. There are no more shakedowns as you walk into a store. Daily life has become more ordinary. But this will never be an ordinary city.”

His most important message that even deep divisions can be reconciled still resonates a quarter of a century later.

Three of Derry’s famous sons referenced by the President are sadly no longer with us – Nobel Laureates John Hume and Seamus Heaney and playwright Brian Friel.

The euphoric report that I filed proved elusive this week but it made the front page splash with a prized by-line.

I seem to recall that a special personal copy was ordered hot off the press and speedily framed so it could be presented to the President by local civic leaders as a memento of his visit.

So, if anyone out there has a spare copy please let us know – otherwise I might just have to give Bill a call!

Oh, and yes, I did get to shake his hand before he left; unfortunately, there doesn’t appear to be a photo of that starstruck moment available now either but believe me, it happened.