Maghera woman embracing the positives of losing her hair

The local hairdresser has embraced her journey with alopecia. 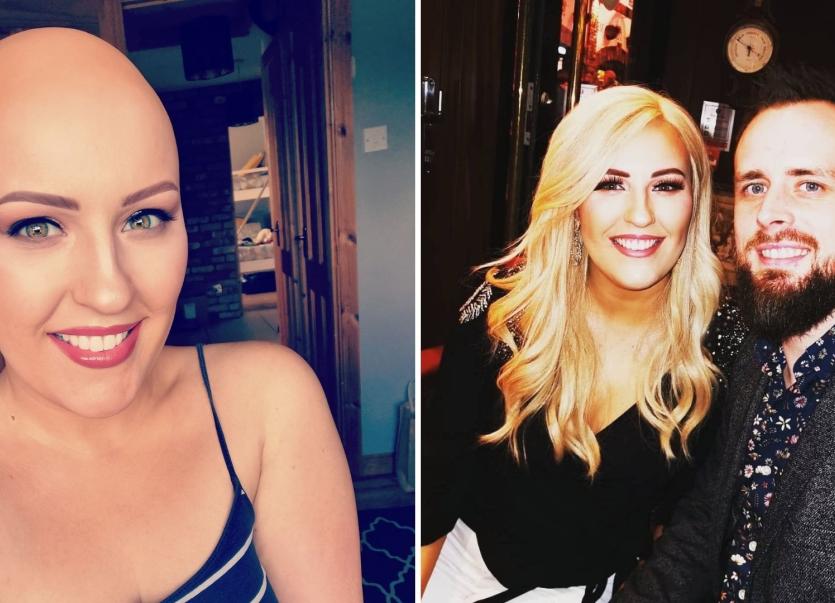 Niamh Hegarty pictured on her Instagram (@thebalddoll) and with partner Christopher Kiely.

Losing your hair can be a traumatic experience. Liam Tunney speaks to Maghera woman Niamh Hegarty, who is sharing her story to emphasise the positives to losing her hair through alopecia universalis.

According to European data company Orphanet, Alopecia universalis, the complete loss of hair on the scalp and the body, affects 1 in 4,000 people.

For Maghera hairdresser Niamh Hegarty, the period of time between noticing the first bald patch to all her hair falling out was just three weeks.

“The patches are really common, but to see someone's hair completely fall out in three weeks is unheard of,” she told the County Derry Post.

“I was getting ready to go to my friend's wedding, and was sectioning my hair to curl it. I noticed on the left hand side, towards the back, what looked like a bald patch.

“I didn't think too much of it, because my sister had been suffering from alopecia areata (hair falling out in small patches) for about two years, so I thought I was going to get patches now too.

“She lives with it and has had patches come and go. She'd lose them and then within weeks, they'd grow back again. Because of her, I wasn't really shaken by it.”

Within a few weeks, however, the problem was becoming too great to ignore, to the point where Niamh was afraid to even brush her hair.

Another wedding, this time, a childhood friend's, was just days away when the creeping panic of losing her hair finally caught up with her.

“In the shower, I thought my hair felt tattier than normal, but it wasn't until I came out and took it out of the towel that I realised how bad it was,” she said.

“It was the mixing of the loose hair and the hair that was still attached to my head that was creating the matting, because I was rubbing it with the shampoo and knotting it all up.

“That was the first time I really felt panicked, because the amount that came out of my head was insane. That was on Monday, and by Wednesday it was apparent that my hair was rapidly falling out.

“Patches were forming at the front of my head and within hours they would be merging with other patches.

“I was too afraid to wash my own hair again. I was taking panic attacks, so I contacted my hairdresser, Bronwyn, who told me to come out and she would wash it for me.

“I went to her and she washed and blow dried it with volume, so it didn't look as thin as what it had done.

“I was supposed to go to my childhood best friend's wedding on the Saturday and my plan was to go to Bronwyn on the Friday, who would wash and blow dry my hair.”

Bronwyn made time for Niamh at 10.00pm that night, long after her other clients had gone home, but it was while in the chair that she experienced the most traumatising moment of her journey.

“I got up from the basin and looked in the mirror. Honestly, the image is ingrained in my head, it was so traumatising. It was like looking at an old man,” she said.

“There was no hiding it. Headbands weren't thick enough and I ended up not being able to go to my friend's wedding, because I literally had nothing.” 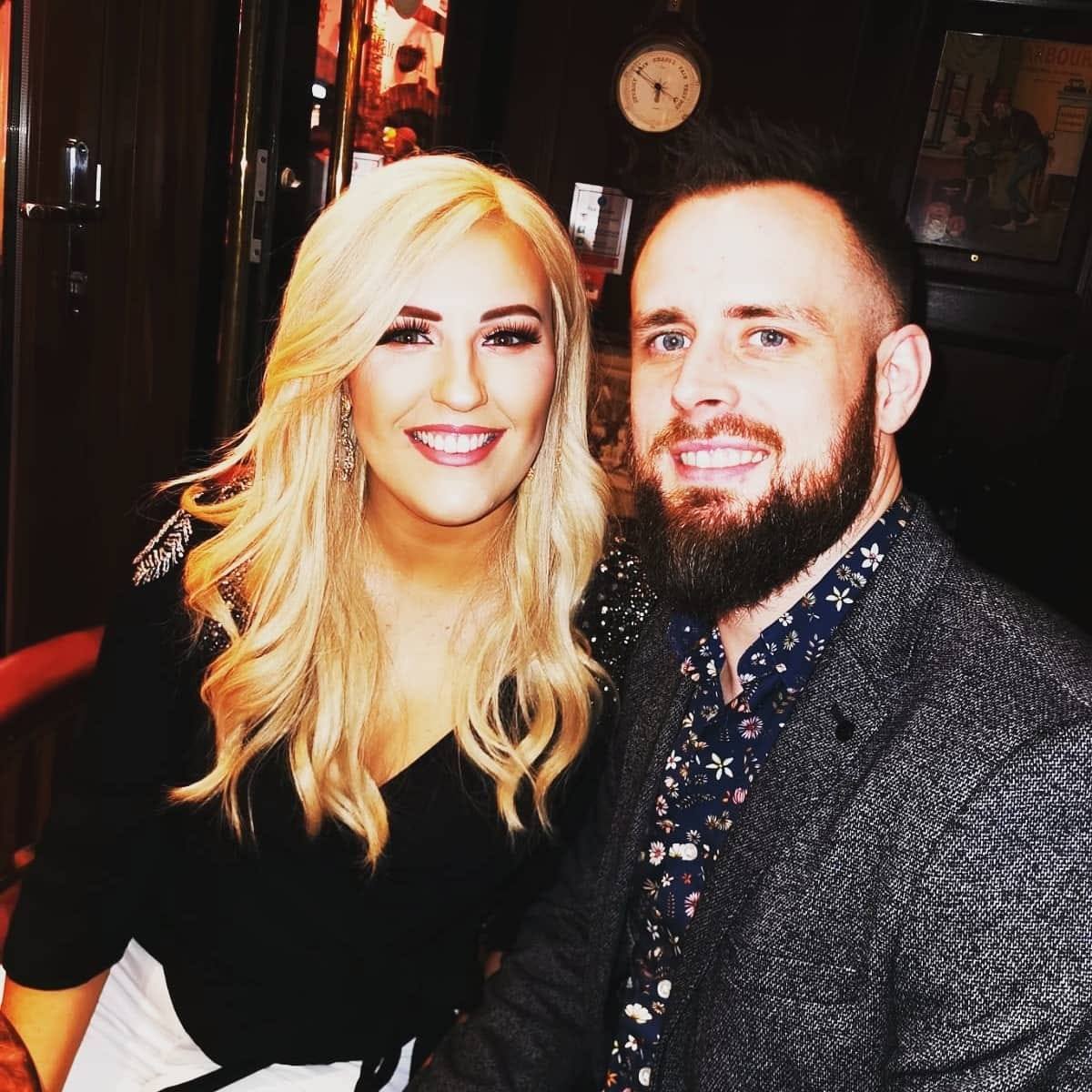 Niamh with partner Christopher Kiely, who has been a huge support to her throughout her journey.

The devastation of missing her friend's wedding and the trauma of losing her hair was a double whammy and after ringing her sister in tears, her siblings rushed to her side to offer support.

“I cried my head off first and then we talked about things from our childhood and had a good night's craic,” she said.

“We were just carrying on, and it was huge, because at that point I was hysterical. I had rung my wee sister sounding like I was bawling and screaming down the phone.

“She got the other two and they came down. It was really good that I didn't sit at home that night crying because I was missing my friend's wedding and because I had no hair.

“I was completely consumed by it, there was no way I was getting myself out of that headspace, so my sisters and brother were able to do that.

“My partner too is one of the main reasons I got through this. His love for me has never changed and he never treated me any differently because of it and I just feel so lucky to have him in my life.”

The sense of normality provided by her siblings and partner that evening was just the beginning of a process that would help Niamh come to terms with her alopecia.

A pre-planned trip to Las Vegas with some friends proved to be just the tonic she needed.

“That was in September and then I went to Vegas in October,” she said.

“It was a turning point, because I had got a wig for going to Vegas. You think you can't do things like the pool and roller coasters, but I made myself go and do them anyway.

“I just wore my wig at the pool and if I was going in, I would tie it up with a headscarf so it looked as if I was trying to protect my hair; which I was. 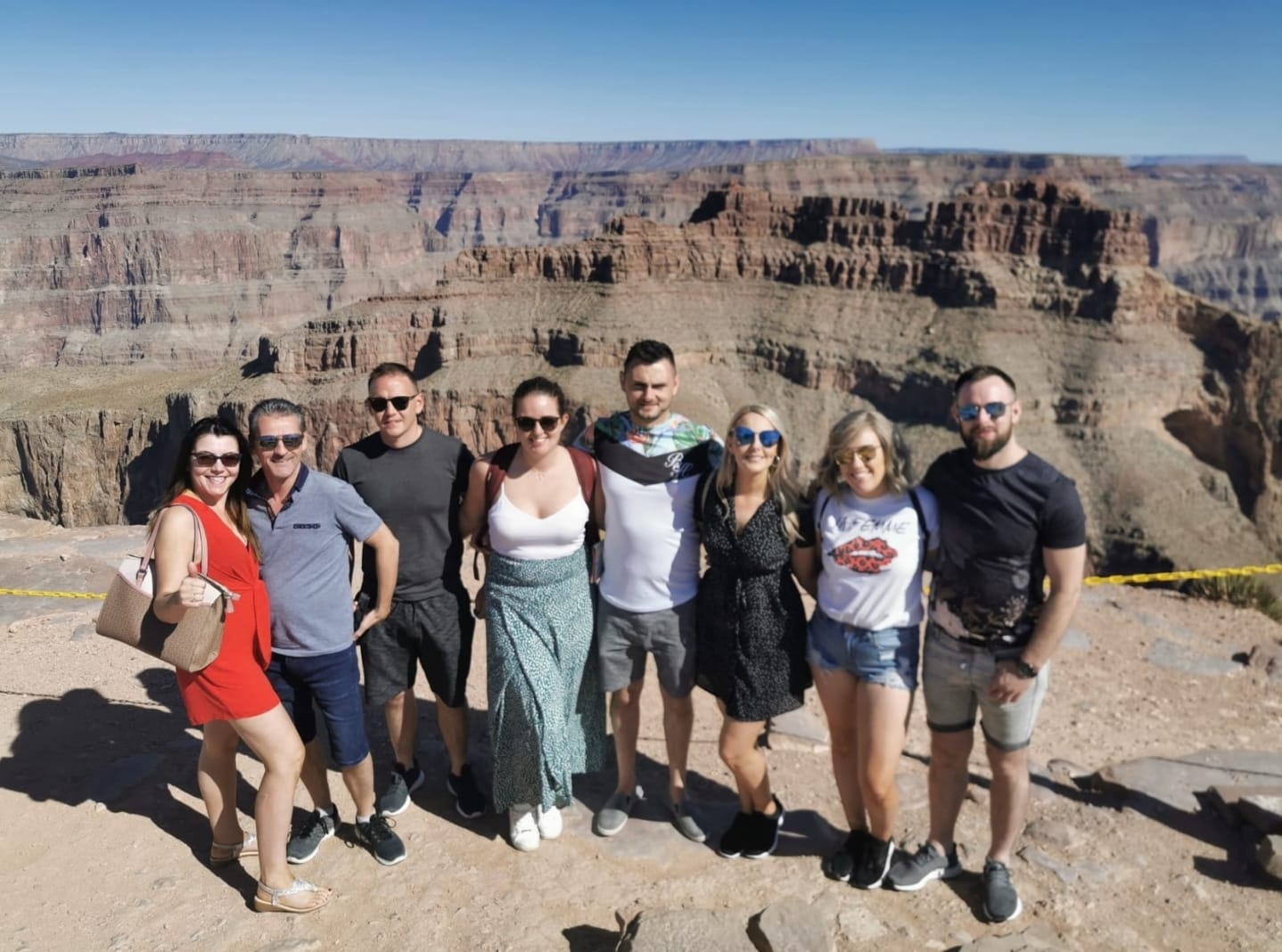 Niamh with her friends at the Grand Canyon during her Las Vegas trip.

What happened in Vegas did not stay there, and Niamh arrived home with a renewed will to focus on the positives of living with alopecia.

“With alopecia you get two synthetic wigs or one human hair wig per year on the NHS,” she said.

“I am an absolute wig addict now; I have sixteen wigs and when my other NHS one comes next week, that will be seventeen.

“When people write at the start of their alopecia journey and say how afraid they are, I always say about the perks of being able to change your hair every day of the week.

“You can go from long blonde hair, to short pink hair, or peach hair or whatever you're feeling that day, and that's exactly what I do. You get to experiment with your look a lot.

“Being a hairdresser, I know you could never have that luxury with your biological hair, because it would just wreck your hair.”

Niamh's experience has also opened her eyes to the relevance of hair to the perception of beauty and femininity, and led her to challenge the traditional stereotypes.

It has also saved her both time and money.

“Women spend so much money on hair removal; there's a whole industry built around it,” she said.

“Does me being completely smooth from the neck down make me more feminine than a girl who spends £100 a month on hair removal, but has a full head of hair?

“Hair on your head makes you more feminine, yet hair from the neck down makes you less feminine. This has been a wake-up call for how society views women and how natural isn't always accepted.

“Now my natural is completely bald. If I was to go out without a wig or make-up on, I would be mistaken for a man. 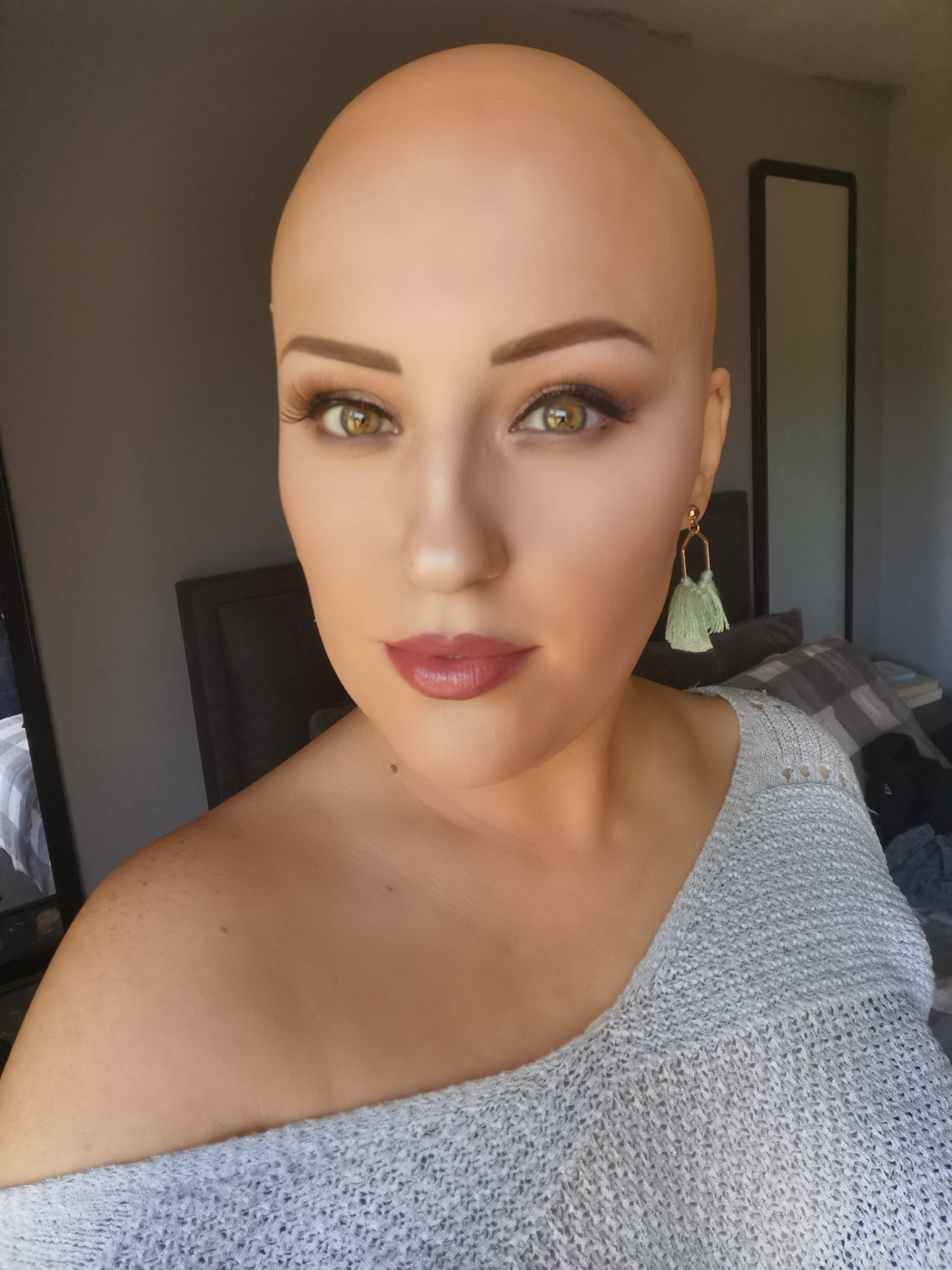 “If people see you bald and realise you're a woman, generally, they will look at you with sympathy, as if you're sick. People assume you're getting treatment.

“It's very hard to try and go past that societal pressure. I don't go out without a wig, but that's just because it's absolutely freezing in this country!”

Niamh has been lucky to have a strong support network around her, but many with the condition, particularly in Northern Ireland, find things difficult.

“Alopecia universalis is not something people even know exists,” she said.

“It's very under-researched, because it is not seen as physically disabling or medical emergency. Life is 100% okay and normal in the sense that I don't need to stay at home or take medication.

“There are no face-to-face support groups in Northern Ireland. The only link to the alopecia world I have is virtual; it's on my phone.

“It's great that we have that, because 10-15 years ago, it wouldn't have been a thing. I am so thankful it happened to me now and not ten years ago, when there wasn't that online community.

“There isn't face-to-face support here for anybody. There is no suppor t for teenagers, parents or anyone here in Northern Ireland. That's really, really bad.

“It is something – obviously after Covid – I'll be looking into. There are support groups all over the UK, but none in Northern Ireland.”

Instagram's visual platorm has provided Niamh with an opportunity to showcase the positivity of living with alopecia. Her handle, @thebalddoll, has a uniquely local feel to it.

“It is our way of saying it, but it also works on Instagram,” she said.

“If you were explaining to somebody who you were on about, you would say, 'your doll, that bald doll', and I thought it sounded like an Instagram handle, so I chose that. 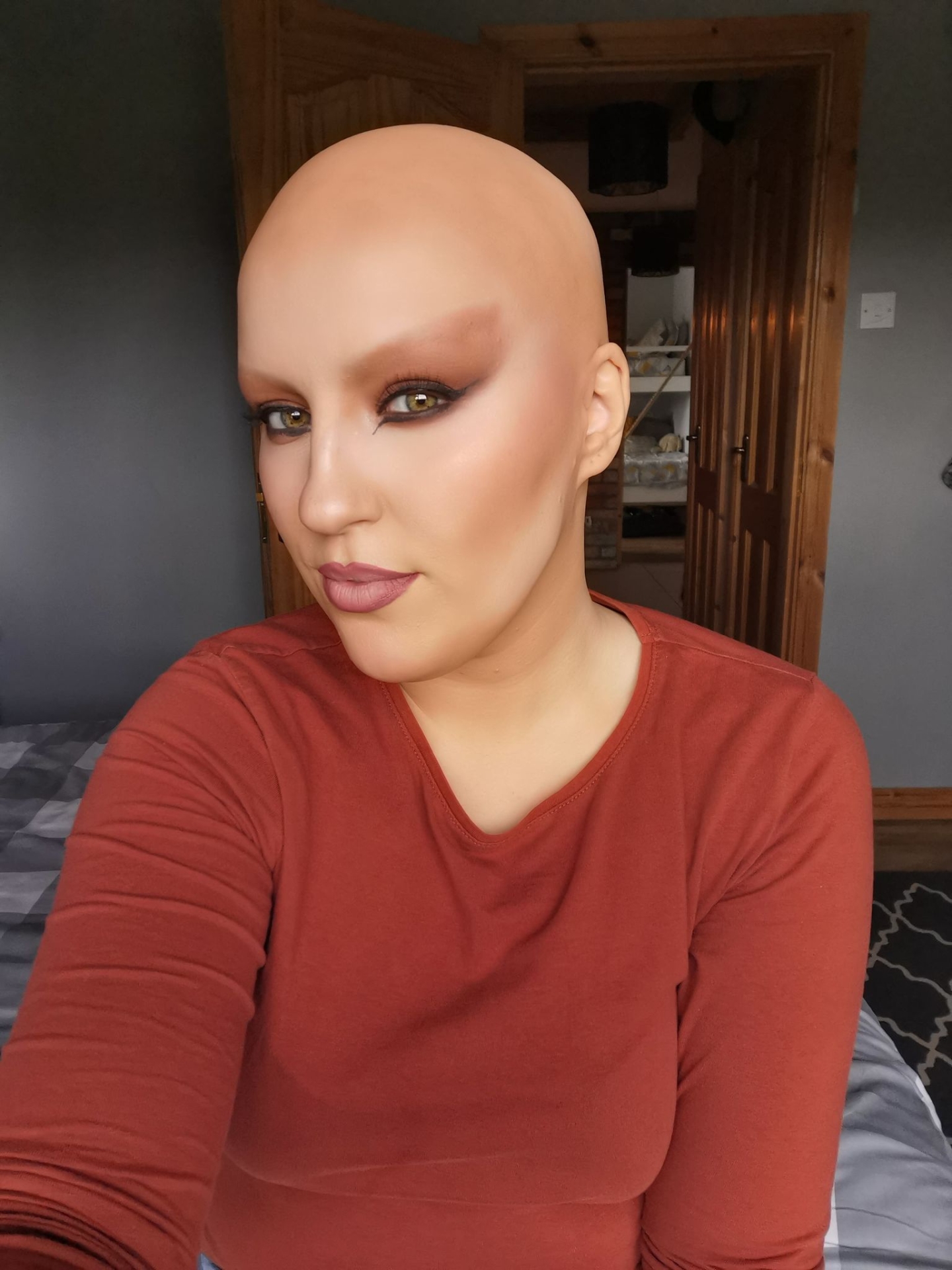 “There are a few from Northern Ireland that have reached out and found the page. There is such a lovely community on Instagram.

“You don't feel so alone, because you see so many women with bald heads. I feel like it's really normal, but obviously you don't see it as often here.”

The 29-year-old's message to those who have just been diagnosed with the condition is simple: make the most of it.

“Take the opportunity. Things get handed to you in life that you can't control, and it's how you deal with it and perceive it that will make it easier,” she said.

“There are huge benefits to alopecia when you look for them. As terrifying as it is at the start – and the fallout is traumatic – there is massive light at the end of the tunnel.

“I love the fact I can change my hair every day, and change my look. I don't have to do all the things women normally have to do; I can get ready in fifteen minutes!

“Being bald is not as bad as you can imagine in your head. The thought of being bald is a lot scarier.”

Alopecia UK helps those living with the condition to connect with each other and access support. Visit their website here.